The Big Ten regular season officially wrapped up on Sunday with four games featuring some of the conference's top teams and some of its bottom teams. It has been a thrilling season and it has setup well for a great postseason starting in Indianapolis with the Big Ten Tournament. Indiana won the Big Ten regular season, but would they come in as No. 1 in the final Power Rankings of the season?

The Spartans had two intriguing games to conclude the regular season and continue the team's red hot finish to the season. Fortunately, Michigan State took care of business on the road against Rutgers and at home against Ohio State. With the two wins, the Spartans have now won six in a row and 10 of the team's last 11 games. The two wins put the team at 26-5 overall, 13-5 in the Big Ten, and in serious running for a No. 1 seed in the NCAA Tournament.

Overall, Michigan State received 68.0 percent of the first place votes this week. The Spartans will enter the Big Ten Tournament as the No. 2 seed and in prime position to win the tournament and get a No. 1 seed on Selection Sunday for the NCAA Tournament.

The Hoosiers had an incredibly tough final week of the regular season, but were able to come out on top in each of the team's final two games. Things started with a hard fought win over Iowa on the road and followed with a key Senior Night win over Maryland at home. Doubts or not, Indiana won the Big Ten title outright and will enter the Big Ten Tournament as a No. 1 seed. Notably, Indiana has won five in a row and 20 of its last 23 games.

Overall, Indiana received 28.0 percent of the first place votes this week. With Indiana winning the conference crown, the Hoosiers will be the No. 1 overall seed in the Big Ten Tournament and will face either Michigan or Northwestern in the team's first game on Friday.

The Boilermakers had two challenging games this week and came out on top in both contests. Things started with a tricky road game against Nebraska and finished with a matchup against a red hot Wisconsin team. With the two wins, Purdue has now won three games in a row and earned itself a double-bye in the Big Ten Tournament.

Purdue didn't get any first place votes this week, but clearly appears to be trending up and in position to really become one of the conference's top contenders. Thanks to its late season success, Purdue will be the No. 4 seed and will likely face Iowa in its first Big Ten Tournament game on Friday.

The Badgers split the team's games this week by winning on the road to arch-rival Minnesota and dropping a tough game on Sunday night against Purdue. Still, even with the split, Wisconsin has won 11 of its last 13 games and locked itself up a bid for the NCAA Tournament on Selection Sunday. Overall, the Badgers are now 20-11 and have a 12-6 record in Big Ten play.

With the loss on Sunday, Wisconsin dropped to the No. 6 seed in the Big Ten Tournament and will likely face Nebraska on Thursday evening. If the Badgers win, the team will face Maryland on Friday.

The Terps had two games this week and split them by winning at home against Illinois and losing on the road against Indiana. With the split, Maryland is just 2-4 over its last six games and doesn't have a notable win since its victory over Purdue in early February. Nonetheless, the Terps are still 24-7 overall and are the No. 3 seed in the Big Ten Tournament. If the team can find a way to take care of its first game against Nebraska, Rutgers, or Wisconsin, it would certainly be in a decent spot heading into Selection Sunday.

The Hawkeyes also split the team's games this week with a loss to Indiana at home and a win over a desperate Michigan team on the road on Saturday night. Notably, Iowa's win over Michigan on Saturday was the team's first win since Valentine's Day and its first over a top 100 KenPom team since January. Iowa is now a No. 5 seed in the Big Ten Tournament and will face either Illinois or Minnesota in its first game and potentially Purdue in its second game. Overall, seeing Iowa make a run on its side of the bracket wouldn't be that unrealistic.

The Wolverines only had one game this week and came up short against Iowa at home. It was a vital game for Michigan's NCAA at-large hopes and will put a ton of pressure on the team heading into the Big Ten Tournament. Undoubtedly, it will take at least a win to get a spot on Selection Sunday and maybe even two. With Northwestern on Thursday and Indiana waiting on Friday, that isn't going to be an easy task. In fact, KenPom gives Michigan just 57 percent odds to even get through the Wildcats. The pressure will be on.

The Buckeyes had just one game this week and dropped it on the road to a talented Michigan State team. Unfortunately, the loss was a big blow to Ohio State's hopes for an NCAA at-large bid and will leave the Buckeyes searching for at least two wins in Indianapolis to make the field. Now, the team will get a tricky Penn State team on Thursday with a potential rematch against Michigan State on Friday. As such, it's hard not to think the Buckeyes will land in the NIT on Selection Sunday.

The Wildcats had two games this week and took care of business against Penn State on the road and Nebraska at home. Northwestern has now won three in a row and is 5-3 over its last eight games. With the wins, Northwestern was able to move into the No. 9 seed in the Big Ten Tournament and will face Michigan on Thursday with Indiana waiting on Friday. This is a chance to add another intriguing win or two to help the team's NIT bid.

The Nittany Lions had a crucial two games this week against Northwestern and Illinois at home. With two wins, the team could get into great position for the Big Ten Tournament. Unfortunately, things didn't go as planned and Penn State was only able to split the games. 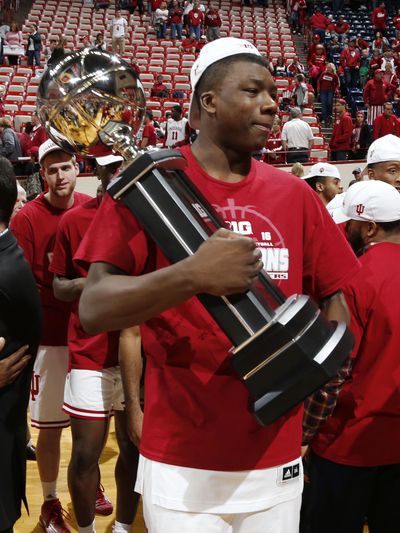 With the split, Penn State landed as the No. 10 seed in the Big Ten Tournament and will have an opening round matchup against Ohio State on Thursday.

The Huskers had two games this week against Purdue at home and Northwestern on the road and dropped both games. With the two losses, Nebraska fell to 6-12 in Big Ten play and was set as the No. 11 seed for this year's Big Ten Tournament. The team has now lost five games in a row and nine of its last 11 games. The Huskers will have to hope that a first round matchup with Rutgers on Wednesday will get the team back on track.

The Illini had two games this week and came up short in both with losses on the road to Maryland and Penn State. With the two losses, Illinois dropped to 13-18 overall and 5-13 in the Big Ten. Illinois has now failed to get back-to-back wins since December and will hope to do just that in the Big Ten Tournament. The team is seeded No. 12 in the Big Ten Tournament and will face Minnesota on Wednesday with a chance to face Iowa on Thursday. Without at least a few wins, it's hard to imagine Illinois having a postseason.

The Gophers had two games this week and lost handily to both Wisconsin and Rutgers. They were certainly disappointing losses, but given that Minnesota is extremely short handed, neither was too surprising. With the two losses, Minnesota dropped to just 8-22 overall and 2-16 in the Big Ten. The team will be the No. 13 seed in the Big Ten Tournament and will have to hope a matchup with Illinois and then potentially Iowa can rectify the issues.

The Scarlet Knights finally got a conference win. The team was just one game away from going 0-18 in conference play, but were able to pull out a lopsided win over Minnesota. Now, Rutgers will still be the No. 14 seed in the Big Ten Tournament and will have an uphill battle, but it was a noteworthy win for the players in the program. The Scarlet Knights will get Nebraska on Wednesday for a chance to face Wisconsin on Thursday.

One of the interesting things to watch over the season is how teams trend. There is of course movement in the conference on a weekly basis, but some teams take enormous steps forward or backward from preseason expectations. We have compiled full charts on how each team trended this season.