Heading into last week, it looked like a period that could really separate some of the conference's contenders from pretenders and looking back, that was certainly true. Teams like Iowa, Maryland, and Michigan State continued to emerge while teams like Indiana and Michigan struggled. Now, the pressure is building for teams as March approaches, which should make a really dramatic final month of the season.

With that, here are BTPowerhouse's week 13 Big Ten power rankings.

The Hawkeyes had a relatively quiet week with games against Penn State at home and Illinois on the road. All told, Iowa was able to take care of business and grab two wins. Thanks to these two wins, Iowa is now solely in first place in the conference standings and has a 10-1 record in Big Ten play.

Overall, Iowa received 68.1 percent of the first place votes this week. It's a bit surprising to see the number that low, but with the rise of Maryland, it's not that surprising. Iowa gets two big games with Indiana on the road on Thursday and Minnesota at home on Sunday. With two wins, the Hawkeyes would be in outstanding position to win the Big Ten regular season crown.

The Terps had what looked like a challenging week with Nebraska on the road and Purdue at home, but were able to come out on top in both games and push the team's record to 10-2 in conference play. After the rough start to Big Ten play, Maryland is now playing red hot and looks like the team that might be a legitimate title contender considering its relatively manageable closing stretch.

Overall, the Terps received 27.3 percent of first place votes this week. Maryland has a non-conference game on Tuesday against Bowie State in a potential trap game, then Wisconsin at home on Saturday.

The Spartans only had one game this week and looked very impressive in it. Michigan State had to go on the road to face arch-rival Michigan and completely dominated the Wolverines from start to finish. The Spartans have now won four games in a row with three of the wins coming in blowout fashion. Considering the only close game was a win over Maryland, that's a pretty impressive stretch.

Michigan State continued to receive a single first place vote this week and looks to be a potential darkhorse to move to the top of the Big Ten. With Purdue on the road and Indiana at home, the Spartans have a huge opportunity to solidify itself as a top team in the conference and make its stake as a potential Big Ten title contender.

The Hoosiers had a very mixed week of play. After starting with a massive road win over Michigan early in the week, Indiana followed it up by dropping a shocker on the road to Penn State. It was certainly a rough loss and now puts the team behind Iowa in the conference standings with just seven games left.

The good news is that with Iowa at home and Michigan State on the road this week, the Hoosiers have an opportunity to turn things around quickly if things go right. Undoubtedly, this will be the week that decides whether Indiana is a legitimate Big Ten title contender.

The Boilermakers only had one game last week and dropped it on the road to Maryland. Overall, Purdue's resume still remains strong. The team is 19-5 overall and 7-4 in the Big Ten. Unfortunately, that resume is still a decent hunk behind the top teams in the Big Ten.

The good news for Purdue is that with a huge upcoming week with Michigan State at home and Michigan on the road, the Boilermakers have a chance to make a huge move up the Big Ten standings and in seeding for the NCAA Tournament. A Big Ten title run is pretty unlikely at this point, but if Purdue can win both games, it certainly has to at least be in the conversation.

The Wolverines had a horrible week of play. Coming in, it looked like this could be a key week for Michigan with Indiana and rival Michigan State at home. With two wins, the Wolverines could make a real run toward the top of the Big Ten and secure an NCAA Tournament bid. Unfortunately, Michigan was completely dominated in both games. Now, the Wolverines are going to have to face a pretty tough closing stretch as the team tries to make this year's NCAA Tournament. Michigan will get Minnesota on the road and Purdue at home as it hopes to rebound.

The Badgers only had one game this week, but it was a huge one with Ohio State at home. Both teams were competing for an NCAA Tournament berth and positioning in the Big Ten and the game functioned as an unofficial NCAA Tournament elimination game. Ultimately, Wisconsin found a way to come out on top and the team has now won five games in a row, including wins over Indiana and Michigan State. With Nebraska at home and Maryland on the road this week, things will remain tough, but Wisconsin looks like it's hitting its stride at the right time.

The Buckeyes only had one game this week and it was on the road against Wisconsin. As has been detailed in length, Ohio State is clinging to any hopes at an NCAA Tournament at-large berth and this was a key game in making a run. Unfortunately, Ohio State fell on the road and now finds itself at just 14-10 overall and 6-5 in Big Ten play. At this point, it will likely take a near flawless run to close the season and it will have to start at home against Northwestern and on the road against Rutgers this week.

The Wildcats only had one game this week and it came against Minnesota at home. Luckily, Northwestern found a way to win and ended its five game skid. Unfortunately, the issue for the Wildcats largely remains unchanged. The team's resume is weak and almost entirely reliant on wins over underwhelming teams. With Ohio State on the road and Illinois at home this week, perhaps the team can get two decent wins to add to its resume.

The Huskers had a mixed slate of games last week with both Maryland and Rutgers at home. As expected, Nebraska fell to Maryland, but beat Rutgers at home. At this point, it would likely take perfection to make the NCAA Tournament down the stretch and some big wins to even guarantee an NIT bid. 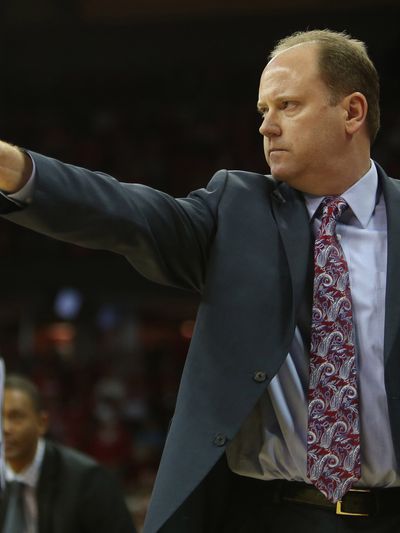 BTPowerhouse looks at the turnaround of Wisconsin under Greg Gard.

With Wisconsin on the road and Penn State at home this week, perhaps Nebraska can build some major momentum. If not, it could be a rough last few weeks of the season for the Huskers.

The Nittany Lions had a really successful week. The team did drop its first game on the road against Iowa, but followed it up with a massive upset of Indiana at home over the week. Under Pat Chambers, Penn State has seemed to get at least one major upset each year and this certainly fits the bill. With the win, the Nittany Lions now sit at 12-12 overall and are hoping for a late run to make the NIT. This week, Penn State gets Nebraska on the road.

The Illini had a chance to make some major noise this week with Rutgers on the road and Iowa at home. Unfortunately, things didn't go all too well. Illinois started by barely beating Rutgers in triple overtime and followed it up with a loss to the Hawkeyes. Now, the team sits at just 11-13 overall and it looks like an NIT bid might be out of the picture at this point. The Illini only get one game this week with rival Northwestern on the road.

The Gophers only had one game this week and came up short on the road against Northwestern. With the loss, Minnesota dropped to 0-11 in conference play. It's been a rough season so far, but the team does seem to be getting a tad more competitive in recent weeks. Perhaps the team can get its first conference win against Michigan at home or Iowa on the road this week.

The Scarlet Knights had two games this week and unsurprisingly, came up short in both. The first was a triple overtime loss to Illinois at home and the second was a blowout loss to Nebraska on the road. Rutgers has now lost 26 games in a row against Big Ten opponents and is 6-18 overall this season.