With less than one week left in regular season play, the Big Ten picture continues to get more complicated. Teams like Michigan State and Wisconsin are thriving while others like Iowa and Michigan have struggled to string together consistency. As such, the conference picture looks incredibly convoluted.

With that, here are BTPowerhouse's week 16 Big Ten power rankings.

The Spartans had two tricky games this week and found a way to come out on top in both. The first was a road game at Ohio State and the second was a home matchup against a dangerous Penn State team. With the two wins, Michigan State moved up to a tie for second in the Big Ten standings and have won eight of the team's last nine games. One would be hard pressed to find a team playing better right now.

Overall, Michigan State received 72.7 percent of the first place votes this week. The Spartans have been on an incredible run and legitimately look like a national title contender. With Rutgers on the road and Ohio State at home this week, there are two more opportunities to pad the record.

The Hoosiers only had one game this week and were able to take care of business in it on the road against Illinois. With the win and the losses by Iowa and Maryland over the weekend, Indiana officially clinched at least a share of the Big Ten title. It's been quite a midseason turnaround for a team that looked like it would be on the NCAA bubble early in non-conference play.

Overall, Indiana received 22.7 first place votes this week. The good news for the Hoosiers is that the team can really make a statement this week with Iowa on the road and Maryland at home. Find a way to win those two games and not only would Indiana win the Big Ten outright, but it would really improve its NCAA seeding.

The Boilermakers only had one game this week and came out on top at home against Maryland. With the win, Purdue pushed its record to 22-7 overall and is quietly putting together a really good resume. Notably, Purdue hasn't lost back-to-back games all season and now has two top 10 wins on its resume.

Despite not receiving any first place votes this week, Purdue really moved up in the standings thanks to some struggles for other teams and has a chance to move up even more with Nebraska on the road and Wisconsin at home this week. Those are two very winnable games and both would add to the team's resume.

The Badgers continued the team's resurgence with a road win over Iowa and a home win over Michigan this week. With the two wins, Wisconsin improved to 19-10 overall and has now won 10 of its last 11, including wins over every other Big Ten team in the top six in the current conference standings. For a team that looked like it would be on the NIT bubble a few weeks ago, that's a tremendous improvement.

Unfortunately, the Badgers will get two tricky road games this week against arch-rival Minnesota and Purdue. If Wisconsin can find a way to win both of those two games, the Badgers would actually have a chance to grab a share of the Big Ten title and a double-bye in the Big Ten Tournament.

The Terps only had one game this week and dropped it on the road against Purdue. It was actually a pretty competitive game in the final minutes, but it was the third loss in the last four games for Maryland. With the loss, the team dropped to 11-5 in Big Ten play and many are questioning where this team will end up finishing. This week, Maryland gets Illinois at home and Indiana on the road in two big opportunities to get back on track.

The Hawkeyes easily had the team's worst week of Big Ten play this season. Things started with a disappointing loss at home to Wisconsin and ended with a surprising loss on the road to Ohio State. Neither would have been that bad by itself, but with both in back-to-back games, it was a really rough performance. With the two losses, Iowa dropped to just 11-5 in conference and now needs help to win the Big Ten title. The Hawkeyes will have to hope to get back on track against Indiana at home and Michigan on the road to end the season.

The Buckeyes had a really tough slate this week and were able to split the games after dropping to Michigan State and beating Iowa at home. Undoubtedly, Ohio State still has work to do, but the Buckeyes are still a potential NCAA Tournament team at this juncture. With a matchup against Michigan State on the road this weekend, Ohio State will have a chance to really move up in the bracket projections and potentially even secure a bid with a win. Otherwise, the team's hopes will lie in the Big Ten Tournament.

The Wolverines had two games and split them by winning against Northwestern at home and dropping the team's final road game of the regular season against Wisconsin. It certainly was good enough to keep Michigan in the bubble picture, but with just one noteworthy win in the team's last eight games, it's hard to argue that the Wolverines are trending up. It will be a huge final week in Ann Arbor as Michigan hosts Iowa on Saturday in what could very well be a "win and get in" type of scenario.

The Wildcats had two games this week and split them by dropping on the road to Michigan and completely dismantling Rutgers at home. With the split, Northwestern moved to 6-10 in Big Ten play and has a huge opportunity to secure the No. 9 seed in the Big Ten Tournament and a potential NIT bid with two upcoming games against Penn State and Nebraska. All three teams are tied in the standings, so any win would be huge.

The Nittany Lions started the week with a key home win against Nebraska, but followed it with a tough loss on the road to a very talented Michigan State team. Thanks to the split, Penn State now sits at 6-10 in Big Ten Play with two home games left against Northwestern and Illinois. 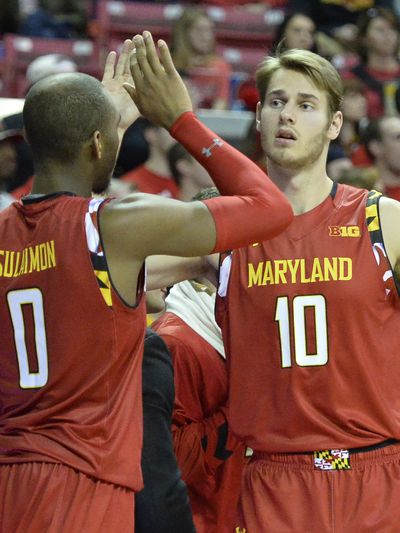 With that schedule, the team likely has its Big Ten Tournament destiny in its control and should clinch the No. 9 seed with two wins. An NIT bid is still far from guaranteed, by two wins would go a long way in reaching that goal.

The Huskers only had one game this week and lost on the road to Penn State. At this point, it's pretty difficult to see Nebraska making the NIT field, but the team certainly still has a shot to get a bye in the Big Ten Tournament and avoid one of the Wednesday games. With Purdue at home and Northwestern on the road, the Huskers will have two big opportunities to help their chances in securing the No. 10 seed or higher.

The Illini splits its games this week with a loss to Indiana and a win over Minnesota at home. With the split, Illinois sits at just 13-16 overall. An at-large bid to the NCAA Tournament or NIT is out of the picture at this point, but the Illini can help secure a better seed in the Big Ten Tournament with two wins this week and potentially get in position to make a run in Indy. However, with road games against Maryland and Penn State, it won't be easy.

The Gophers split the team's games this week with a win over Rutgers and a road loss to Illinois. It's been a horrific season so far for Minnesota, but it can avoid a last place finish in the Big Ten if it can win at least one game this week. With arch-rival Wisconsin at home and Rutgers at home, it will have two key opportunities. Plus, fans would certainly be excited if the team can find a way to knock off the Badgers at home.

Currently, the No. 14 spot in the BTPowerhouse Big Ten Power Rankings is vacant.