Well, another big week and the incredible storylines have continued. The surprising emergence of Iowa, the inconsistent play from Maryland, and the struggles of teams like Illinois and Wisconsin are just a few. The standings are finally starting to sort out and it looks like the championship contenders are emerging.

With that, here are BTPowerhouse's week 11 Big Ten power rankings.

The Hawkeyes had another impressive week of play with two double-digit wins over Rutgers on the road and Purdue at home. With the wins, Iowa pushed its record to 16-3 overall and 7-0 in conference play. In just seven games, Iowa has swept Michigan State and Purdue and beaten tricky Michigan and Nebraska teams at home.

Overall, Iowa received all but one first place vote this week. However, it should be noted that the only first place vote Iowa didn't get came from the RPI, where Maryland still has a slight lead on the Hawkeyes. So, the human voters were unanimous in selecting Iowa as the No. 1 team in the Big Ten.

The Hawkeyes will go on the road to face Maryland and will face Northwestern at home this week.

The Hoosiers had a pretty manageable week on the schedule with Illinois and Northwestern at home and were able to capitalize with two blowout wins. Neither game was competitive and Indiana was really able to flex its muscles in each of the two matchups. The Hoosiers improved to 7-0 in the Big Ten and are in position to not only finish near the top of the Big Ten, but truly contend for the title.

Despite not receiving any first place votes, Indiana took a major step up in the standings. Perhaps the Hoosiers can get a little more appreciation after this week with Wisconsin on the road and Minnesota at home. Indiana is looking for quality wins in Big Ten play and will have a shot at one this week.

The Terps had a pretty underwhelming week despite going 1-1 in the team's two games. To start, Northwestern pushed Maryland into overtime at home and though the Terps came out on top, it took quite a bit for the team to pull off the win. Then, Maryland went on the road and lost a tough game to a reeling Michigan State team that had lost its previous three games, including at home to Nebraska. With the loss, Maryland is 6-2 in conference play.

Overall, Maryland received a single first place vote, which came from the RPI rankings. However, the Terps will have everything in the team's hands this week with Iowa at home and Ohio State on the road. If Maryland wins those two games, the team will have a serious shot at No. 1 next week.

The Spartans had an incredibly mixed week of action. It started with a loss at home to Nebraska to drop Michigan State to just 3-4 in Big Ten play, but ended with a huge win at home over Maryland at home. It's going to take a miraculous run to get back in the Big Ten title hunt considering MSU already has four losses, but the win over Maryland certainly raised the team's confidence level heading forward.

Overall, the Spartans didn't receive any first place votes yet again this week. Nonetheless, don't expect a ton to change next week considering that Michigan State plays Northwestern on the road and Rutgers at home.

The Boilermakers had the rare three game week and had a solid, but not great performance. It started with a dominating win over Rutgers on the road and a win over Ohio State at home, but ended in disappointing fashion with a road loss to Iowa. Given how the Hawkeyes have been playing though, dropping that Iowa game is far from embarrassing.

Still, it did drop Purdue to 5-3 in the Big Ten and time is starting to run out for Purdue on a Big Ten title run. This week, the Boilermakers will get Minnesota on the road and Nebraska at home. If Purdue really does stand a chance of making a big run, it has to find a way to win both of these games.

The Wolverines had a pretty manageable slate this week and were able to take care of business at home against Minnesota and Nebraska on the road. With the two wins, Michigan is sitting at 5-2 in conference play with just one of its next six games on the road. There are no guarantees, but things are starting to set up pretty well for the Wolverines to make a serious run in Big Ten play. In fact, KenPom gives Michigan 50 percent of better odds in each of its next seven games. This week, Michigan gets Rutgers at home and Penn State in New York City.

The Badgers had a quiet, but successful week. The team only had one game, but were able to go on the road and get a win over Penn State. Though any NCAA at-large hopes are still probably out the window, Wisconsin has a big opportunity to help itself in the conference standings and help its NIT positioning with Indiana at home and Illinois on the road this week. Both games are certainly winnable and if the Badgers can find a way to come out on top, Wisconsin could establish itself as a really tough out for any teams in the conference.

The Buckeyes only had one game this week, but dropped it on the road against Purdue. Given how the last few weeks have unfolded, Ohio State is still probably the Big Ten's best shot at a seventh NCAA bid and if the team is going to make a run, it must start this week. With Penn State at home, Illinois on the road, and Maryland at home, there are three huge opportunities to add to the win total and secure at least one marquee win. Realistically speaking, Ohio State's at-large hopes could very well ride on this week.

The Huskers had a pretty successful week, all things considered. To start, Nebraska went on the road and knocked off Michigan State in the Breslin. However, the Huskers followed that up by dropping a tough one at home to Michigan. Fans were certainly hoping for two wins, but given how Nebraska has played this year, even scoring one huge upset is pretty nice. This week, the Huskers only face Purdue on the road.

The Wildcats had a really tough week with two road losses. The first was a tight loss to Maryland, but the second was a blowout loss to Indiana. Coming into the week, most probably expected Northwestern to lose both games, but the two losses really did come in disappointing fashion. 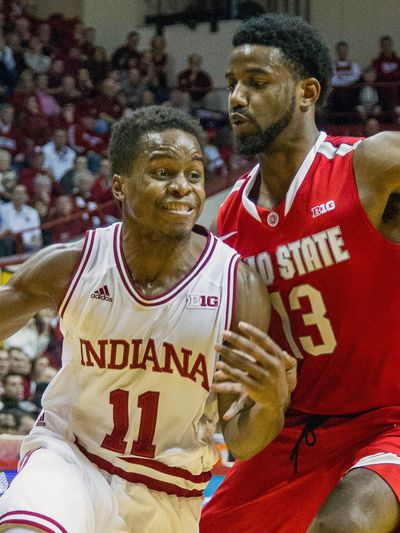 Now, the Wildcats sit at just 3-5 in conference play with Michigan State at home and Iowa on the road this week. At this point, an NCAA at-large bid is probably out the window, but the team still needs a marquee win to help its NIT cause. Those are two huge opportunities this week.

The Illini also had a mixed week of play. It started with a blowout loss on the road to Indiana, but followed with a tight overtime win over Minnesota on the road. Beating a Gophers team that's still winless in conference play probably isn't going to get many people excited, but this is an Illinois team that needs to score wins. Like many of the lower teams, the goal right now has to be to set up seeding for the Big Ten Tournament and help its NIT cause. With Ohio State and Wisconsin at home this week, the Illini could really help those causes with two wins.

The Nittany Lions only had one game this week and it ended in disappointing fashion at home to Wisconsin. The game was pretty competitive, but the Badgers took control in the second half and didn't look back. With the loss, Penn State dropped to 11-9 overall and 2-5 in the Big Ten. Now, with Ohio State on the road and Michigan in New York this week, perhaps Penn State can score a nice win to help its resume and to put a positive spin on the season.

The Gophers showed more fight this week, but still came up short on the road to Michigan and in overtime at home against Illinois. With the two losses, Minnesota is just 6-14 overall and 0-8 in Big Ten play. The only focus has to be to try and get the first conference win. Unfortunately with Purdue at home and Indiana on the road, it could be tough.

The Scarlet Knights had two games this week and lost handily in both. The loss to Purdue was by an incredible 50 points and the Boilermakers had more rebounds in the game than what Rutgers scored. It was closer against Iowa, but things fell apart late. Now, Rutgers gets Michigan and Michigan State on the road.