BTPowerhouse's staff counts down the best players in the Big Ten heading into the 2015-16 season.

In the months leading up to the 2015-16 college basketball season, BTPowerhouse will be releasing a new series called the 'BTPowerhouse 25,' which features the Top 25 players in the Big Ten as voted by members of the staff. All players set to be on Big Ten rosters for next season were eligible during the staff vote with their top selection receiving 25 points and their 25th and final selection receiving 1 point.

Today's edition will take a brief look at Kendrick Nunn of Illinois, who came in at #25 in the rankings. The Illini hope that he can be a key piece in helping the team get to the NCAA Tournament next season.

The Illini have underwhelmed over the last few seasons, but one player who has really become a quality piece in the lineup is Kendrick Nunn. He entered the conference with good, but not outstanding recruiting rankings, but really got off to a great start in 2013-14 when he made the All-Big Ten Freshman team. Though some were hoping for him to take a bigger step last year, he still was productive enough to earn him a spot on this list. 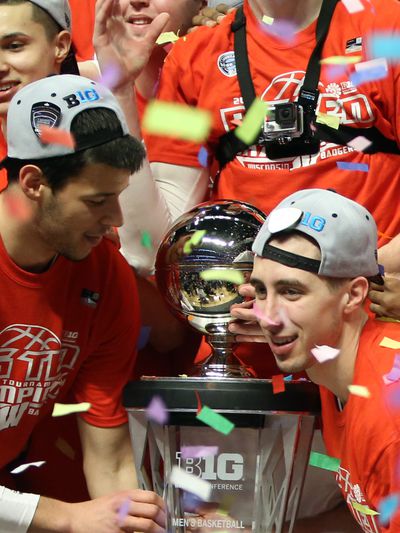 An in-depth look back at the 2014-15 season for the Big Ten conference.
Though Nunn is not a "lights out" shooter when compared to some of the best in the conference, he was a consistently good outside shooter and ended up leading the Illini in total 3PT makes last season and finished the season shooting 36% from 3PT range. Along with this, Nunn was relatively efficient with an offensive rating of 103.5 in 2014-15 and did a good job at avoiding turnovers with just a 13.8 turnover rate, which is really significant considering how much he was used in the Illini offense last season.

One specific area where Nunn can improve is with his interior game. There's no doubt that Nunn is never going to be a dominant force inside, but if he wants to elevate his game to the next level, even taking decent strides here would help significantly. For instance, during last season, Nunn made just 43.5% of his shots from 2PT range and just 41.7% during conference play. These numbers trailed behind teammates like Leron Black, Malcolm Hill, and Rayvonte Rice. Improving inside would also do a ton for Nunn's general efficiency as well, which is decent as noted above, but not great as his 48.3% effective field goal percentage indicates. Nunn will remain a quality player, even if he is unable to elevate his game inside, but if he is going to reach the next level, he will need to improve in these areas for next season.

It's hard to see Nunn being in the Big Ten Player of the Year of All-Big Ten discussion next year, but given the fact that he will likely get an even bigger role thanks to the exits of players like Rayvonte Rice, there is plenty of room for growth. Nunn will certainly have to improve inside if he is going to get into that top group of Big Ten players, but even with his current skillset, he should definitely be at least in the All-Big Ten Honorable Mention discussion.
***