The Big Ten's Best "Sharknado" Performances Of The 2014-15 Season

Sharknado 3 is out on the Syfy network today, and while its premise is pretty unbelievable. The results of these games were even more unlikely than a tornado full of sharks.

Share All sharing options for: The Big Ten's Best "Sharknado" Performances Of The 2014-15 Season

The Sharknado series and its The Asylum produced cousins have brought the world some really good "bad" movies. The newest entry in the series premieres tonight and even has some Big Ten flair with former Purdue Boilermaker Ryan Kerrigan making an appearance. We decided it would be fun to take a look at some Big Ten basketball performances that were as cringe-worthy as the acting and writing in Syfy's original movies.

Originally I planned to include the past 5 years, but last season had so many disappointments that I decided to just use 2014-15 (and let's be honest Rutgers losses only appear twice, but they could be the whole list).

I know Virginia is an incredible defensive team, but scoring less than 30 is more ridiculous than a Piranhaconda.

This match-up was supposed to be on the level of Mega Shark Versus Crocosaurus, but the Hoosiers didn't really come to play and this game was never even close. Rivalries between NCAA Tournament teams are not supposed to look like that.

Losing to the Chippewas is definitely not the worst result in Wildcats history, but losing by 13 at home is pretty embarrassing.

Not to diminish the Nittany Lions accomplishment, but they only won four Big Ten games in the regular season and they were all against the bottom of the league. So the Iowa Hawkeyes loss was still quite the disappointing performance. 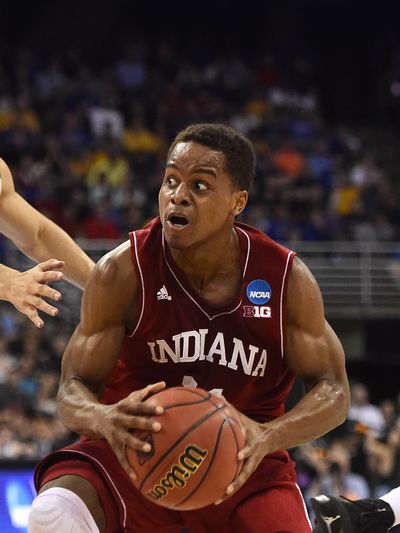 Losing to North Florida was not good, but at least the Ospreys made the Big Dance. Gardner-Webb should not put up 89 on a team that prides itself on defense, end of story.

The Spartans and their fans are usually pretty good at protecting home court, especially against lesser teams. Sure Mike Davis has Big Ten coaching experience, but he never won at the Breslin Center while at IU. You can bet this loss was mentioned a lot while Izzo motivated his team to a Final Four.

I still can't believe this one. Sure the Badgers were missing Frank Kaminsky and it was an away game, but Rutgers was sooooooooooo bad last year. This loss was completely inexplicable and inexcusable, I hope Bo made them run sprints for a week after.

Pinnacle Bank Arena only saw Huskers victories during its first year of existence. However, last year it was home to a loss against rival Creighton and then an inexplicable loss to the Cardinals. Nebrasketball was supposed to be a top tier Big Ten team in 2014-15, but after this game that thought faded rapidly.

This loss probably should have gotten the Scarlet Knights kicked out of the league on the spot. A team from the MAAC should not beat a Big Ten school, and they should never, ever, ever blow them out at home.

Oh, and they're called the Peacocks...seriously.

Not much to say about this game that hasn't already been said, and you can probably blame the Eastern Michigan loss on the hangover from this one. The Highlanders didn't even have a conference at the time and John Beilein's team was ranked. This game get the nod at number one simply because of the shock of it. NJIT's success was even more surprising than the popularity of the original Sharknado.