Aaron White's Departure: How Will The Iowa Hawkeyes Respond?

With star player Aaron White off to graduation, how will the Hawkeyes handle themselves next season?

Share All sharing options for: Aaron White's Departure: How Will The Iowa Hawkeyes Respond?

With a full load of talent on his roster, Fran McCaffery successfully brought his Iowa Hawkeye team back to its second straight NCAA appearance in 2015. While Iowa failed to make it out of the First Four in Dayton back in the 2014 NCAA Tournament, the Hawkeyes slaughtered Davidson 83-52 before falling to Gonzaga in the Round of 32 this year. A huge piece of Fran's success came from trusty senior Aaron White.

Aaron White led the Hawkeyes in points and rebounds with 16.4 and 7.3 respectively this past season. A go-to player with dynamic skill all over the floor, White will undoubtedly be missed as he graduates and moves on to a new stage in his basketball career.

But will McCaffery's squad be alright without him?

Iowa's success relied on the play of Aaron White. If he showed up, they won, if not, they lost. White averaged just 13.2 points in the Hawkeyes' losses, compared to 19.0 during wins. White only scored in single digits 5 times last season, and each time he did, his team lost. On the contrary, the Hawkeyes were 8-2 when White put up at least 20 points. As deep as this Iowa roster ran last season, a lot of trust was placed at the top with White and Uthoff. While Jarrod Uthoff will return next season and certainly get his fair share of minutes, a lot of other players will need to fill bigger roles.

Last season, Aaron White and Jarrod Uthoff both totaled over 1000 minutes during the season. The next closest guy for the Hawkeyes was Mike Gesell with 866, but everyone else falls at least 300 minutes short of the top two guys. Mike Gesell, Josh Oglesby and Gabriel Olaseni will all graduate, leaving behind Jarrod Uthoff and a plethora of players who will receive significantly more playing time next year. 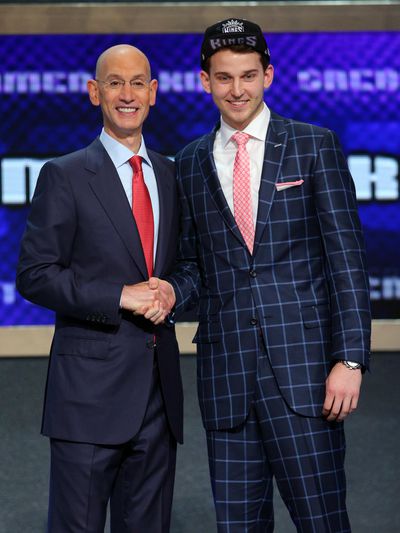 All the latest updates on the Big Ten in the 2015 NBA Draft.
In Aaron White alone, the Hawkeyes will lose 36% of its made free throws. White's ability to get to the line was unmatched by any other player on the team (238 attempts) as he out-attempted the nearest player, Gabriel Olaseni (120), by over 100. Getting to the stripe is key, and the remaining Hawkeyes are now left with the burden of finding someone who's willing to get fouled and make free throws.

Along with this, despite being 4 inches shorter, Aaron White managed to outrebound his 7'1" teammate Adam Woodbury by 72 boards throughout the course of the season. In White, the Hawkeyes will lose nearly 20% of their rebounding including 21% of their defensive rebounding. Woodbury and Uthoff will certainly have their hands full down low securing boards for their team.

Outside of the stat line, White provided something to this Hawkeye team that can't be described in numbers. White's passion and leadership were intangible qualities that made him Fran McCaffery's go-to guy. Whenever Iowa needed a big bucket or a big defensive stop, the fourth year senior was called upon to get the job done. Who will step up in his place?

It's uncertain what next season has in store for the Hawkeyes, but if we know anything about Fran McCaffery, we know that he finds a way to integrate a lot of good players into his system in order to win ball games. Though the lack of White's presence will certainly be felt on offense, defense, and on the overall morale of the team, the Hawkeyes will recover.

Jarrod Uthoff is ready to have a breakout season with the absence of his teammate White. The Wisconsin transfer will be heading into his third and final season with the Hawkeyes, and after averaging 12.4 points per game last season, he seems to be ready to take on an even bigger role. Expect him to prosper on both ends of the floor and serve as the go-to-guy down the stretch for the Iowa Hawkeyes.

Believe it or nor, it may not be a bad thing for Iowa to lose White. Sure the Hawkeyes lose a large piece of their scoring, but they're now required to play team basketball and rely on more than just one guy to win basketball games. A program that's centered around more than just one player will win basketball games even when some of the stars are struggling. Iowa has the capability to build around a few superstars next season. In addition to Uthoff, Adam Woodbury should do good things for Iowa entering his senior year, and guys like Peter Jok and Anthony Clemmons have the ability to step up and lead this Hawkeye team.

Iowa should be fine without Aaron White, but making a third straight NCAA appearance is going to rely on a number of key players filling more than just their roles next season.