Monday marks the second time Duke and Wisconsin will have played this season, but how did the two teams get to the second matchup?

Share All sharing options for: How the Wisconsin Badgers and Duke Blue Devils Went From The Big Ten-ACC Challenge To The National Championship Game

When the Wisconsin Badgers and the Duke Blue Devils get ready to take the opening tip in the 2015 National Championship game, it will be a game that wrote its first chapter last summer, when the 2014 Big Ten-ACC Challenge was announced.  It was then that fans knew that Duke would be traveling to Madison to set-up one of the best matchups of the non-conference season.

When the 2014-15 season kicked off, expectations were high for both Duke and Wisconsin.  In fact, both were ranked in the preseason Top 5 and both were considered to be serious contenders for the national championship.  Both teams had a few decent opponents in the first few weeks of the season, highlighted by Duke's matchup with Michigan State, but all eyes were already on the Duke and Wisconsin game before the season even started.

When December 3rd eventually hit, excitement for the game was red hot.  It was easily considered to be the best game of the 2014 Big Ten-ACC Challenge and the teams had a combined 14-0 record and each team had at least two wins over Top 50 KenPom teams.  It was set to be a matchup of heavyweights and would serve as a sign of things to come.

Before tip-off, KenPom gave the Badgers a 61.8% chance to win and though most considered it to be a relatively evenly matched game, the home court advantage was perceived to give Wisconsin the edge, especially given the fan excitement of facing a Top 5 Duke team at home.

From the opening tip, the game was a back and forth affair featuring big shot after big shot.  The Badgers briefly jumped out to a 6-2 lead before Duke gradually took control of the game.  At halftime, Duke held a narrow 35-32 lead, but they used crucial mid-range jumpers and 3PT shots to put it away in the 2nd Half.  Wisconsin did have a big run to start the 2nd Half, but after then, Duke took control and ended up winning 80-70.

The Blue Devils did shoot a solid 58.3% from long range, but only attempted 12 shots from behind the arc.  It was guys like Quinn Cook, Tyus Jones, and Rasheed Sulaimon hitting nice interior looks that allowed Duke to get the win with an impressive 1.29 points per possession.  Duke's 1.29 points per possession against Wisconsin was actually better than four of its NCAA Tournament wins.  The lone exception being Duke's matchup with #16 seed Robert Morris.  It was a big time performance on the road against a Wisconsin team that would ultimately become a #1 seed themselves. 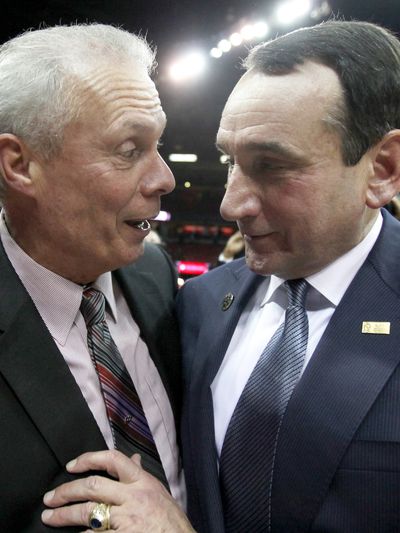 BTP takes a look at the 2015 Championship game between Wisconsin and Duke.

Since that matchup in early December, both teams have had much different paths to where they now meet.  Duke had a rough January stretch where they lost 3 of 6 games including a home game to NIT bound Miami.  The Blue Devils also saw Sulaimon depart from the team.  However, they also saw players like Matt Jones emerge and of course, the rise of freshman star Jahlil Okafor.  It was then that Duke really looked like a title contender.

Wisconsin faced some adversity as well, highlighted by their road loss to Rutgers, but largely took everything in stride.  In fact, in the 19 games following Wisconsin's matchup with Duke, the Badgers went 18-1.  The lone loss came to a terrible Rutgers team, but it was without star Frank Kaminsky.  The team also did see guard Traevon Jackson struggle with injury concerns, but Bronson Koenig emerged as a quality replacement.

Even in the NCAA Tournament, both teams have faced much different paths despite being #1 seeds.  From a seeding perspective, Wisconsin has faced the toughest possible path for a #1 seed to reach the National Championship game after beating a #1 seed, a #2 seed, a #4 seed, and a #8 seed.  Meanwhile, Duke faced a #2 seeded Gonzaga team, but was able to avoid #4 seeded Georgetown and faced a #7 seeded Michigan State in the Final Four.  Both teams certainly deserve to be in the title game, but it's hard not to think Wisconsin had a tougher path, especially considering they had to face an undefeated Kentucky team.

On Monday, the two teams will finally meet again in a rematch of their Big Ten-ACC Challenge meeting.  Though the rosters will be very similar to what fans saw in December, the two teams have faced much different paths through the regular season and through the NCAA Tournament.  Wisconsin has been the epitome of consistency and Duke has been a perfect example of raw talent starting to blossom.

Duke was hitting on all cylinders when they made their road trip to Madison, but the question for Monday night will be whether they can hit on all cylinders yet again.  Wisconsin has become a battle-tested group that has gone toe to toe with elite teams like Kentucky and Arizona and still managed to come out on top.  If the Blue Devils are going to win this time, they might just have to put together their best performance of this season because Wisconsin has come a long way since the first game and will be more ready than ever.