Sam Dekker's transformation over the last three seasons has turned him into one of the best college basketball players and arguably the player peaking the most at the right time. Today we look at Dekker's path to Wisconsin and how the junior has been so effective down the stretch.

Sheboygan, Wisconsin is a small town with just under 50,000 people. It sits 50 miles north of Milwaukee and 64 miles south of Green Bay, founded in 1846. The most famous natives and residents include athletes and government officials, but none have put Sheboygan on the map more emphatically than Sam Dekker.

Sam Dekker's story begins before the Sheboygan native stepped foot on the University of Wisconsin campus in Madison. The 6'7 lanky kid was a stud at Sheboygan Area Lutheran, averaging 35 points his senior season, good for the 17th overall recruit according to ESPN Recruiting. Dekker was the top ranked player in the state of Wisconsin, with the weight of the entire state on his shoulders before even stepping foot on campus.

While Dekker had a phenomenal career at Sheboygan, the game that stands out in basketball fans' minds is the Wisconsin State Championship game during Dekker's senior year. With 13 seconds left and Sheboygan down 2, Dekker caught the ball a few feet in front of the baseline. He dribbled between his legs and past two Racine Lutheran defenders, taking a contested fadeaway three pointer over two defenders with two others lurking. Dekker buried it with 3 seconds remaining, giving Sheboygan the lead, 67-66, and ultimately, the victory for their first D5 State Championship. 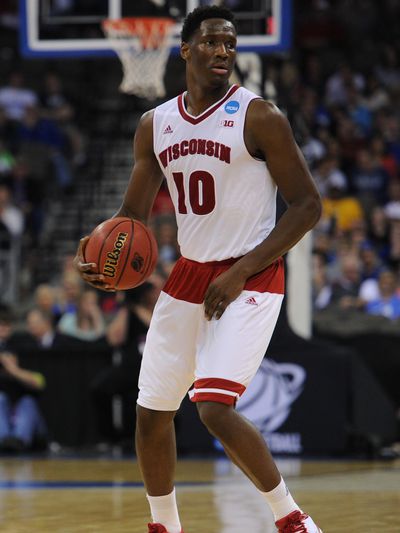 A look at the media narratives around the Big Ten's Final Four appearances.

What people forget, however, is the cockiness and confidence of Dekker, standing there with his right hand outstretched as soon as the shot goes up. He knew it was going in, never a doubt in his mind. As he runs back down the court, his hand still outstretched, he knows the game is over. Lutheran's half court attempt falls short, and Dekker is mobbed by his teammates. The camera focuses on Dekker after his massive game winner at, you guessed it, the Kohl Center where the Wisconsin Badgers play. Not a bad introduction for the folks in Madison.

While Dekker dominated at Sheboygan, the level of play in Wisconsin's D5 League is completely different than what he was about to see in the Big Ten. In his first year, he was a solid contributor for Bo Ryan, a man known for his military-like conduct of his teams and his reluctance to adapt to the tendencies of modern college basketball. Dekker had a career high 19 points against Nebraska, on a remarkably efficient 5-6 shooting including 4-5 on 3-pointers.

The Badgers ultimately fell victim to the annual 5 vs 12 seed NCAA Tournament upset at the hands of Ole Miss. Dekker was the only Badger to score in double figures, finishing with 14 points despite a horrid 2-10 night from 3-point range. Starters Jared Berggren, Ryan Evans and Mike Bruesewitz all graduated, leaving a spot in the starting lineup and a plethora of minutes available to Dekker and reserve Frank Kaminsky.

Dekker responded in a major way in his sophomore campaign, increasing his averages to 12 points and 6 rebounds while playing nearly 30 minutes a game. Dekker scored in double figures the first six games of the season, and the Badgers took this momentum to race out to a 16-0 start. After a great start to the season, Dekker found himself in a slump, averaging only 7.8 points in the final five regular season games.

Dekker had solid games through the first four NCAA Tournament games to help lead Wisconsin to their first Final Four under Bo Ryan, but had a truly breakout game against Kentucky. He finished with 15 points on 3-4 shooting, including 8-8 from the free throw line. Dekker was able to prove to himself and fans around the country that he could perform against the highest caliber of college players, despite the Badgers losing a heartbreaker in the Final Four by a final score of 74-73.

Over the summer, Dekker attended the LeBron James Skills Academy, a camp in which the best college players in the country showcase their skills and improve alongside current NBA players. Dekker dominated, and scouts argued that Dekker was the most impressive player at the camp. His development along with a late two inch growth spurt meant Dekker was now a 6'9 wing with guard skills, and playing alongside the bruising 6'8 Hayes and the lanky, but immensely talented 7'0 Kaminsky gave the Badgers one of the most formidable front lines in the entire country.

"What people forget, however, is the cockiness and confidence of Dekker, standing there with his right hand outstretched as soon as the shot goes up."

Wisconsin cruised through the first few weeks of the season, but dropped their most high profile home game of the year, a heartbreaker to fellow Final Four participant Duke. The most disconcerting part for Badger fans was Dekker's disappearance, as the junior only had 5 points on 2-5 shooting, while Kaminsky and Traevon Jackson shouldered the scoring load with 25 and 17 points respectively. As the season continued, there was concern that Dekker was fading, but he picked up his play in January and February, including a stretch of 10 consecutive games where Dekker scored in double figures and the Badgers went 9-1 (yes, they lost to Rutgers without Kaminsky and Jackson, but they responded right?)

Following a Big Ten regular season championship, Wisconsin cruised through the Big Ten Tournament's opening rounds before putting away a pesky Michigan State team in the championship game. Dekker, however, only scored 4 points on 2-7 shooting in 39 minutes against the Spartans. With the NCAA Tournament looming, Badger fans were hoping Dekker would be able to get out of his funk.

Dekker responded in a big way in the first weekend of the NCAA Tournament, scoring 20 points against Coastal Carolina and 17 on Oregon, propelling the Badgers to the Sweet Sixteen and a matchup with North Carolina. While Dekker was impressive in these games, what happened next was something no one saw coming.

Against North Carolina and its slew of talented wings, Dekker shredded the Tar Heels for 23 points and 10 rebounds. Roy Williams tried everything, throwing J.P. Tokoto, Brice Johnson and Justin Jackson at Dekker. Nothing worked, as Dekker shot 10-15 and committed no turnovers or fouls. Could Dekker possibly top this?

The Elite Eight rematch with Arizona, an extremely long and talented team with one of the country's best defenses beckoned, and Dekker delivered. In one of the most brash and arrogant performances this college basketball season, Sam Dekker was absolute money. He twirled his way in the lane, made smooth backdoor cuts off the ball for dunks and layups and drained 3s over the outstretched arms of the Wildcat players en route to a 27-point masterpiece. Dekker finished 8-11 overall, including a backbreaking 3-pointer with 20 seconds remaining. Saturday night, Sam Dekker was the best player on the floor, and he knew it.

While Dekker had a phenomenal performance, sidekick Frank Kaminsky bullied his way inside for 29 points. As good as Dekker and Kaminsky were on Saturday, they might have to repeat this level of production if the Badgers want to beat the vaunted Kentucky Wildcats. There's a reason the Wildcats are 38-0 and they could very well give Wisconsin its toughest challenge of the season.

Once you get past the bravado of John Calipari, the perfect 38-0 record and the slew of McDonald’s All Americans, you find a team that struggled with a very talented but pesky Notre Dame team on Saturday. Were it not for some late Kentucky heroics and Andrew Harrison free throws with 6 seconds left, Wisconsin could very well be playing Notre Dame. But there’s a reason the Wildcats are 38-0, with their ability to close out tight games as a fallback when they’re not blowing teams out by 30+ points.

Dekker will have his hands full Saturday night, and Kentucky can throw Trey Lyles, Willie Cauley-Stein, Marcus Leeand even the Harrison twins at Dekker to slow him down. However, Dekker's red hot shooting and athleticism will be a huge plus against Kentucky and their NBA size, as Notre Dame struggled to keep some of Kentucky's bigger bodies out of the paint.

Saturday night will be a chance to prove to America that he's truly one of the best players in the country. Dekker will have Kaminsky, Hayes, Dukan and even Bronson Koenig at his disposal to help slow down the Wildcats. If Dekker can take (and make) good shots and keep the crisp, free flowing Wisconsin offense in motion, the Badgers have a chance to make their own history.

As the lights get brighter, Dekker plays even better. A 6'7 boy from Sheboygan, Wisconsin transformed into a 6'9 chiseled man playing for one of the most talented teams in the entire country. Dekker will be given every opportunity to succeed in the NBA, as his size and shooting touch has caught the attention of GMs around the league. But Dekker isn't thinking about the next step; he's ready to bring home Wisconsin's first National Championship since 1941. Win or lose, Sam Dekker has already made the entire state and the small town of Sheboygan, Wisconsin incredibly proud to call him their own.