The Big Ten title race officially wrapped up on Sunday (or at least part of it), but there are still a lot of great games remaining in the final week of conference play as several teams fight for an NCAA Tournament berth, other teams fight for Big Ten Tournament seeding, and a few others try to end their season on a high note.  Wisconsin clinched at least a share of the Big Ten with its win over Michigan State, but Maryland still remains in play to grab a share.

The Badgers stayed at #1 this week after losing on the road to Maryland and clinching at least a share of the Big Ten title with a win over Michigan State.  Wisconsin is on the verge of an incredible stat in the BTP Power Rankings as they are just one week away from spending the entire regular season as the #1 team in the conference.  They finish with Minnesota and Ohio State on the road this week.

The Terrapins strengthened their hold on #2 after beating both Wisconsin and Michigan at home.  They were two solid wins that further helped Maryland contend for a #2 seed in the NCAA Tournament.  They close with Rutgers and Nebraska on the road this week. 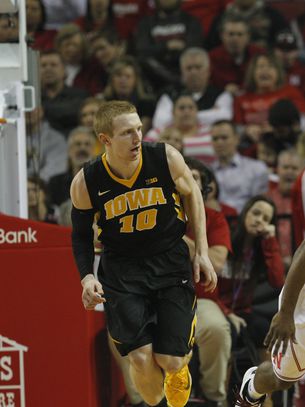 The Buckeyes moved up to #3 after knocking off home wins against Nebraska and Purdue this week.  Though Ohio State still has some work to do in the conference standings, they look poised to get a double-bye in Chicago.  They finish with Penn State on the road and Wisconsin at home this week.

The Boilermakers took a slight drop after splitting their games against Rutgers and Ohio State.  Still, Purdue is battling for an NCAA Tournament berth and will need every win they can get in the final week.  They get Michigan State on the road and Illinois at home in games that are starting to feel like must wins.

The Spartans took a decent drop after losing to Minnesota at home and Wisconsin on the road.  Though neither loss by itself is necessarily that bad, Michigan State really needed at least one win to secure their NCAA Tournament berth.  Now, they have an interesting final week with Purdue at home and Indiana on the road.  MSU still seems solid to make the big dance, but they need at least one win.

The Hawkeyes had a small rise this week after beating Illinois at home and avoiding an upset on the road against Penn State.  This team does not appear to be repeating the collapses that Iowa fans have seen in the last few years.  They get Indiana on the road and Northwestern at home this week with the potential to take a solid jump up in the conference standings with two wins.

The Hoosiers looked really solid before last week, but after dropping to Northwestern, things are getting a little stressful in Bloomington.  Indiana has lost 2 of its last 3 games and 6 of its last 10, but none might have been as bad as the loss to the Wildcats.  Now, they close with Iowa and Michigan State at home in two games with a lot on the line for all teams involved.

The Illini did not move this week after dropping on the road to Iowa and blasting Northwestern at home.  Illinois appears to be sitting right on the NCAA Tournament bubble with Nebraska at home and Purdue on the road this week.  The Illini really need two wins or risk going to Chicago with a lot to earn.

The Gophers won their only game last week with an upset on the road over Michigan State.  Minnesota has not had a great season overall, but has shown the ability to play with several good teams this year.  The Gophers will close with Wisconsin and Penn State at home and will look to secure an NIT bid.

The Wolverines have faced a great deal of adversity this season and although they continue to play tough against many teams, they have not shown the ability to beat good teams consistently.  They dropped their only game last week on the road to Maryland and have little to gain in their last two games with Northwestern on the road and Rutgers at home.

The Wildcats split their games last week with a home win over Indiana and a road loss to Illinois.  The final stretch of this season has showed a lot about Chris Collins and this Northwestern team.  They will fight for a CBI or NIT bid this week with Michigan at home and Iowa on the road.

The Huskers continue to look like a mess and got blasted in their only game last week on the road against Ohio State.  They finish the season with Illinois on the road and Maryland at home.

The Nittany Lions again came close to beating a good team, but fell at home to Iowa in their only game last week.  Penn State still try to get into the postseason with Ohio State at home and Minnesota on the road this week.

The Scarlet Knights have lost 12 games in a row and failed to win a single game in February.  They will look to avoid a 14 game losing streak to end conference play with Maryland at home and Michigan on the road this week.

Along with this, there will be detailed analysis on trends of the season including averaging ranking of each team during the course of the season.