With Illinois losing to Alabama on Tuesday night, the Big Ten is now out of all postseason tournaments besides the NCAA Tournament.

Share All sharing options for: Thoughts On The Big Ten's Performance In the 2015 NIT and CBI Bids

On Tuesday night, Illinois headed on the road to face Alabama in this year's NIT.  After getting down big in the 1st Half, the Illini could never recover and ultimately went down to the Crimson Tide to end their season.  It was a downright bad effort by Illinois and the team looked flat.  In a "do or die" situation, the Illini came up very small and now the program will look to next season to finally get things right.

The loss was certainly a bad one for the Illinois program, but it was also significant for the Big Ten.  Despite landing a nation's best 7 teams in the NCAA Tournament, the conference put just one team into the NIT and had multiple teams turn down CBI bids.  As a result, Illinois was the only Big Ten team in the "other" postseason tournaments.

With Illinois' early departure from postseason play, it seemed like a good time to take a step back and reflect on not only the performance of Illinois, but also the fact that the Big Ten could only get one NIT bid and the decisions of multiple Big Ten programs to turn down CBI bids.

But one note before I jump into these comments.  The Big Ten still had a good regular season.  No matter how much anyone claims or may like for the other tournaments to improve their significance, the NCAA Tournament rules all.  I have long been a believer in the concept that the NIT and CBI have significance, but a bid to the Big Dance is still worth more than even an NIT title.  It's just the nature of the game.

On Sunday night, when it was announced that the Big Ten only received one bid to the NIT, I have to admit I was surprised.  Nobody can honestly claim to know exactly who the NIT would opt to take, but considering that Michigan and Minnesota both appeared to have done enough to edge themselves in the field, it was a little jarring to see only one team make the cut.

Still, Illinois made it and entered as a #3 seed.  A bit disappointing considering that some had them as one of the very last teams out of the NCAA Tournament field, but it was still a solid seed and they would be favored in seeding for at least the first round.

What We Learned From: Illinois at Alabama 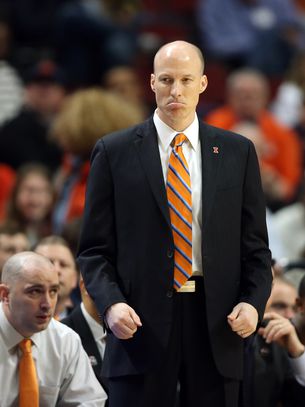 What did we learn from Alabama's win over Illinois on Tuesday?

Of course, with Illinois' exit, they went 0-1 in the NIT and the Big Ten is now officially done in the NIT.  Not all of this can be credited to Illinois, but the fact that neither Michigan nor Minnesota could sneak in was a much more significant blow.  Instead of the conference having 10 teams in the NCAA and NIT, they had just eight.  Plus, considering that Michigan played very well down the stretch and that Minnesota has been able to get up for some games, maybe you get one or even both of those teams into the 2nd Round.

A lot has been made of the fact that success in the NIT one year does not indicate success in the next, but it certainly indicates the depth of your league.  Plus, it's hard to imagine that winning games in the NIT somehow hurts a team.  Last year, the Big Ten was the nation's best conference and a big part of that was the fact that two of its middle teams (Illinois and Minnesota) were able to win a bunch of games in the NIT.  Minnesota won the championship and Illinois won its first game despite playing on the road.

The Big Ten had plenty of quality teams this year overall, but to be able to send teams that finished 8th, 9th, and 11th in the conference standings to the NIT would have been big and to have them win games there would have been even bigger.  Instead, the only thing the conference got out of its NIT appearance was its 8th place team going on the road and losing to an Alabama team that tied for 8th in the SEC.  Is that a huge blow to the league?  No, but it's certainly not the way the conference wanted to start the postseason.

The other postseason tournament that the Big Ten may have participated in was this year's CBI.  However, Michigan, Minnesota, Northwestern, and Penn State all rejected any potential bids and thus, no Big Ten teams ended up participating, which has led to some debate.

The biggest debate about the CBI is whether it makes sense for Power Five programs to participate.  There is the upside of playing in more games and having the potential to add to your win total, but there is also the downside of having to foot the bill for these games and the fact that there is not a whole lot to gain.  Penn State and Purdue both recently participated and both suffered embarrassing defeats while participating.  It can be worth it if you win out or at least go far enough to face another big name team, but if you lose early, it can be a huge hit to your program's reputation and potentially recruiting.

For me, I think it depends more on the circumstances of your team on whether to accept a bid, but unless your team really has not been to the postseason in quite some time or you think a few extra games really could help, it just does not make a lot of sense.  I think this is also reflected on the Big Ten as well.  Yeah, the conference could grab a few more wins and perhaps make some stats look nicer, but the significance here is even less than the NIT, which is already a huge step below the NCAA Tournament.  Essentially, it might be nice to say more teams made the postseason, but the significance of a run in the CBI certainly isn't that huge for a conference like the Big Ten.

There is no doubt that the Big Ten's postseason performance outside of the NCAA Tournament selections has been underwhelming so far.  Perhaps we will forget this if the Big Ten makes a big mark over the weekend, but instead of having potentially three teams making a significant impact in the NIT, the conference is out after just one game due to a bad loss.  Most have viewed this as a down year for the Big Ten and the start of the postseason has certainly not done much to change that.