Take a look at the history of the Illini in the NIT.

Last weekend, Illinois was knocked out of the Big Ten Tournament by Michigan and as a result, went into Selection Sunday with many doubts about making the NCAA Tournament.  As it turns out, Illinois' 19-13 overall record was not good enough to make the cut and the team found themselves heading to the NIT.  Illinois will be the only Big Ten team participating in this year's NIT and it will be the 6th appearance in program history.  The Illini are a combined 8-5 all-time in the NIT.

Before 1996, the Illini made just two appearances in the NIT and both came in the early 1980s.  In 1980, Illinois entered the NIT with a 16-12 overall record and came in having lost 4 of their final 6 games.  However, they had arguably their best run in the NIT in program history after beating Loyola (IL), Illinois State, and Murray State.  The first two games were relatively convincing wins for the Illini, but the win over Murray State was a tight battle.  Unfortunately, in the NIT semi-final, Illinois fell short against Minnesota, but they did win the 3rd place game against UNLV.

The Illini also made an appearance in the postseason NIT in 1982 after a 16-10 season.  They came into the postseason on a two game winning streak after beating Iowa and Northwestern and maintained that momentum with a dominating win over Long Island University.  However, a disappointing year for Illinois took another hit as they exited in their second game with a tight loss to Dayton. 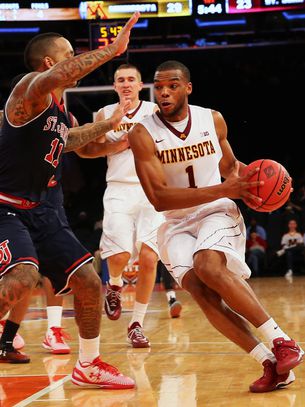 Following a hiatus from the NIT for 13 seasons, the Illini made another appearance in 1996 after finishing the regular season with an 18-12 record.  Illinois came in with little momentum after losing 3 of their final 4 games.  Unfortunately for the team, the season ended on a dud with a loss to Alabama in the first round.

The next appearance for Illinois in the NIT came in 2010 after going 18-13 in the regular season and 1-1 in the Big Ten Tournament with a win over Wisconsin and a loss to Ohio State.  Illinois got off to a hot start in the NIT with solid wins on the road against Stony Brook and against Kent State, but for the second time in program history, Illinois would end their season in the NIT against Dayton after a 6 point loss.

The final appearance for Illinois in the NIT before this year was just last season in 2014 after going 18-13 in the regular season and splitting their Big Ten Tournament games against Indiana and Michigan.  Unfortunately for Illinois, the team was unable to host home games due to arena renovations and instead was forced to play on the road.  They got past their first game against Boston University, but fell short on the road against Clemson.

This season, Illinois enters the postseason at 19-13 overall after coming off a devastating loss to Michigan in the Big Ten Tournament.  They will face the #6 seeded Alabama Crimson Tide and if they win, they will face either Miami (Fl) or NC Central.  Unfortunately for Illinois, they will be repeating some of the challenges of last season as due to renovations, they will be forced to go on the road to Alabama.  As a result, the Crimson Tide are considered solid favorites in the game and a potential return trip to Miami - the Illini lost on the road to Miami earlier this season - certainly does not look like an easy game either.

The key for Illinois to grab a win on Tuesday night will be guarding Alabama point guard Levi Randolph and big man Jimmie Taylor.  Randolph has an offensive rating of 121.4 this season and Taylor has a 16.6 rebounding rate and a 9.2 blocking rate.  The play of Nnanna Egwu will be vital to not only playing solid defense on Taylor, but also to get buckets inside and get around Taylor's solid defense.

This season certainly did not go the way Illinois fans hoped, but there is still the potential to end things on a positive note, build depth for next season, and beat at least one Power Five team on the road.