Michigan Wolverines With More Questions Than Answers Down the Stretch

The Wolverines dropped a pair of games this week at home to Iowa and at Indiana. With 6 conference games remaining, their NCAA tournament hopes look bleak.

Share All sharing options for: Michigan Wolverines With More Questions Than Answers Down the Stretch

Oh, Michigan. What a rollercoaster this season has provided for fans of the Maize and Blue. Just when fans were ready to throw in the towel without star Caris LeVert, the Wolverines continued to battle. No one gave these Wolverines a chance at home against Wisconsin, and they pushed one of the consensus top-5 teams in the country to overtime.

But like most college students, they've had their ups and downs. They were completely embarrassed against a very good Iowa team, as the Hawkeyes frontline of 6'9, 6'9 and 7'1 thrashed the Wolverines zone en route to a 72-54 victory on Thursday night. Many expected Michigan to roll over, as the team's postseason hopes remained in serious doubt.

That's not quite what happened Sunday afternoon in Bloomington. Michigan battled a very good Indiana team, and ultimately fell short, losing 70-67 after a missed 3-point attempt from Muhammad-Ali Abdur-Rahkman clanged off the rim at the buzzer. Michigan fought the entire game, including a heroic performance from marksman Zak Irvin. Irvin had been in a nasty, well-documented slump since LeVert and Walton's exit from the lineup (and arguably even before), but he was the star Sunday afternoon. Irvin finished with 23 points on 9-16 shooting in his return to his home state, but it wasn't enough to pull out the victory for Michigan. 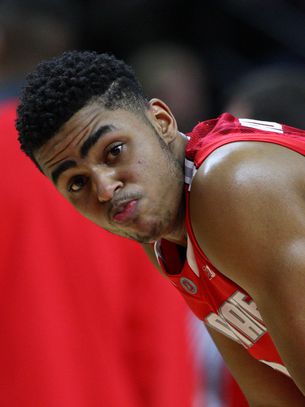 With 6 conference games remaining, Michigan sits at an unfamiliar 6-6 clip, 3 more losses than the team finished with in 18 conference games last season. While the team has dropped some heartbreakers, they still have numerous chances to stake their claim for the NCAA tournament.

While the Wolverines did drop the last two contests, there are many positive takeaways from their last two performances besides for Irvin. On Thursday, Aubrey Dawkins was the star. The freshman from Palo Alto had another phenomenal shooting night, finishing with 16 points on 5-8 shooting (4-7 from 3). Dawkins seems to be comfortable in catch-and-shoot opportunities, but needs to string together more consistent back-to-back nights for Michigan.

On Sunday, Michigan got major contributions from a few likely and unlikely players. Besides for Irvin, the most impressive performance was Ricky Doyle. Doyle was perfect from the floor, finishing with 16 points on 5-5 shooting and 5-6 from the foul line. Michigan needed its bigs to step up, especially against an Indiana frontline that starts at 6'7 "center". Doyle was up to the challenge, finishing at the rim with either hand and drawing fouls in 27 productive minutes of play. Doyle will get most of the accolades, but Mark Donnal had an extremely productive 10 minutes of play. He finished at the rim, stepped outside and knocked down a 3, and seemed to be the most confident I've seen him in about a month. Donnal could be huge for Michigan in 10-15 minutes a game down the stretch, and this performance should be a lift for his confidence.

The other bright spot was another Indiana kid, Spike Albrecht. The junior had a terrific afternoon, distributing 7 assists and finishing with 12 points on 3-5 shooting. Spike does not look 100%, but his movements are far more encouraging than what he was able to do a few weeks ago. Albrecht, like Irvin, played 39 minutes, and Michigan will need huge minutes from these two down the stretch especially if Derrick Walton, Jr. can't play.

Thursday night is an especially big test featuring two teams trending in opposite directions. While Michigan has dropped 3 straight and 4 of 5, Illinois has won 3 straight and 4 of 5. The Illini sit at 6-5 in conference, half a game better than Michigan, but also are 16-8 overall. They are extremely talented in the backcourt, with Malcolm Hill and Kendrick Nunn leading the way. Both players were instrumental in the Illini's win over Michigan State on Saturday, and have propelled Illinois over the last 3 games. They have two other excellent players that are uncertain to return Thursday night, as both Rayvonte Rice and Aaron Cosby are both questionable. Up front, Nnanna Egwu will be trouble for Michigan, as the Wolverines have had trouble guarding traditional big men all season.

It's tough to call Thursday night's game a must-win for Michigan, but it's the damn closest thing. Michigan will likely need to get to 11 conference wins to even have a spot on the bubble, and picking up a marquee win at Illinois would be huge. Michigan beat the Illini in the first conference game of the year, but played at home and had both Derrick Walton, Jr. and Caris LeVert. Illinois is a much-improved team since, and will be looking for revenge in Champaign. This is the type of victory that could help jumpstart Michigan (again) for a postseason push, but they will need Irvin, Spike and the supporting cast to have big games to win a very difficult contest.