A closer look at the controversial dead-ball technical foul yesterday during the Illinois and Michigan State game in East Lansing.

Share All sharing options for: Following Call In Illinois-Michigan State Game, Is It Time To Allow Monitor Common Fouls?

En route to a 59-54 win on Saturday, Illinois battled through some adversity, most notably, a controversial call that could have changed the outcome of the game. Late in the second half, the Fighting Illini had a 55-52 lead, and Travis Trice for Michigan State was on the free throw line shooting 1-1. Trice made his first free throw, but everyone seemed to be looking around after the ball went in, and Trice and company were complaining to the refs that he had been fouled.

Unsure as to what had happened, the refs decided to go to the monitor to see if they saw any excessive contact that needed to be called. Upon further review, Jaylon Tate had used his hips to bump Trice backwards while boxing out Trice's free throw attempt. Whether or not the contact was excessive or uncalled for is a matter of opinion, but the refs had a difficult decision to make.

Since none of the refs actually called a foul on the play, they couldn't call a common foul after the fact. Upon going to the monitor, the refs had the choice of either walking away and letting them play on, or calling a severe foul: a flagrant or a technical. As it seemed like there was enough contact where a common foul was probably needed, there didn't look to be enough to call a flagrant foul on Jaylon Tate.

What We Learned: Illinois at MSU 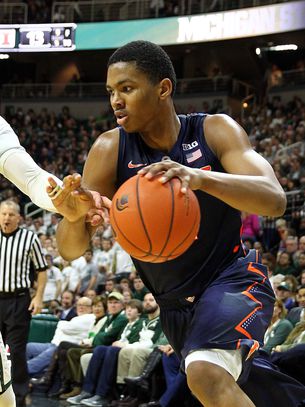 What should fans takeaway from Illinois' win in East Lansing?

A flagrant foul is defined by the NCAA as a "personal foul [that] involves excessive or severe contact during a live ball." There were a few problems with this. The contact made by Jaylon Tate was certainly not severe, it was more or less just enough to knock Trice back and make him stumble a little. On the other hand, the contact made was technically not initiated during a live ball scenario. The ball had apparently gone through the hoop before Tate made contact with Trice, and the officials apparently thought that contact was excessive enough to rule a dead-ball technical foul. Trice was allowed to finish the back end of his 1-1, the Spartans got an additional 2 free throws, and they were allowed to keep the ball.

After the game, head official Terry Wymer released a statement regarding the rationale behind the call.  He said that Tate was called for "contacting an opponent while the ball is dead in an unnecessary, unacceptable and excessive manner," and that "the ball went through the hoop, the ball became dead, [and] No. 1, Tate, backed into him in an unnecessary manner and made contact with him at that point" (Charboneau). Possibly the most crucial aspect of the call had to do with where the contact was actually initiated. Terry Wymer said "It wasn't a basketball play. It was excessive. And where he hit him, in an excessive area. Right in the groin." (Charboneau).

Though John Groce and company were flabbergasted by the call, Wymer and the officials did have a good rationale behind their ruling. But many college basketball enthusiasts and Illinois fans are frustrated by the nature of calls like these across the NCAA. Though contact was excessive and Tate should have penalized for initiating it, a technical foul seems somewhat severe in a late game scenario like the one we saw yesterday. It can be argued that a play made completely away from the ball should not have such a punitive effect on a team, especially during the last few minutes of the game. The referees certainly weren't just "letting these two teams play" on Saturday as 34 total fouls were called throughout the game, including 11 on the Fighting Illini in the first half alone.

This is not necessarily the type of basketball game either side wants to see. Although fouls need to be called, there also needs to be a smooth flow to the game that most, if not all, viewers enjoy watching. But this call also sheds some light on the need for some improvements in the way referees officiate.

"It was excessive. And where he hit him, in an excessive area. Right in the groin."-Terry Wymer (Official)

Back in the 2013 NCAA Tournament, a disappointing call for Illini fans in the Round of 32 sent them packing, but also changed the way college basketball is officiated. After it seemed almost glaringly obvious that Kenny Kadji of the #2 seed Miami Hurricanes knocked the ball out of bounds under Illinois' basket late in a close game, the ball was rewarded to the Hurricanes who would advance to the Sweet 16. As a result of this game, refs were given the ability to go to the monitor with under 2 minutes left in a game to review out-of-bounds calls. This new implementation has worked very well and has eliminated the ability of bad out-of-bounds calls to ruin a college basketball game.

But after this game in East Lansing, it seems that the officials could make college basketball even better by allowing monitor rulings for common fouls. Since the officials couldn't call a common foul, even after going to the monitor for a second look, they were forced to call a technical foul and punish Illinois a little bit more than they should have been punished.

A bump initiated by Jaylon Tate led to an additional two free throws and the ball for Michigan State during a tight game, though, they would go on to miss two of their next three and lose the game. If officials were able to go to the monitor and call a common foul after a closer look, then it might make late game situations a little bit more fair for both sides, because there was no easy call to make, and whether it was ruled incidental and a play-on or a technical foul, the call wouldn't have been fair.