The Big Ten is coming off arguably its best week of the season. The conference scored plenty of noteworthy wins and was able to come out on top in the 2015 Big Ten-ACC Challenge. All told, it's been seven seasons since the Big Ten lost the event and the conference's performance has gone a long way toward overcoming some of the early season struggles for teams like Illinois, Ohio State, and Wisconsin this year.

The Spartans only had two games last week and were able to grab two wins. On Wednesday, Michigan State topped a really good Louisville team in the Big Ten-ACC Challenge and on Saturday, the team destroyed Binghamton at home. For a team trying to show it belongs at the top of the national rankings, the performance didn't leave much doubt.

Overall, Michigan State received 85 percent of the first place votes this week. Considering that Michigan State is in position to be ranked No. 1 this week, it's hard to see the Spartans dropping without a shocking loss. This week, the Spartans will face Maryland Eastern Shore and Florida at home in an effort to improve to 11-0 overall.

The Boilermakers had arguably the best week of any team in the Big Ten. On Tuesday, Purdue went on the road and scored a huge win over a solid Pittsburgh team and on Saturday, Purdue scored a win over a dangerous New Mexico team at home. With the wins, Purdue moved to 8-0 on the year. Though Purdue did have some more difficult games this week, the closest margin of victory for the Boilermakers all year is still 12 points.

Overall, Purdue received 15 percent of the first place votes. The good news for the Boilermakers is that with IUPUI, Howard, and Youngstown State at home this week, improving to 11-0 is pretty likely. Purdue will probably need some help to move up to No. 1 in these rankings, but it's not impossible with a good week.

The Terps did have the team's first loss this week on the road to a very good North Carolina, but was still able to grab a nice victory over St. Francis PA on Friday. Though it wasn't the best week for Maryland, it really did show that the team can go on the road and play with teams like North Carolina and take care of business during a home game.

Overall, this was the first week that the Terps did not receive a first place vote. Now, Maryland will get a tough Connecticut team on a neutral court on Tuesday and Maryland Eastern Shore at home on Saturday. With two wins, the Terps would have a great shot to move back up in these rankings.

The Hawkeyes had a few scary moments this week, but were still able to go 2-0 in the team's games against Florida State and UMKC at home. Of course, the game against Florida State was a thriller on Wednesday night and actually ended up deciding the Big Ten-ACC Challenge as Iowa pulled out the win in overtime.

Overall, Iowa is now sitting at 6-2 with wins over three teams in the top 100 on KenPom, including two away from home. The Hawkeyes will get a challenging slate this week with Western Illinois at home and a road game at in-state rival Iowa State.

The Wolverines might finally be starting to come around following a solid performance this week. Michigan was able to go on the road and score a win over North Carolina State and follow it up with a home win over Houston Baptist at home. Neither win was exceptional, but the team is playing well. Now, Michigan will have to go on the road and play SMU on Tuesday and Delaware State at home on Saturday. If the Wolverines can find a way to beat SMU, there's no doubt that Michigan will find itself higher in these rankings next week.

The Badgers easily had the team's best performance of the season this week. All told, Wisconsin went on the road and beat a tough Syracuse team in overtime and followed that up by crushing a decent Temple team at home. Despite the rough start to the year, Wisconsin sits at 6-3 on the year with three top 100 KenPom wins. Now, the Badgers will get respectable Milwaukee and Marquette teams at home this week. If Wisconsin can win both games, it's safe to say that those early season struggles would start to be in the rearview mirror.

The Hoosiers had a mixed week with a blowout loss to Duke on Wednesday and a blowout win over a respectable Morehead State team at home. Many were wondering whether Indiana could make a serious run at the top of the Big Ten and in the national polls, but after it's performance against the Blue Devils, there isn't much doubt that Indiana is still at least a step behind. Indiana gets IPFW and McNeese State at home this week.

The Wildcats had another solid week with a road win over Virginia Tech in overtime and an easy win over SIU Edwardsville at home on Saturday. With the two wins, Northwestern is quietly sitting at 7-1 on the season and should be favored in the team's next five games. It will just be about playing consistent. This week, Northwestern will have two home games against Chicago State and Mississippi Valley State with a solid chance to move to 9-1.

The Huskers continued the "season of almost" last week with a narrow loss to a very good Miami (Fl) team at home in overtime and a win over Abilene Christiana on Saturday. Nebraska has taken care of all its weaker opponents and a decent Tennessee team, but has failed to close the deal against very good Cincinnati and Miami (Fl) teams. This week, Nebraska has a tough challenge with Creighton on the road and Rhode Island at home. If Nebraska can even find a way to split, it would help their postseason goals tremendously.

The Buckeyes actually had a solid performance despite only going 1-1 on the week. Ohio State started with a loss to a very good Virginia team at home and followed it up with an easy win over VMI. Losing is certainly never good and it's hard to view Ohio State as a serious Big Ten contender at this point, but in the team's game against Virginia, the Buckeyes finally played quality basketball and really looked dangerous. If the team can capture that going forward, Ohio State could beat a lot of solid teams.

Dive Deep Into The 2015 B1G/ACC Challenge 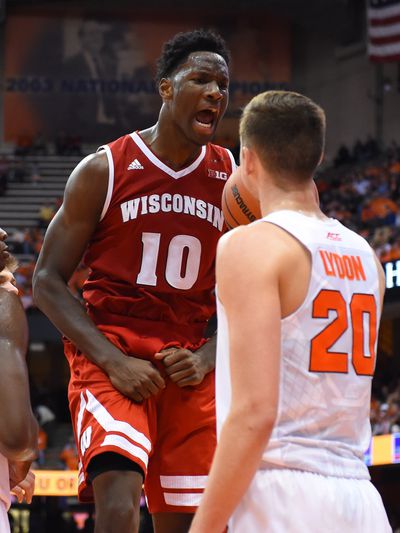 Ohio State now sits at 3-4 overall and will get Air Force at home on Tuesday and Connecticut on the road next Saturday. It's going to be another challenging week, but another chance to score a major win.

The Illini followed up last week's so-so performance with another so-so performance. Illinois had a chance to beat a good Notre Dame team at home on Wednesday and let it slip away and then beat Western Carolina at home on Saturday. Again, not a horrible week by any means, but given that Illinois is now just 4-5 overall, it's tough to spin it too positively. Illinois gets Yale at home and Illinois Chicago on a neutral court this week.

The Nittany Lions have quietly been scoring wins the last few weeks and though it hasn't always been pretty, Penn State now sits at 5-2 on the year. Penn State is still a good bit away from being considered a quality team, it could be getting itself in line for an NIT bid if all goes right. Penn State gets George Washington on the road and Canisius and Louisiana Monroe at home this week.

The Gophers have been playing with fire the last few weeks and it finally burned the team this week. After scoring a win over a solid Clemson team on Monday, Minnesota failed to show up on Saturday and blew a game against a South Dakota team ranked outside the top 200 on KenPom at home. It was a massive blow to the team's resume and might have erased what Minnesota earned with the win on Monday. This week, the Gophers will get a challenging South Dakota State team at home and Oklahoma State on a neutral court.

The Scarlet Knights had two big non-conference games at home this week and came up short in both. With the two losses, Rutgers now sits at just 3-5 overall. Rutgers is actually just a few shots away from being 5-3 instead of 3-5, but for a team in desperate need of wins, it's been a disappointing start to the year. Now, Rutgers will get Central Connecticut at home and George Washington on the road this week.

(Editor's Note: Minnesota was mistakenly listed above Penn State at No. 12 in an earlier version of this article.)