The last week has been a complete mix of success and failure for the Big Ten. While the conference recorded wins over numerous major teams including Kentucky, Notre Dame, and Northeastern, other teams from the conference suffered losses to teams like Samford at home. The only top team to go down was Purdue and the Boilermakers lost to a quality Butler team, so it was far from a terrible week, but was still mixed nonetheless.

The Spartans only had one game this week and though it wasn't against a major opponent, it was a road game against a tricky Northeastern team. The Huskies are a fringe top 100 team on KenPom and already recorded wins over Harvard, Miami (Fl), and Stony Brook so far this season. It was a game that Michigan State should win, but not a gimme. Of course, Michigan State did grab the win and is now 12-0 overall.

Overall, Michigan State received 95.6 percent of the first place votes this week. This should come as no surprise as the Spartans are now the only team in the Big Ten that is undefeated and is receiving the vast majority of No. 1 votes in the national polls.

The Terps had one game this week and it was on a neutral site game against a respectable Princeton team. Maryland would be a solid favorite heading into the game and was able to get an 82-61 win when all was said and done. Now, the Terps sit at 10-1 overall with three top 100 KenPom wins and four top 150 KenPom wins.

The Boilermakers also had just one game this week and it was the showdown on Saturday in the Crossroads Classic with Butler. It's a great event, but wasn't so great for Purdue, as the Boilermakers suffered the team's first loss of the season. The guard play was downright bad and Purdue ended up turning the ball over 18 times in the game. It's still be a great start for Purdue as the team sits at 11-1 overall, but it was undoubtedly a tough loss.

After receiving 19 percent of the first place votes last week, Purdue received no first place votes this week and dropped a spot. The good news is that with Vanderbilt on the slate this week, the Boilermakers will have a great opportunity to earn its way back up the rankings.

The Hawkeyes had just one game this week and it was a neutral site matchup against Drake. Iowa was a pretty significant favorite heading into the game, but things wouldn't be quite so easy. In fact, Iowa had to battle for much of the game and only came out with a 70-64 victory.

Nonetheless, Iowa now sits at 8-3 overall and has a pretty solid resume as it prepares to close out non-conference play this week. The Hawkeyes get Tennessee Tech on Tuesday in a game that would setup Iowa for a home showdown with Michigan State the following week.

The Hoosiers finally got the win that the team has been fighting for all season on Saturday as Indiana led an impressive comeback to beat Notre Dame on a neutral court. It was the team's only game this week and now pushes Indiana to 9-3 overall with just one more non-conference game remaining against Kennesaw State on Tuesday. With a relatively manageable slate awaiting, winning that game over Notre Dame could set the Hoosiers up to make quite a run through December and January if things go right.

The Wolverines continued the team's path through an underwhelming section of its schedule. This week, Michigan scored wins over Northern Kentucky and Youngstown State and dominated both teams in the process. There's one more non-conference game left for Michigan against Bryant before the Wolverines move into two winnable opening Big Ten games against Illinois and Penn State.

The Wildcats faced Mississippi Valley State and DePaul this week and were able to come away with two wins to propel Northwestern to 10-1 overall. Though Northwestern continues to play a relatively soft schedule, a road win over DePaul does add something to the resume and if the team can beat Sacred Heart and Loyola (MD) this week, Northwestern could enter Big Ten play with just one loss and might even be ranked. There's no doubt that the Wildcats will need to play well in Big Ten play to make its goals a reality, but it's been a solid start so far.

The Buckeyes undoubtedly had the team's best week of the season. Things started with an ugly win over Northern Illinois on Wednesday, but finished with a thrilling win over Kentucky on a neutral court on Saturday. Though it's hard to rationalize how a team that lost to Louisiana Tech and UT Arlington was able to take down Kentucky, that's exactly what happened and now the Buckeyes are sitting a lot better than just a week earlier.

Overall, Ohio State now sits at 6-5 and though the resume is far from great, the team has actually only lost to one team outside the top 100 on KenPom in Louisiana Tech. The Buckeyes get Mercer and South Carolina State at home this week and with two wins, could start to put together a decent resume.

The Badgers only had one game this week and beat Texas A&M Corpus Christian. Nonetheless, the main action happened off the court as head coach Bo Ryan opted to retire and Greg Gard took over as interim head coach. Though speculating as to how the change will impact the team is difficult, a game against Green Bay this week should help provide a clearer picture. Wisconsin needs to start winning to have any hope of the NCAA Tournament and perhaps Gard can get things turned around in Madison.

The Nittany Lions were able to notch a road win against Drexel this week in the team's only game. Penn State really hasn't looked great all year, but the team now finds itself at 8-3 overall with a neutral game against a solid Colorado team on a neutral court on Tuesday. 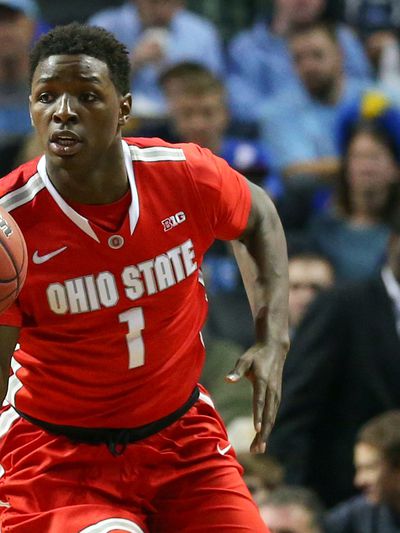 BTPowerhouse breaks down the 2015-16 Big Ten Player of the Year race.

If Penn State can find a way to win, perhaps the team can start putting together a resume for a potential NIT run. After all, 8-3 isn't the best record, but it is good enough to start a discussion.

The Illini continued the team's upward trend this week with a relatively easy win over South Dakota at home on Saturday. Illinois still doesn't have a great resume and is still trying to get healthy, but the team is quietly on a four game winning streak and has pushed its record to 7-5 overall. This week, Illinois gets Missouri on a neutral court in another game the team needs to find a way to win.

The Huskers were supposed to have an uneventful week. Unfortunately, that's no how things turned out. Last week, I wrote that Nebraska had the potential to enter Big Ten play without a bad loss if it could take care of business against Samford. Well, the Huskers didn't take care of business and went down 69-58 to the Bulldogs at home. Now, Nebraska sits at 7-5 and suffered a huge hit to its resume. The team will get Prairie View A&M at home on Tuesday in what is an absolute must win for the team.

The Gophers only had one game this week and grabbed a home win over Chicago State on Wednesday. Minnesota is now 6-5 overall and will have a challenging game against Milwaukee this week in a must win type of scenario. It's too early to write Minnesota off completely, but if this team is going to make some real noise, scoring a win this week has to be the first step.

The Scarlet Knights actually played better than some assumed this week, but still lost 73-67 at home to Monmouth on Sunday. With the loss, Rutgers now sits at 4-7 overall and is now projected to finish the regular season at 8-23 overall according to KenPom. This week, Rutgers faces Fairleigh Dickinson at home on Wednesday.