Trouble In Paradise: Indiana Hoosiers Fall In First Round Of Maui Invitational

The Hoosiers blew a late 9-point lead to Wake Forest in Monday's opening round of the Maui Invitational with old issues re-emerging.

Share All sharing options for: Trouble In Paradise: Indiana Hoosiers Fall In First Round Of Maui Invitational

Through the first week and a half of college basketball, It appeared that there was some substance to the expectations that the Indiana Hoosiers were a top-2 team in the Big Ten. With the Maryland Terrapins looking shaky in their early games, the Hoosiers joined the Michigan State Spartans and the Purdue Boilermakers as the more complete teams in the conference in the early season.

But, oh how quickly the mood can change in Bloomington, Indiana when it comes to Hoosier Nation's precision basketball team. A Wake Forest Demon Deacons comeback to give Indiana an 82-78 loss in the Maui Jim Maui Invitational, and entering 'Tom Crean' into the Twitter search bar has now become a nightmare or comedic gold, depending on the eyes of the beholder.

Look, we knew there was a loss or two looming on the IU schedule over the next ten days. But not to Wake Forest. Not to a team that won just 13 games a season ago. Not the exact team that struggled against college basketball doormat UMBC and lost to Richmond just four days prior. The Hoosiers were double-digit favorites for crying out loud. 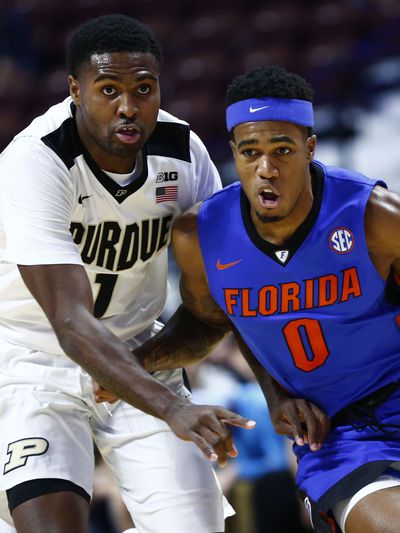 BTP looks at some of the biggest takeaways of the first week of Big Ten play.

The biggest question for the Hoosiers entering this season was how much, if any, could the defense improve from a season ago. Monday certainly was not a promising indication. The Demon Deacons were able to get the ball to the paint and finish early and often dropping 52 of their 82 points in the lane. Kanstantinos Mitoglou was allowed to go off in the first half, scoring 18 points on 8-9 shooting in the first 20 minutes. Fellow big man Devin Thomas picked up where Mitoglou left off, scoring 13 in the 2nd half as part of his game-high 21 points. IU freshman Thomas Bryant suffered the worst shooting performance of his short career with a 2-5 afternoon, and 4-7 from the line to finish with eight.

A 72-63 Indiana lead with just over seven minutes left in the game evaporated as we saw what can happen to this Hoosier squad when their shooting cools off, (and let's be honest, as much as I hate this cliche, their shooting in the first three games were video game-level ridiculous). Indiana went 2-7 down the stretch, 0-3 from beyond the arc, and 2-5 from the free throw line.

Once again, James Blackmon Jr.'s struggles away from Assembly Hall continued into the new season, scoring just 5 points on 1-8 shooting, including 1-6 from outside. Yogi Ferrell had flirted twice with ending his consecutive games with a 3-pointer made, and Monday was finally the end to his IU record of a streak, going 0-3 from deep in a 4-11 shooting effort good for 11 points.

Finally, we come to Tom Crean, who has been scrutinized in recent years for his time and late-game management. Many of the Hoosier fanbase have been quick to jump on the "Crean was out-coached" bandwagon when Indiana has suffered big or baffling losses. Unfortunately for Crean, those on the bandwagon won't have reason to get off any time soon following Monday.

With just over 3 seconds left on the clock and two timeouts, Crean spent his final two timeouts. The result; the decision to have Collin Hartman throw a three-quarter-court pass, rather than use one of the multiple speedy guards run the ball up the floor, (Also to note here, Indiana didn't even have a bailout player in the backcourt if the long pass wasn't there, which it wasn't, nor did any of the four possible receivers make a move over the halfcourt line back towards Hartman).

Now, no real good can come from the Maui Invitational for Indiana. Tuesday will pit the Hoosiers against a woeful St. John's Red Storm squad, and Wednesday will likely see a match-up with the UNLV Rebels. Imagine the hell-storm for Tom Crean and company if the Hoosiers don't finish the tournament at 2-1. The only real silver lining will be to see how quickly this Indiana team can bounce back from a loss.