With the college basketball season now more than a week old, BTPowerhouse returns with its second set of Big Ten power rankings for the 2015-16 regular season. The conference had a mixed week with some teams like Michigan State and Purdue scoring major wins and other teams like Ohio State suffering major upsets.

The Spartans scored the biggest win of any Big Ten team this season on Tuesday with an impressive win over the Kansas Jayhawks in the Champions Classic. Overall, Michigan State is now 3-0 and though the two of Michigan State's opponents have been against significantly overmatched opponents, the Spartans really have never struggled.

In total, the Spartans got 24 of 29 first place votes in this week's poll and it seems like many of the voters are going with the proven commodity in Michigan State over teams like Indiana and Purdue with more questions. The leader so far for Michigan State has been Denzel Valentine who has been nearly getting a triple double in each game. The Spartans will get Eastern Michigan on Monday then head out west and face Boston College in the Wooden Legacy.

The Terps lost hold on the top spot this week despite reeling off wins over Georgetown and Rider at home. Maryland is actually still undefeated at 3-0, but has not looked the part of preseason Big Ten favorite. The team has been inconsistent, the frontcourt has been hit or miss, and even some of the stars like Jake Layman have had off nights.

In total, Maryland accounted for just 4 of 29 of this week's first place votes. The good news for the Terps is that the team will be heading to Cancun, Mexico this week for the chance to score wins over a respectable Illinois State team and either Rhode Island or TCU in the next game.

The Boilermakers moved up a spot this week after three more dominant wins over Incarnate Word, Old Dominion, and Florida. The closest margin of victory yet for Purdue has been a 15 point win over Florida on a neutral court. Plus, it still seems like Purdue is working to find its stride.

This was the first week that Purdue received a number one vote and appears to be trending up. Purdue only gets one game this week on Saturday against Lehigh, but looks in good shape to continue the team's rise, especially with a matchup with Pittsburgh on the road next week.

The Hoosiers moved down a spot despite winning both of the team's games last week. Included in those two games was a complete dismantling of Creighton on Thursday night in what appeared to be a somewhat interesting game on paper. Creighton never stood a chance and got blown off the court.

This week, Indiana will head to Maui with what should be several interesting games on the slate. If the Hoosiers can play well, it seems pretty unlikely that the team won't start to trend up further in these rankings. The action will start on Monday with a matchup against Wake Forest.

The Hawkeyes still have some question marks about the team, but after scoring a blowout victory over Marquette on the road last week, the team moves up to No. 5 in the rankings. Iowa dominated Marquette and the game was never really competitive. This week, Iowa will be playing in the Advocare Invitational with a chance to score wins over Dayton and either Notre Dame or Monmouth.

The Wolverines slid a spot this week after splitting the team's home games against Elon and Xavier. Though the loss to Xavier wasn't horrible, it was a disappointing one for a team ranked in the top 25. Michigan will now get a trip to the Bahamas to try and get back on track. During the trip, the Wolverines will be facing Connecticut on Wednesday in what almost feels like a must win for Michigan.

The Badgers moved up two spots this week and it's finally starting to look like the team is getting back on track. On Tuesday, Wisconsin scored a win over North Dakota and then split its games against Georgetown and VCU over the weekend in the 2K Classic. Now, the Badgers will get two more chances to continue to trend up with Prairie View A&M on Wednesday and a road game against Oklahoma on Sunday.

The Wildcats were the first team in this week's rankings to remain steadfast. Northwestern had one of those weeks that looks fine on paper, but was pretty underwhelming in reality. The team won both its games, but had a narrow win over Fairfield and an overtime win over Columbia. The good news is that fans will get a better idea of what this team brings on Monday against North Carolina.

The Buckeyes moved down significantly this week after suffering a monumental upset at home against UT Arlington. It was a rough loss for a program that had avoided losses of this kind and will put a lot of pressure on Ohio State to take care of business going forward. Ohio State will now get two more challenging games this week against Louisiana Tech on Tuesday and Memphis on Friday.

The Gophers stayed at No. 10 despite going 1-2 last week. The team lost winnable games against Temple and Texas Tech, but was able to score a victory over Missouri State. For a team trying to get back to the NIT and that had fringe hopes for the NCAA Tournament, these are the kind of wins the team needs to get.

Is Iowa For Real? 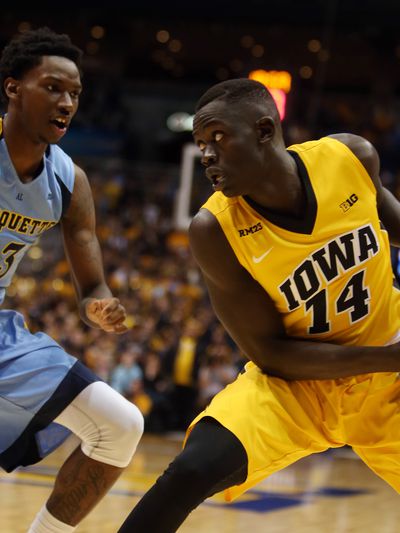 It was a frustrating week simply because the Gophers really did have a chance to turn the page and score at least one win against a team that would have helped Minnesota's resume. Minnesota will have one game this week at home against Nebraska Omaha on Friday in what looks to be an uncompetitive game on paper.

The Huskers had a pretty unusual week in teams of scheduling as the team faced a national power on the road in Villanova and then two very underwhelming Delaware State and Southeastern Louisiana teams at home. As one might have guessed, Nebraska went 2-1 with the loss coming to Villanova. Nebraska will have Arkansas Pine Bluff on Tuesday and a tough matchup with Cincinnati on Friday.

The Nittany Lions did move up a spot this week, despite receiving three last place votes in this week's poll. It was a mixed week as Penn State scored a win over DePaul at home in the Gavitt Games and then dropped a road game against Duquesne that was pretty uncompetitive, despite looking like it would be a good game on paper. This week, Penn State gets Radford and Bucknell at home.

The Illini continue to struggle and have now slid all the way to No. 13 and received five last place votes in this week's power rankings. Illinois is 1-3 on the season with two losses at home* to teams outside the top 100 on KenPom and one on the road to a solid, but not great Providence team. The Illini will get Chicago State at home then UAB in the Emerald Coast Classic. The pressure is rising in Champaign.

The Scarlet Knights are 3-1 on the year and a few blown late plays away from being 4-0. However, it's been a pretty rough start for a Rutgers team that has looked pretty rough in all of the team's wins and losses so far. Rutgers received 24 last place votes this week, but will have a chance to change that with matchups against Creighton and either Clemon or UMass in the Men Who Speak Up Main Event this week.