Why The Michigan Wolverines And College Basketball Matter To Me

As a senior reflecting back on the first three years of my college career, the beginning of Michigan's 2015-16 season starts the beginning of a farewell to the university that's made me who I am today.

Share All sharing options for: Why The Michigan Wolverines And College Basketball Matter To Me

Every September, just after the freshman arrive and just before classes start, Michigan football begins. A moderately quiet Ann Arbor turns into one of the most frenetic, exciting and spirited places in the entire country. My first memorable Michigan experience was the first football Saturday of my freshman year against Alabama.

With an 8 PM start, there was seemingly unlimited time during the day to tailgate. I began walking up Hill Street around 3:30, not really knowing what Hill Street even was. We saw students standing on roofs and porches, even filling the entirety of the front and back yards. Movies love to joke about an over-exaggerated version of college, but this was extremely real, right before my eyes.

This was Michigan, in all its glory of students clad in maize and blue, drinking beer and dancing like lunatics on a beautiful, Saturday afternoon. Normally it takes a while to truly verify that you made the right decision, but this was my confirmation.

The football team had a disappointing year, but I was more excited for basketball. I had always been a huge college basketball fan, with some of my favorite childhood sports memories rooting for West Virginia, a run-and-gun team led by the disciples of current Michigan coach John Beilein.

Beilein led some amazing West Virginia teams, using shooting and high IQ players to make up for their lack of talent and athleticism. This Beilein team made me fall in love with college basketball, and I hoped that Beilein's teams at Michigan would give me these feelings all over again.

That first year, the fairy tale came to life. Michigan far exceeded expectations, with Trey Burke's magical shot catapulting the Wolverines from a near-Sweet 16 exit to a national championship appearance. For Michigan's first Final Four appearance since 1993, we had to do something special. We knew we had to get to Atlanta somehow, but the cost of tickets and airfare seemed like an extremely steep cost with less than a week before the game.

On Monday that week, I received the greatest sentence in an email I have, and most likely will, ever get. It read:

As a Michigan Basketball Student Season Ticket Holder who attended eleven (11) or more home games this season, you have priority access to purchase one NCAA Tournament Final Four ticket.

Instead of if I should go, the question became when and how. My friend and I looked into flights and found a 10:15 AM flight out of Dayton, Ohio.

Like a foolish college kid, I figured I might as well go out the night before and got into bed at 2:30. Less than 3 hours later, my 5:15 alarm went off. We hopped in the car, and boarded the plane to Atlanta. 35 degree Michigan weather soon changed to a beautiful 70 and sunny in Atlanta, and we made it.

At the end of winter break earlier that year, my dad asked me if he should book a hotel room in Atlanta in case Michigan made it. I told him he was crazy, borderline insane, but he figured it was a good precautionary measure just in case. While all the other crazy Michigan fans that headed south didn't have anywhere to stay, 3 of my friends and I, coincidentally all from Deerfield, Illinois, were good to go. We got to the hotel room, changed and headed out to join the Final Four festivities.

While most people would have worn a t-shirt or jersey walking through the streets of Atlanta, I figured the most appropriate outfit was my overalls. I've worn these overalls to every home Michigan football game, and they've become ingrained in my mind as a Michigan staple.

"We didn't fully realize the magnitude of it because we weren't supposed to. Naïve, young and blissfully ignorant is probably the most accurate description of my freshman year."

The next 12 hours went by too fast, but they were some of the greatest of my entire life. We entered the Georgia Dome, had to wait for the first semifinal to end, and then rushed down to the student section to claim our space. There were chairs lined up to help keep everyone orderly, but they proved useless. We filled the front of the section and aisles, yelling and screaming, bonding over our basketball team and our school.

There was Eric, my friend from Connecticut who I had met in my dorm. While we didn't make the trip together, we had to stand together, as our signature high-five and dance for Nik Stauskas' 3-pointer made its way from Ann Arbor to Atlanta. And Megan, an extremely knowledgeable basketball fan from the suburbs of Chicago who probably knew more than I did. And Erica, perhaps most importantly, who told me about this tall, lanky baby-faced kid named Caris LeVert who was in her sports management class, who was now out there making 3-pointers and playing in the most important game of his life.

Caris, Spike Albrecht, Stauskas, Glenn Robinson III and Mitch McGary, like us, were freshmen. We didn't fully realize the magnitude of it because we weren't supposed to. Naïve, young and blissfully ignorant is probably the most accurate description of my freshman year, but this basketball team encapsulated it perfectly. If you don't realize how good something is and just go along for the ride, it makes it even sweeter at the end.

After an ugly performance from both teams and a clutch Jordan Morgan dunk to seal the game, Michigan was in the championship game. We jumped up and down, sang "Hail to the Victors", and partied the night away in Atlanta, still dressed in our overalls 12 hours later.

Those who follow Michigan basketball know how the season ended. In one of the best games of the year, Michigan narrowly lost to Louisville, one of the top four seeds, in an absolute heartbreaker. I laid on the floor for 15 minutes once it ended, stunned but also emotionally drained. This team had come so close to reaching the pinnacle, and they just felt short of their goal.

It didn't fully hit me until the next night, but a wave of emotion barreled into me. I sat in my room, thinking about the season, the team, and my freshman year. In the blink of an eye, early April was here. We had three weeks left of school, and the thing that got me through the harsh, cold winter was gone.

So I cried. Tears slowly crept down my face, and it felt justified. I had never fallen in love with a team the way that this Michigan team wrestled with my emotions for the last 6 months. It was something about the players; the swagger they brought to the court, the way they could get the fans involved, and the fact that five of the most important players on the team were freshmen.

Why does any of this matter? Michigan's athletes participate at the Division I level, the highest level of college athletics. But fans often forget that these are kids aged 18-22 trying to fulfill the same degree as everyone else. They're not athletes with multi-million dollar contracts that have their arms and legs insured.

Unlike alumni and fans who sit and criticize from afar, the students at Michigan are just that, students.  I'm friends with a water polo player, a soccer player is in my Marketing Group, I've taken a selfie with Spike at the bar, and my neighbor is one of the backup quarterbacks whose concussion protocol ultimately led to the resignation of the athletic director. These aren't just strangers in a crowd, they're real people who we share classes and activities with.

One of the best examples of this is Blake O'Neill, the Michigan punter who dropped the ball against Michigan State that ultimately gave the Spartans the victory. College football fans around the country scorned this kid for his blunder, and some of his mentions on Twitter are some of the most horrifying comments I've ever seen. 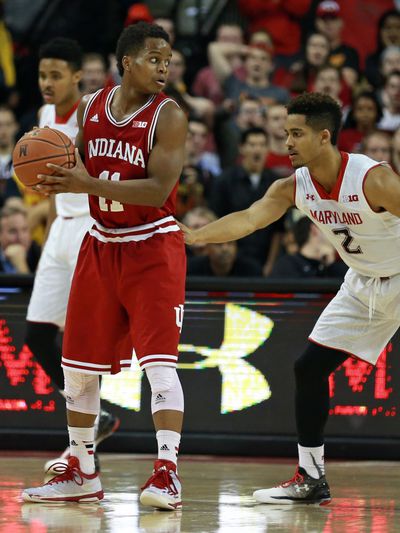 Preview the Big Ten for this season.

My mom called me the next day to ask how I was doing after the loss, and I told her the person I felt absolutely sick for was this kid. An Australian Rules Football player with a side gig as a model, O'Neill came to the U.S. to try to be a punter with a dream of making it to the NFL. He came to Michigan pursuing a graduate degree, and has had an unbelievable transition as both a Michigan student and punter.

So when he made one mistake, it was gut wrenching. O'Neill could have hid, avoided the media and continued on as an anonymous kid on the football team. Instead, O'Neill faced the media, answered their questions respectfully, and impressed the hell out of me and other college football fans, showing the true attributes of a "Michigan Man".

At a school where the product on the football field or basketball court matters equally as much as the amazing medical or philosophy research, it's been an unbelievable place to grow up. The classes have been phenomenal, I couldn't ask for any better friends, and you can't beat those Saturday morning tailgates.

So on Friday night, when Michigan opens their season with an exhibition game, the beginning of the end is here. I've lived and died with this basketball team over the last three seasons, and it's become such an integral part of my college career. I've been so fortunate to be able to write about the team I love, even being able to cover the team from the media section for a handful of games last season.

But as a senior, it's about more than wins and losses. It's about attending these games with friends, watching Caris transform from a baby-faced freshman to a potential NBA lottery pick in three short years. It's about being gutsy enough to take a trip to Columbus, Ohio in the middle of the week to watch Michigan beat Ohio State, and making it back to campus at 2:30 AM from this impromptu trip.

And it's about Michigan. A school that's given me all of these opportunities to mature and develop as a student and a leader makes it so incredibly difficult to leave. But for now, we'll push that off to the side. Michigan's basketball team is poised to be one of the best teams in the entire country, and we get to stand and watch, 5 feet from the court in the Maize Rage, as our student athletes take center stage.

They're our friends, our peers and our classmates, and one of many reasons why Michigan will always matter to me.