How will Illinois Move On Without Rayvonte Rice?

Rayvonte Rice will be out for 4-5 weeks. How will Illinois replace their best player?

Share All sharing options for: How will Illinois Move On Without Rayvonte Rice?

Illinois' season hangs in the balance right now.  They are currently 0-2 in conference play with number 11 Maryland coming to town on Wednesday.  The report out of Champaign Tuesday, that Illinois' best player Rayvonte Rice is hurt, might just push this team over the cliff.

This will be the defining movement for this year's team.  This will be the moment that tv commentators point to as when everything fell apart, or when the team came together when everyone wrote them off as dead.  If Illinois missed a strong voice before, if they seemed like they had no one in control, this will be the point when that will be proven once and for all, or when someone will step up and prove their worth.

Let no one downplay the impact that Rice's injury will have on this team.  He is by far the best player Illinois has and at times he is the only one producing any notion of offense.  When this team stalls on offense, when there is no off ball movement, it is Rice that saves everyone's butts.  He will drive the lane and put up a shot or drive and draw a foul.  He has been in many ways Illinois' "GET OF JAIL FREE" card.  Illinois could play 33 seconds of terrible offense and it didn't matter because Rice would hit a shot to save them. 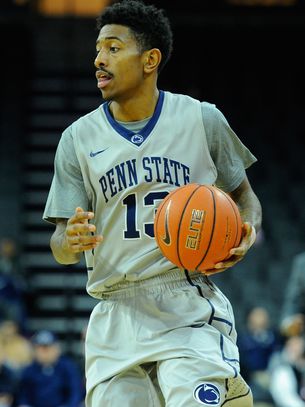 That is gone now, at least for a while.  Now it will be everyone else's job to figure out a way to stay afloat until they can get Rice back.  At 0-2 they are not even afloat right now they are sinking fast already.   Illinois will have to find a way to not only survive without Rice, but find a way to dig themselves out of a 2 game hole.  Can this team find a new lineup that works?  Can this team find another go to scorer?  Is there another star on this team that just needed a chance to show that they could take over when needed?   All of these questions will be answered in the next couple of weeks, one way or another.  For now the biggest question and one that will have to be answered by tip off tomorrow night is "Who will start in place of Rice and how will his minutes be dispersed?".

This will probably be the lineup that you see John Groce go with tomorrow night.  Anyone that has watched Illinois play this year, knows that Groce has went with this lineup before and seems to like it.  Cosby does a good job filling in for Rice as a rebounder and defender, and when he hits his shots he can be a capable scorer as well.  The biggest problem with this lineup, is you replace a high efficiency shooter with a very low efficiency scorer.   Rice shoots a blistering 51.5% from FG and 48.3% from three, while Cosby shoots a very pedestrian 29.8% from FG and 33.3% from three.  Cosby shot almost 40% overall while at Seton Hall, where he was a larger focal point of the offense  Given the change at Illinois, he just might return to that same level.  For this lineup to work, Cosby will need to find a way to play like his old self.

Groce likes to have a scoring punch off the bench and because Cosby will have to start you could see a change at point to allow Starks to become that scoring punch.  So far this season Tate and Starks have split the point guard duties, with Starks averaging almost 8 minutes more than Tate.  If Tate took over as the primary point guard, it would allow Starks to come off the bench fresh to more explosive during his minutes on the court.  The biggest problem with this lineup, is that with Rice out of the game you already remove 17 PPG, can you afford to sit Starks who is averaging 7.3 PPG to create that punch off the bench.

This might be the one crazy looking lineup for most of you Illini fans out there, but in many ways it finally puts to rest one of the biggest problems with this team.   Starks is not a point guard, he is a 2 guard that is very good with the ball in his hands.  Much like I spoke about Cosby above, Starks would have to find a way to step up his game and produce at a much higher level.   He is averaging almost 5 points less than his last season at Oregon State and Illinois would need him to return to that number if this lineup has any hope of working.  The problem with this lineup, and the reason I doubt Groce will go with it, is that they will find if very tough to guard teams.  Starks is very fast, but every 2 guard in the Big Ten will be much taller than him and he will end up being a huge weak point for opposing teams to take advantage of.  On the positive side, this lineup will be very fast and should prove to be hard to guard in transition.  This lineup also allows you to keep Cosby as your go to guy off the bench.

This one will also be known as crazy lineup number 2.  This lineup addresses the other elephant in the room when it comes to Illinois, Egwu is not a center but instead is actually a forward.  To hell with trying to replace Rayvonte Rice instead retool what you think about what this Illinois team looks like and finally start using the pieces better.  Allow Egwu to do what he always wants to do anyway and let him play facing the basket.  Let him shoot a few more threes and allow him to live off of short jumpers.  Maverick Morgan will have to man up in a very big way for this to work, but he has shown flashes that he might be able to play center pretty well in the near future.  Make teams try to deal with height of a front line of Hill, Egwu and Morgan.  Switch to zone defense and see if teams can find a way to get the ball inside.  Take ownership of the glass and make sure Illinois will no longer get beat by wide open layups and back door passes.

Overall I think the answer for Illinois will be a mix of the four lineups that I mentioned above.  They will have to get a lot more out of almost every player on the team if they have any hope of still being post season viable when they get Rice back.  In some ways this team needs to get together and start over.  They don't have the training wheels on anymore.  Rice is not going to get off the bench and fix everything.  Up until this point this season, Illinois has not played together.  They have not been a team, but instead seemed like a group of players with the same jersey playing 1 on1 basketball.  For this team to overcome this injury, they will have start playing together.  In the end this might not only be the defining moment of the season, but also the defining moment for many of these player's careers.