Conference play officially got underway last week and fans were treated to some great matchups.  Not only did we get to see Maryland and Rutgers play in their first Big Ten games, but both recorded wins with Maryland going 2-0 and Rutgers going 1-1 with a home win over Penn State.  Along with this, the conference also had some big road wins by teams like Iowa and Wisconsin.  As of Monday morning, Maryland, Purdue, and Wisconsin led the conference race at 2-0 on the season.

The Badgers reeled off two solid wins to start conference play.  Though Northwestern and Penn State are not considered to be great teams, Wisconsin controlled both games and got off to solid victories.  Wisconsin also had to face one of the best home crowds Northwestern had to offer and won pretty easily.  They get Purdue and Rutgers this week.

The Terrapins strengthened their hold on the #2 spot and have asserted themselves as perhaps the biggest threat to Wisconsin's run through the Big Ten with wins over Michigan State and Minnesota this week.  Maryland gets Illinois and Purdue on the road this week to put their perfect all-time Big Ten record on the line. 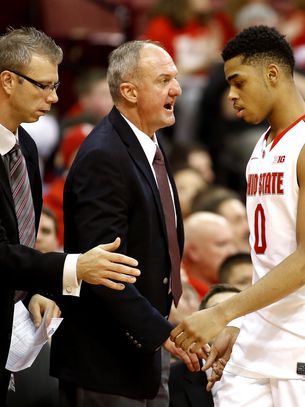 BTP takes a look at the top performing freshmen in the Big Ten this season.

The Buckeyes oddly managed to hold on to the #3 spot this week despite suffering a loss to the #4 ranked team on this list at home.  Still, Ohio State competed against Iowa and scored their biggest win of the season against Illinois at home on Saturday.  They get two tough road games this week against Indiana and Minnesota.

The Hawkeyes scored what is arguably the most impressive win of the conference season so far after they went on the road and beat Ohio State.  Iowa still has no bad losses on the season and look like they could be a team to reckon with as the season continues.  If they can do well against Michigan State and Nebraska at home this week, they could make a strong case for themselves as a Big Ten threat.

The Hoosiers opened conference play on the road and scored a solid victory over Nebraska in one of the Big Ten's toughest road venues.  They will continue on the road against Michigan State and look to move to 2-0 on the year.  It would be a huge victory for what has been an up and down season so far for Indiana.

The Spartans narrowly lost their Big Ten opener in double overtime to a good Maryland team and will look to score their first victory of significance this season at home against Indiana.  Michigan State needs big wins to put on their resume and Monday is a time when they really need to convert.

The Boilermakers scored two surprising victories to open conference play over Michigan and Minnesota and very well look like they could make some noise this season.  They have two huge games this week against Maryland and Wisconsin to prove if they are for real or not.

The Gophers got off to a rough start in conference play with an 0-2 start against Maryland and Purdue.  Still, considering neither game came at home and the hot starts for both of those teams, Minnesota certainly still has some hope ahead.  They get Michigan and Ohio State this week.

The Illini were another team to start 0-2 on the season after starting with two road games.  However, Illinois lost a close one in overtime to Michigan and competed well with Ohio State for a good hunk of that game.  They get Maryland and Nebraska this week.

The Wolverines started Big Ten play at 1-1 with a home win over Illinois and a road loss to Purdue.  At times, Michigan looked really solid and at other times, looked downright ugly.  They get a winnable road game against Penn State and a home game against Minnesota this week.

The Cornhuskers dropped their Big Ten opener to Indiana at home and were off for the weekend.  They will try to rebound against a hot Iowa team on the road.

The Nittany Lions had a rough start to conference play at 0-2 with road losses to Rutgers and Wisconsin.  Penn State still has some NCAA hopes, but they will have to get back on track quickly against Michigan this week.

The Wildcats went 1-1 this week and narrowly hung on to the #13 spot.  They beat Rutgers and got blown out by Wisconsin over the weekend.  They get Michigan State this week.

The Scarlet Knights recorded their first Big Ten win this week over Penn State and although they lost to Northwestern at home, it was still a good week as the potential 0-18 Big Ten season was off the table.  They get Nebraska and Wisconsin this week.