Michigan beat Nebraska at home, 58-44, without Derrick Walton Jr. or Caris LeVert. We break down the victory and key players here.

Share All sharing options for: How Michigan's Roster Keeps Fighting Despite Injuries

All season, Michigan hasn't been able to live up to expectations. National pundits point to the obvious losses against NJIT and Eastern Michigan. The Wolverines had a chance in their final non-conference marquee game to knock off SMU and failed to do so. Even in a win against Northwestern, Michigan lost their do-it-all player Caris LeVert to a season-ending foot injury. The sky was falling down, or so people thought. But John Beilein hasn't racked up over 700 wins by letting an injury (or three) stop his quest for college basketball victories.

On Tuesday night, Michigan played a gritty, determined, loose brand of basketball that was a joy to watch. The first half was shaky, as the Wolverines only led 23-18, but the second half was a masterpiece on both the offensive and defensive end. When all was said and done (and Nebraska added a few cheap points in the last minute), Michigan outlasted the Cornhuskers 58-44.

Michigan was led by a gutty performance from sophomore Zak Irvin. Irvin finished with 14 points and 12 huge rebounds, his first double-double this season for the Wolverines. When his shot wasn't falling, Irvin was able to play great defense and battle the Huskers on the boards to keep up his high level of play. Irvin is having fun again, as he let out a huge smile and roar when his and-1 shot bounced around the rim 4 or 5 times before dropping in.

If Irvin was the man in the second half, then Aubrey Dawkins gets the tip of the cap for his brilliant first half performance. Dawkins had all 13 points in the first half, including 5-6 shooting from the field and 3-3 from deep. Dawkins seems to be the answer alongside Irvin in the frontcourt, as his length and athleticism make him a threat on both ends of the floor. Dawkins is gelling and playing with supreme confidence, something Michigan fans should be extremely excited about. 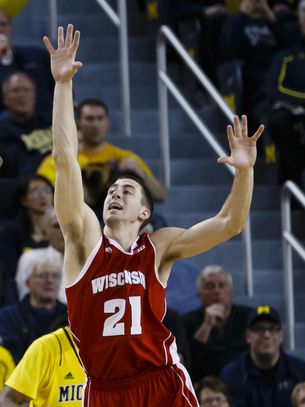 While Irvin and Dawkins handled business on the wings, it was a similar sized player that did his dirty work in the paint. Seldom used throughout his first three years, Max Bielfeldt is ready for the challenge. He was absolutely phenomenal on the boards like Irvin, finishing with 9 including 4 offensive. Bielfeldt also shot 6-9 from the field, and only missed one shot inside the arc. He isn't the answer against legit 7-footers that teams like Wisconsin and Purdue have, but against big men that aren't as dominant, Bielfeldt has the opportunity to shine.

Perhaps the biggest surprise of the evening came from the Michigan backcourt. Starting with Muhammad-Ali Abdur-Rakhman, the freshman was playing confident from the start, totaling 37 minutes and finishing with 9 points on 4 layups and a free throw. Derrick Walton was unable to go because of his toe, and MAAR took the challenge head on.

His backcourt mate, Spike Albrecht, did not have any field goals, but was lethal at darting through the lane and dumping off passes for teammates. His best assist was a pass when he was falling out of bounds (his specialty) and a dump off to Bielfeldt, who thunderously slammed home a dunk. Spike looks to be much healthier than before, and Michigan is going to need him. Going forward, I would expect to see very little of Andrew Dakich (who played 8 minutes tonight) and expect Spike, MAAR and Derrick to split the 80 minutes at the two guard spots.

Speaking of Dakich, he played the same number of minutes as top-50 recruit Kam Chatman. Chatman started the year in the starting lineup and was supposed to give Michigan a point-forward option anywhere from shooting guard to power forward. Instead, the Chatman experiment has gone haywire, as the freshman finished 0-3 from the floor with 3 turnovers and a foul. I don't know whether Beilein will keep Chatman in the rotation after his recent play, but I certainly wouldn't.

One thing is for certain: don't count out this Michigan team. Though only 6 players played more than 8 minutes tonight, the 6 that went out there and battled were brilliant for Michigan. John Beilein knows how to get the most out of his players, especially when the odds are stacked against them. Michigan has a very good Michigan State team on Sunday, but Michigan won in East Lansing last year and this Spartans team is significantly worse. Keep betting against Michigan; it adds fuel to the fire. Just don't expect them to crumble without their leader. John Beilein sure as hell doesn't, so why should they?