After a less than desirable non-conference performance, the Iowa Hawkeyes have bounced back in Big Ten play and find themselves in the AP Top 25 for the first time this season.

The Iowa Hawkeyes are hot. Behind the scenes of the Big Ten leaders in Wisconsin and Maryland, this Iowa squad has been lurking closely and waiting to leap on the opportunity for a Big Ten title run. Led behind leading scorer and senior Aaron White, the Hawkeyes may just have what they need this year to make an NCAA tournament appearance and run.

Last year's promising Iowa squad began to fall flat come the end of the season. After being a sure tourney team in the middle of February, Iowa found itself barely making the First Four come selection Sunday. The result was an early exit in the round of 68 to the Tennessee Volunteers. The Hawkeyes lost Roy Devyn Marble to graduation, and hope for next season began slipping away, especially after a 2-2 start to the 2014-15 season.

But this Iowa team has since shown grit and toughness in its ability to win huge games. I'd first like to point out that Iowa's schedule thus far has been no cake walk. During the non-conference slate of their season, the Hawkeyes faced four ranked opponents (Texas, Syracuse, Iowa State, North Carolina), and a tough Northern Iowa team that now resides in the Top 25. Though they fell to four of these five opponents, the Hawkeyes didn't suffer a bad non-conference loss, and they were even able to get a season-changing victory on the road against the North Carolina Tar Heels. 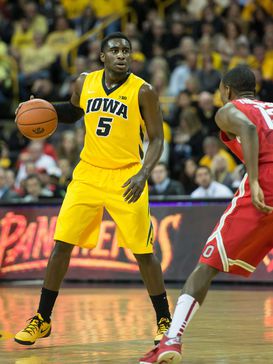 There was certainly some skepticism entering Big Ten play for this Iowa team. The Hawkwyes had failed to get the job done against major opponents in its non-conference schedule, with the exception of North Carolina, and the Big Ten was going to be troubling for an Iowa team that lost four times and lacked a leader. But now, the Hawkeyes have turned it around and find themselves in the race for the Big Ten title.

After a huge win on the road against the Buckeyes, Iowa raised some eyebrows across the league. Three of the next four games also ended with Iowa victories, and all of a sudden, the Hawkeyes find themselves ranked for the first time this season (#25 in the AP Poll). More importantly, Aaron White has emerged and taken on a leadership role that lacked in the non-conference slate of the season. White is averaging 19 points in Iowa's four Big Ten wins, and is clearly the focal point of the Hawkeye offense. Head coach Fran McCaffery trusts his star player and knows that he can lead his team to more than just another NCAA appearance.

The Hawkeyes have only shown one sign of inconsistency in this early conference season. After an 11 point first half lead on the Michigan State Spartans at home, Iowa gave up 47 second half points and ended up losing by 14 points. The Hawkeyes shot just 16% from three point range and allowed Michigan State to get a big road win. Aaron White was virtually non-existent with 8 points and 4 rebounds. Clearly, he is the key for this Iowa offense and the player that sparks this team and propels it to victory.

Iowa goes on to face Wisconsin on Saturday in likely its biggest match up of the season. Though the Badgers will certainly be the favorites, the Hawkeyes are notorious for being road warriors, and there is certainly a chance for Iowa to get a big conference victory over Wisconsin. Look for this team to some damage if they keep playing through their senior Aaron White and keep grinding out tough victories.