It was a wild week for the Big Ten in what finished up with an exciting Sunday evening topped by Rutgers upsetting Big Ten frontrunner Wisconsin at home.  Over the weekend, many of the Big Ten teams were forced to go on the road into hostile environments and it led to a few major upsets.  With that comes the most interesting Big Ten Power Rankings in weeks.  As of Monday morning, Maryland, Michigan, Michigan State, and Wisconsin led the Big Ten with a 3-1 record.

The Badgers had their first hiccup in conference play on Sunday with a big upset on the road against Rutgers.  Still, with Traevon Jackson and Frank Kaminsky sidelined, this one was not as unexpected as some would believe.  Wisconsin sits at 3-1 in conference play and will get Nebraska at home this week.

The Terrapins narrowly came in at #2 this week after losing to Illinois and beating Purdue on the road.  At this point, it seems like there is a big split with the voters on whether Maryland or Wisconsin deserves to be #1 this week, but the Terps have a challenging week with Rutgers and Michigan State at home to make their claim.

What We Learned: Wisconsin at Rutgers 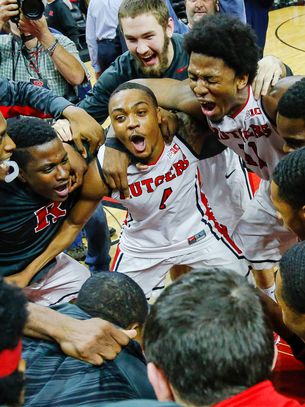 What can fans take from Rutgers' big win over Wisconsin?

The Spartans had statements games last week where they stomped Indiana at home and went on the road and won convincingly over a good Iowa team.  Now, Michigan State will have to look to avenge its only Big Ten loss when they go on the road to face Maryland.

The Hoosiers had a bad loss on the road to Michigan State to start the week, but they rebounded with one of their best wins of the season over Ohio State at home.  However, this will be a vital week for building Indiana's resume as they get Penn State and Illinois.  Both appear to be challenging games, but two wins would be huge.

The Buckeyes continue to remain as one of the hardest teams to place in the Big Ten right now.  For the second week in a row, they went 1-1 as they beat Minnesota and lost to Indiana.  This team has the potential to be very good, but continue to be inconsistent against tough opponents.

The Hawkeyes looked like they were in position to become a major Big Ten contender at home against MSU last week, but fell apart in the 2nd Half and came up with a dud against the Spartans.  Now, Iowa will face Minnesota and Ohio State this week in games in tight games that could go either way.

The Wolverines are gradually starting to work their way on the conference radar as they notched off wins against Minnesota and Penn State last week.  This will be a huge week for Michigan with rival Ohio State on the road and Northwestern at home.  Two wins here could really change the discussion about this team.

The Cornhuskers are another team that is flying under the radar, but continues to improve.  Nebraska knocked off wins over Illinois and Rutgers last week and are starting to play much better.  They get Wisconsin on the road this week, which is when fans will see whether Nebraska has really improved.

The Boilermakers sit at just 2-2 in conference play, but faced one of the most challenging weeks of any team all season as they got Wisconsin on the road and Maryland at home.  They ended up losing both games, but looked good for long stretches.  Things get easier with Penn State and Illinois this week.

The Illini are easily in the Top 2 Big Ten teams for most disappointing start to conference play.  After entering Big Ten play with a 10-3 record and one of the conference's top non-conference victories, Illinois sits at just 1-3 in Big Ten play with losses to Michigan, Nebraska, and Ohio State.  The good news is that all of the losses came on the road and some with unusual circumstances.  Still, it has been a rough start.  Illinois will look to rebound against Northwestern and Indiana this week.

The Golden Gophers sit at 0-4 in conference play, but have yet to suffer a bad loss.  It's been an odd yet frustrating start.  They get Iowa and Rutgers this week.

The Scarlet Knights may have pulled off the most impressive win in school history last weekend and now sit at 2-2 in conference play.  Before the season, people were reasonably debating whether Rutgers could go 0-18 in conference play and now they just beat a Top 5 Wisconsin team at home.  It's been so good that Rutgers even received a #1 vote (!!!) in our rankings.  We have some comments on this below.

The Wildcats lost their only game this week on the road against Michigan State in overtime.  It may have been a moral victory, but Northwestern is now 1-2 in Big Ten play.  They get Illinois and Michigan this week.

The Nittany Lions wrapped up another rough week of conference play by losing their only game of the week at home to Michigan.  They get Indiana and Purdue this week.

One of the most interesting votes in this week's poll came from Dave White of On The Banks, which is SBNation's Rutgers blog.  In fact, he actually voted Rutgers at #1 this week.  Obviously, this is a bit out of the ordinary as no other voter had the Scarlet Knights above #11.

When an unusual vote appears such as this, BTP's policy has been to ask the writer for specific comments regarding the vote.  This way, voters don't feel pressured to "fall in line" with other voters, but can still be held accountable by readers for their decision and give some reasoning as to their vote.  Here are Dave's comments:

"Yeah, I get it, this may upset the integrity of the list. Maybe you can write this off as silly and go back to being serious next week, but I couldn't help it.  After years of losing, the Mike Rice scandal and a team that has taken a beating both in the rankings and on the court--we deserve this.  There was one thing I wanted to make sure in this poll, and it was that Rutgers wasn't in the basement.  Winning against number 4 Wisconsin?  Being 2 and 2 in the Big Ten?  That deserves a step up in the rankings and this poll.  So, I did it.  I ranked them number 1.  Yeah, it's a goof--and I promise you, dear readers, I'll go back to being serious next week... but Rutgers' players, coaches and fans deserve that win last night.  And for one week... I don't want to be in the basement.  So, I cheated ... just a little.  Please forgive me..."

Obviously, it appears to be a bit tongue in cheek, but it was a big win for Rutgers.  I went back and recalculated and if Dave had voted Rutgers at #11, Northwestern likely passes them in these rankings, so definitely something to keep in mind.