Where Does Michigan State Go After A Rough Weekend?

Michigan State went through one of their roughest offseason weekends in recent memory. What does MSU have to do to move forward?

Share All sharing options for: Where Does Michigan State Go After A Rough Weekend?

Over the weekend, the Spartans took not just one blow, but two big blows to not only their recruiting, but the prospects of their team next season.  On Saturday afternoon, it was announced that Montaque Gill-Caesar would be headed to Missouri over MSU and others.  For most fans, that would have been disappointing enough, but it was the breaking news later on Saturday night that sophomore Kenny Kaminski would be transferring from the program that really was disappointing.  Two big hits like this would leave any fan's head shaking and there are questions about where the Spartans will go from here after a rough weekend.

The first thing to address is that these are real and legitimate hits to the program.  Gill-Caesar not only was rated as one of the top recruits in the nation, but he reclassified to 2014 and will be playing this season.  A lot of people like to minimize or overlook recruiting, but when you're talking about players that are going to be on the court in just a few months that really could impact your team and depth, that's a big deal.

Here is what 247Sports had to say about Gill-Caesar's commitment to Missouri:

"Prior to re-classifying to 2014, Gill-Caesar was considered a five-star prospect by 247Sports National Scouting Director Jerry Meyer. Michigan State and Kentucky were among the programs showing interest as a 2015."

Now, to be fair, there were some odd moves in this recruitment and Missouri's decision to hire Gill-Caesar's high school coach as an assistant was probably a major factor in the recruit.  Once that happened, it seems unlikely that MSU would have stayed at their 35% on the Crystal Ball.  Now, that doesn't mean MSU made the wrong decision in their recruitment of Gill-Caesar - in fact, they probably made the right decision by not hiring his high school coach - but that still leaves them without a major recruit for next season.

There are multiple ways to view the loss of Gill-Caesar, but at least MSU is not really "losing" anything because they never had him in the first place.  That's not the case with Kenny Kaminski, as he will be transferring from the program.  Kaminski was far from being a great player for the Spartans last year and seemed a long way from moving into a starting role, but he was still a valuable backup.  On BTP's MSU Depth Chart Preview, we had Kaminski listed as the backup at power forward.  In reality, Kaminski would have probably been the first big off the bench, which is a very valuable position considering how many frontcourt players get into foul trouble on a regular basis.

The other thing to note here is that the storyline is that Kaminski transferred due to academic reasons.  There has been no confirmation to these rumors, but they do appear to have some traction.  Essentially, we're not talking about a guy who is transferring for playing time or for a new system.  Some have tried to minimize the loss of Kaminski by claiming that he was being passed on the depth chart, but we really just don't have evidence to support that.  From what we can see, it was an off the court issue that did this, not anything to do with his play.  So considering the value of your first backup big man, this is an important loss.

[EDIT: In a statement, Tom Izzo revealed that Kaminski was kicked off the team and did not leave on his own volition.  These was different than the rumors and developments originally reported.]

Ultimately, this is going to leave the Spartans in an interesting position going forward.  Most were already looking at the 2014-15 season as a rebuilding one in East Lansing, but the hits keep piling on.  With Kaminski, MSU had at least a proven bench guy upfront and with Gill-Caesar, you potentially have your replacement for Gary Harris.  Instead, they will be without both of those next season.

Here is what The Only Colors has as the scholarship chart: 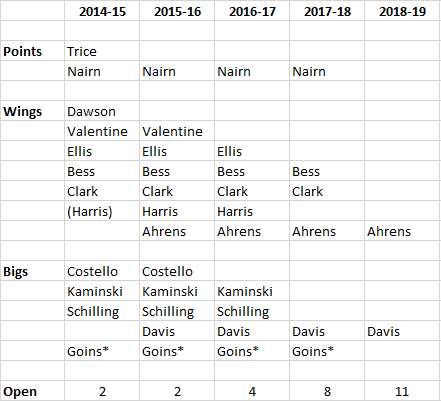 Now, there is obviously one big red flag on that chart as it still assumes Kaminski is on scholarship.  The Spartans are slated to have just 10 scholarship players next season before potentially pulling up some walk-on players.  The big area for concern is clearly upfront.  The Spartans will be left with Costello and Schilling as the only true "bigs" on the roster.  Now, Branden Dawson and Kenny Goins (preferred walk-on) will be able to play at the 4, but there is certainly going to be a lack of size on a team that prides itself on rebounding.

So what does MSU do now?  The answer is one that probably won't leave a ton of Spartan fans satisfied.  The first thing to say is that MSU is not in a panic situation.  Plenty of teams play "down" scholarships.  Just look at Michigan, who is slated to have an open scholarship next season.  This is not always a bad thing.  Having open scholarships keeps the recruiting wheels turning and allows a program to avoid simply offering bodies to fill out the roster.  The bottom of your bench rarely sees action, so it's often a better decision to bank a scholarship than have a non-contributing player with a low ceiling on your team for the next 4 years.  Also, with a scholarship likely going to Goins, MSU is probably only going to be 2 scholarships down.  That's not a huge issue.  The fact that Eron Harris (transfer) can't play this year does add some concern, but there are at least some bodies where Harris would have likely played, which decreases that impact. 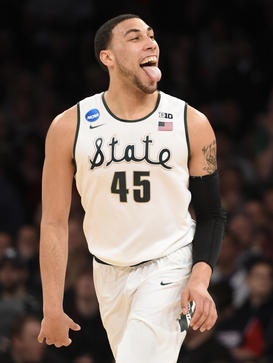 The Spartans look to avoid a rebuilding year

Despite this, there are real concerns about next year's team that specifically relate to Gill-Caesar and Kaminski.  Just look at the role Gill-Caesar would have likely filled next season.  There are some decent guys there, but shooting guard is a question mark for the Spartans next season.  Trice could potentially slide over and play there and has showed a lot of improvement, but he definitely is not Gary Harris.  Plus, that depends on Lourawis Nairn having an impact as a freshman, which is a question in itself.  Outside of Trice, you're really just hoping Alvin Ellis or Javon Bess can produce.  Both could be decent long-term, but neither look like the kind of prospect that Gill-Caesar should be next season.  There's no guarantee that Gill-Caesar would have been great, but you probably have a spot locked down with him and you still have the other guys to be backups.  Now, the guys you were likely hoping would be backups this season are going to have to fill the starting role too.

Still, the more concerning loss has to be Kaminski.  As noted above, you're probably not losing a starter, but you are almost definitely losing the first big man to come off the bench and considering the lack of "true bigs" on MSU's current roster, that's going to be an issue.  There will be a time in the season where MSU has to reach to that third center because Costello will be in foul trouble.  Goins (6'8") seems like he has to be the guy to move over.  Clark is 6'7" and Dawson is 6'6'.  You can talk about playing undersized, but you are going to be in major trouble if you have to play a 6'7" freshman or a 6'6" guy at center for any significant minutes.  In short, Goins is going to be your 3rd guy here in all likelihood, which will be a non-issue in most games, but will matter if Costello or Schilling get into foul trouble.  This also assumes all are available.  Spartan fans will hate to hear this word, but when you only have a few depth options, the players' health could be an issue.

Tom Izzo and staff don't have to jump into a panicked state throwing out offers to any high school prospect they know, but there are going to be real concerns next season due to these two developments and I anticipate that they will adjust some of their in-game strategy to compensate for those issues.  For instance, Costello is probably going to be hammered about not fouling and you will probably see some difference defensive schemes to attempt to get Goins and others on the court as much as reasonable.

The Gill-Caesar loss hurts because you lose out on a top notch prospect that could have impacted the team immediately, but the Kaminski loss is far more concerning as MSU is going to be very thin upfront.  At this point, MSU probably has what they have for next year, but that doesn't mean they can't do things to help next year's team.  If the Spartans can get a little lucky next season and get some production out of lower players, they might be able to avoid a rough rebuilding year.