Wisconsin Basketball vs. Big Ten Football - Who Is More Likely To Win It All?

The Big Ten has not won a national championship in basketball or football since 2002. So do the Wisconsin Badgers basketball team or the entire Big Ten football conference have better odds to win it all?

Share All sharing options for: Wisconsin Basketball vs. Big Ten Football - Who Is More Likely To Win It All?

Even though BTPowerhouse is solely a Big Ten basketball blog, I thought it seemed like a good time to have some fun with Big Ten fans and try to mix in some Big Ten football discussion.  A little while back, I posed a question that elicited quite a bit of feedback on Twitter:

If you had to place a bet on someone to win the national championship this year, would you bet your money on Wisconsin's 2014-15 men's basketball team or the entire 2014 Big Ten football conference?

To put this in perspective, just compare some of the recent performances by the Big Ten in the respective sports.  Last season, the Big Ten had the most teams in the Elite 8, led the nation in KenPom, and not only had 6 teams in the NCAA Tournament, but also had the winner of the NIT.  The Big Ten has sent a team to the Final Four in each of the last 3 seasons and sent 4 teams to the title game since 2002. 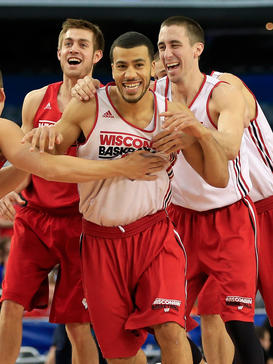 The Badgers look like they will be stacked in 2014-15, but how good could they be?

Considering this, it's pretty unfair to compare just the conferences.  This brings us to our question.  Big Ten basketball gets what is largely assumed to be its most talented, deepest, and best team for the upcoming season: Wisconsin.  Big Ten football gets every team in the conference.  It's crazy to think that a 1 vs. 14 battle would be an interesting discussion, but due to the layout of the respective sports, it really is close.  Let's throw out a little groundwork here.

The Badgers may not have been the best team in the country last season, but they had one of the best resumes in the nation and really came on at the end of the year.  They had a great performance in the non-conference season, finished 2nd in the Big Ten, made the Big Ten Tournament Semi-Finals, and made the Final Four.  Plus, if Kentucky doesn't hit that late shot, maybe the Badgers make it to the National Championship game.

This year, Wisconsin brings back almost everything from their Final Four team, add a 4* recruit, and get an offseason to continue developing young players like Nigel Hayes.  Not only is it difficult to imagine Wisconsin regressing, it's almost tough to see them not improving for next season.  That's a tough thing to see, but just raw year-to-year development implies improvement.  Though there will be some absolutely loaded teams in Arizona, Duke, and Kentucky, the Badgers are going to have the firepower to hang with everybody.  They should be a top notch team.

As of now, Wisconsin is being given 12/1 odds to win it all next year.  These are the 3rd best odds behind Kentucky at 5/1 and Duke at 9/1.  VegasInsider also has Wisconsin at #3 nationally to win the NCAA title, but at 10/1 odds.  This is far from a guarantee to win int all, but that's a pretty nice spot to be preseason.

The Big Ten is coming off one of its better seasons in recent years, which was largely driven by a strong Michigan State team that won the Rose Bowl.  This was the Big Ten's first Rose Bowl win since Ohio State in 2010.  Nebraska pulled off a win over a hampered Georgia team and Ohio State fell in the Orange Bowl against Clemson.  The rest of the Big Ten teams didn't do much in the bowl games.

This year is the first year of the College Football Playoff, so a Big Ten team only has to be in the top 4 to have a fighting chance for the title.  Currently, the highest ranked team in the AP Poll is Ohio State at #5 (it is worth noting that with Braxton Miller's injury, the Buckeyse would probably have not been ranked there).  After that, it's MSU at #8, Wisconsin at #14, and Nebraska at #22.  In terms of odds, MSU and Wisconsin have 30/1 odds, Michigan and Ohio State have 50/1 odds, and Iowa has 85/1 odds to win the NCAA title.

There's also one final factor that has to be considered.  There isn't necessarily a guaranteed spot in the Playoff for a Big Ten team.  If teams from the ACC, Big 12, Pac 12, SEC or Notre Dame go undefeated, they could easily be ranked above a Big Ten team.  In fact, the highest ranked Big Ten team right now is Ohio State at #5, which would not be good enough for the Playoff.  Obviously, winning the Playoff is hard enough, but the Big Ten has to worry about even getting there.  Wisconsin is basically a lock for the NCAA Tournament, so even if they're a low seed, they at least have a direct path to the title.  The same cannot be said about Big Ten football.  This doesn't mean a Big Ten team can't make the Playoff, but you have to at least note the different routes.

There are really two ways to go with this thing.  Either you buy Wisconsin's hype and the Big Ten's mediocre recent football performances, or you simply buy into the raw numbers and go with Big Ten football.  Sure, you could try a middle ground by citing some hoops teams like Kentucky, or talking about a team like Oklahoma or Oregon collapsing and opening up a Playoff spot, but ultimately, this is going to come down to your assessment of Wisconsin's value and the value placed on Big Ten football.

For me, this is a pretty easy pick for Wisconsin basketball, especially after hearing about Braxton Miller's injury.  Who knows what will happen with Ohio State, but when you take a big hit on a serious Playoff contender, that really hurts Big Ten football in this discussion.  Just think about it this way.  Sure, this is a 1 vs. 14 battle, but in reality, this is more of a 1 vs. 5 battle - and probably even less than that.  In theory, any Big Ten team could make the Playoff, but simply due to the fact that those teams play each other, you know for a fact that more than half the conference will be eliminated just through conference play.  Add in a few non-conference losses and you're down to a handful of teams before you even start factoring in things like upsets, conference strength, program perception, and margin of victory.  When you break it down like that, things really start to lean Wisconsin's way.

BTP's full preview of the 2014-15 season including conference, team, schedule, and recruiting breakdowns.

There are two noteworthy rebuttals to my analysis above.  Let's go through them.  The first deals with Michigan State.  The Spartans could have very likely made the Playoff last year.  This is completely true, but it's also important to note that first, we don't know for a fact they would have made it as there with several teams in legitimate contention, and second, the team loses a lot from last season.  MSU could still very likely put together an impressive record, but there's also a pretty solid shot they drop off in some areas like the secondary and offensive line.  Plus, remember those few games that were randomly close for MSU last year like Indiana and Purdue?  If MSU drops either of those games, the Spartans miss the Playoff.  We have to remember how thin the line is in college football and MSU could very well be on the wrong side this year.  Again, no guarantee, but the point here is that Wisconsin basketball could lose a ton of games and make the title game, but MSU might not even be able to afford one loss.

The other rebuttal deals with the elite college basketball teams coming into next season.  There's no doubt Wisconsin has their work cut out for them with teams like Duke and Kentucky.  However, this ignores two things.  First, simply because you're the best team doesn't mean you're going to win it all.  Just look at last season, where UConn didn't win their conference, finished #8 on KenPom, and won it all.  Florida was the #1 seed and got eliminated by UConn.  Along with this, you can't ignore the fact that college football has elite teams too.  Teams like Alabama and Florida State are not going to be pushovers.  Frankly, those teams could be just as tough to beat back-to-back as a Duke and Kentucky combo.

Overall, Big Ten football has more raw chances to make and win the title game, but when you actually take the factors into account like the Playoff and national perception, I think this question has to lean Wisconsin.  Of course, there is always some wiggle room in these types of questions.  So, have it.  Who is more likely to make the title game?  Let us know in the comments.