While they're not the Big Ten's best right now, Northwestern and Illinois have kept their rivalry interesting with lots of competitive games in the last several seasons.

Northwestern-Illinois is one of the few in-state rivalries in the Big Ten and one that is heating up on the hardwood. The two teams have each taken five games in their last ten matchups, and they have each have a new coach succeeding tremendously on the recruiting trail. Historically, the rivalry is very one-sided, but the promising future for both schools in the Land of Lincoln should turn some heads soon.

The series history between Northwestern and Illinois is one-sided, to say the least. Illinois leads Northwestern all-time with a total record of 130-39. The Illini have dominated the 'Cats at home, going 39-6 at Assembly Hall since it opened in 1963.

Northwestern's basketball history is quite dismal, with a few brief periods of success in the early 1930's, mid-1960's and around 2010 near the end of the Bill Carmody era. Illinois, on the other hand, has consistently been a winner and boasts an all-time winning percentage above 65 percent. The Illini have totaled 30 NCAA tournament appearances, compared to NU's zero.

Illinois has owned Northwestern of recent, winning 22 of their last 28 match-ups. The margin is even greater when the two meet in Champaign, where the Illini have taken 28 of 31 dating back to 1980.

Both schools have hired new coaches in the last two years after long tenures by Bruce Weber and Bill Carmody. Weber filled in at Illinois as Bill Self departed for Kansas in 2003, and the Illini quickly put together two fantastic seasons. Weber led them to back-to-back conference titles and the 2005 national championship game. Illinois continued to get 20-win seasons and make NCAA tournament appearances, but they'd never come close to the 37-2 record they posted in 2004-05, and Weber was relieved of his duties in 2012. Recent season results for Illinois:

John Groce started his term at Illinois with a pair of 20-win seasons and one trip to the NCAA tournament. The Illini finished 7th and 8th in the Big Ten in 2013 and 2014 respectively. The team was only slightly behind program expectations, but they've lost two of three to Northwestern with Groce at the helm.

Before hiring Chris Collins, Bill Carmody was the head man at Northwestern for 13 seasons. The Wildcats' remained below par for Carmody's first eight seasons, but then John Shurna came to Evanston. Shurna led NU to four straight NITs and the program's first ever 20-win season. But after Shurna's graduation, the 'Cats returned to mediocrity with 13 wins in 2012-13, and Carmody was fired. Recent season results for Northwestern:

Collins started off 1-0 against Illinois by beating Groce and the Illini this January, the only meeting between the two in 2014. The Illini faithful filled Welsh-Ryan Arena with lots of orange as usual.

Who says Northwestern can't pack an arena??? Granted there was plenty of orange in there pic.twitter.com/ibnvdr08M3

Prior to this season, Illinois and Northwestern had split the season series four seasons in a row. The back-and-forth affair was new to the rivalry though. Illinois won ten straight from 2004 to 2009 and has owned the land of Lincoln, in basketball at least, over the last couple decades.

Although the two schools are in the same state, same conference and have Chicago within driving distance, Illinois and Northwestern rarely recruited the same players out of high school. The Illini's program has been much stronger, allowing them to bring in top prospects, while NU settled for two and three star recruits.

However, times are changing. In his first year as head coach, Chris Collins put together a five-star recruiting class, ranked in the top 60 nationally, which included ESPN top 100 recruit Vic Law. Meanwhile, Groce landed three four-star recruits for the classes of 2014 and 2015, including local stars D.J. Williams and Aaron Jordan. Here is a breakdown of Northwestern and Illinois's recent recruiting results (via 247sports.com):

The single recruit in Northwestern's 2013 class, Nate Taphorn, was the final recruit from the Carmody era. Since Collins took over, NU's recruiting has improved immensely. After assembling arguably the best recruiting class in Northwestern history, Collins landed two early commitments for the class of 2015 and is still hoping to add a couple four-star forwards.

Groce also has a head start on the class of 2015 with the commitments from Williams and Jordan. The Illini's 2015 class surely won't stay at number 7 in the country, but it's going to be really good. Things are looking up for both Northwestern and Illinois, but the Illini still hold a significant edge on NU in recruiting.

While Champaign has a good idea of what it will see on the hardwood in the upcoming season, there are a lot of questions surrounding Northwestern's squad. The team has six new players, five freshmen and senior transfer Jeremiah Kreisberg. It's uncertain who will start at point guard since Dave Sobolewski struggled throughout last season and two talented ball handlers in Johnnie Vassar and Bryant McIntosh have joined the team. And with so much inexperience, it's uncertain how much depth Collins will have on the bench.

Illinois returns its star backcourt duo of seniors Tracy Abrams and Rayvonte Rice. Kendrick Nunn and Malcolm Hill will get plenty of time at the third guard spot. Nnanna Egwu will continue to man the center position, leaving just the power forward spot to be filled after Jon Ekey's departure. The Illini only have three other forwards on the roster, sophomore Austin Colbert and freshmen Leron Black and Michael Finke. Like Northwestern's point guards, the youngsters will battle it out for playing time at power forward. 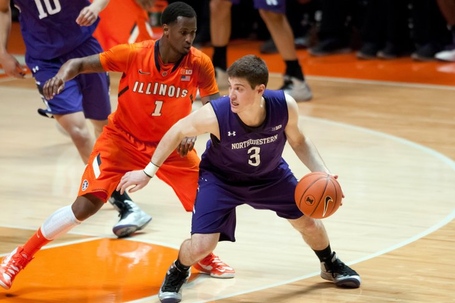 Illinois can depend on its veteran leaders but could have some depth issues. The Illini should improve slightly if Rice and Abrams build off their strong 2013-14 performance and someone steps up at power forward. Leron Black, who ranked 42nd nationally in the 2014 class by 247, may just be the man for the job, and Illinois should take one, if not two, of its games against NU this season.

Northwestern loses one of its all-time greats in Drew Crawford, so Collins will need his recruiting class to learn the college game quickly for NU to improve. They still have scorers Tre Demps and JerShon Cobb in the backcourt and Alex Olah in the post. Depending on how well the new guys perform, NU could win anywhere from 10 to 20 games. Most likely the 'Cats finish with about 14 wins again, except more of them come in non-conference play.

A lot of people focus on the Northwestern-Illinois rivalry on the gridiron. The two schools have similar-caliber programs, making the battle for the Land of Lincoln Trophy almost a toss-up each year. But the basketball rivalry could be just as good in the coming years.

The recent recruiting by Northwestern and Illinois prove Chris Collins and John Groce have these programs moving in the right direction. If the talent they have lured in turns out like expected, both teams will be Big Ten contenders in several years. And with Chicago not far away, Collins and Groce can continue to bring in lots of local prep stars.

The rivalry has been much more competitive recently too. Northwestern and Illinois have split their last ten matchups. Illinois' program is still ahead of NU in recent success, recruiting and future outlook, so they are winning the rivalry. But the beautiful part of a rivalry is anything can happen with two competitive teams. If Northwestern turns into a winner as Illinois returns to its former glory, the 'Cats and Illini could be entertaining Big Ten fans for many years to come.