On the gridiron, when Michigan and Ohio State battle, it's simply referred to as "The Game." Though the teams' battles on the hardwood have not been as intense historically, that may be changing.

One of the special things that separate college sports from the pros are the great rivalries between college teams.  Of course, the Big Ten has plenty of its own rivalries and some of the most well known and intense rivalries in the nation.

One of the best rivalries in this group features the Maize and Blue against the Scarlet and Gray.

The Wolverines against the Buckeyes.

Though this rivalry is largely known for what has occurred on the gridiron during "The Game," the two programs have battled since 1909 in some of the most exciting Big Ten games in history.  To add even more, the two programs have been trending upward with both teams winning the Big Ten over the last three seasons, both teams making the Final Four over the last three seasons, and both teams being National Runner-Up since 2007.  These two programs are playing some of the best basketball in the country and are doing it at the same time.

So where does this rivalry stand?  Is it in good shape, or bad?  And of course, who is "winning" the rivalry?  Let's break down some of the key factors and events in the rivalry and where things are headed.

Ohio State leads Michigan with a total record of 98-76 (98-69).  The Buckeyes also won the first game of the series in 1909 by a final score of 29-22.  Overall, the series has been pretty competitive with both sides having periods of success.  Michigan controlled the 1990s, but Ohio State controlled much of the 2000s.

When Thad Matta become Ohio State's head coach during the 2004-05 season, he not only built some of the best teams in the nation, but he also led a dominating run over the Wolverines.  Matta won his first 7 games against Michigan and 9 out of his first 10.  Outside of a slip-up in 2007-08, the Buckeyes were perfect against "That School Up North" for Matta's first 5 seasons.  Even now, Matta still has an impressive 17-6 record against Michigan.

Could Next Year's Michigan Be Last Year's Indiana? 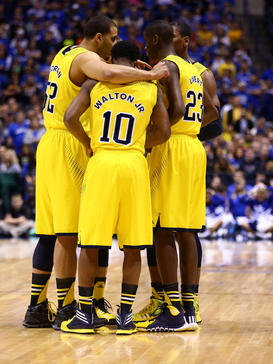 Is 2014-15 Michigan on the track to repeat the Hoosiers' struggles?

John Beilein entered Ann Arbor after one of the darkest periods in Michigan basketball history.  When Beilein arrived on campus, Michigan had missed the NCAA Tournament for 8 straight seasons and had finished 7th or worse in the Big Ten in the three preceding seasons.  Clearly, there was work to do.  Beilein was able to knock off the Buckeyes in his first season at Michigan to start 1-1, but struggled for the next three seasons.  Entering 2011-12, Michigan had just a 2-8 record under Beilein against Ohio State.

However, the Wolverines have had the upper hand in recent meetings.  Michigan not only swept the Buckeyes during the 2013-14 season, but they won the final meeting between the two in the 2012-13 season, giving Michigan 3 in a row.  Add in the final regular season meeting of the 2011-12 season and it gives Michigan 4 out of the last 6 over their arch-rivals.  Though Michigan still has some work to do to "even things out," they have been able to put together a few good seasons.

What's even more significant about Michigan's recent run is that both teams have been good.  This has not been a case of Michigan beating up on terrible OSU teams.  Since 2011-12, OSU has made the Final Four, made the Elite Eight twice, won the Big Ten, won the Big Ten Tournament, and made the NCAA Tournament three times.  Even in 2013-14 - easily the weakest of the last three years for OSU - the Buckeyes started 15-0, won 25 games during the season, finished #5 in the Big Ten, and were a #6 seed in the NCAA Tournament.  For most teams, that's a pretty good year, which shows that Michigan has put this run together despite facing good Buckeye squads.

It's difficult to compare recruiting between teams because of the vast differences in styles, programs, and rosters.  While Michigan is largely regarded as an offensively driven team, Ohio State is largely regarded as a defensively driven team.  Though neither label is 100% true, it means we can't put each team's recruits next to each other and expect to find a conclusion.  Each team recruits different players with different skillsets at different times.

Despite the issues, let's at least take a look at how things have been going for each program.  One thing to note is that I'm going to use the 2013-2015 recruiting classes.  With today's quick turnover in rosters, it's just too problematic to go much further.  Here is the breakdown between the programs:

In terms of recruiting, Ohio State definitely has the advantage over the 2013 to 2015 classes, at least according to 247Sports.  However, there are a few things worth acknowledging about this comparison.  First, Michigan's 2014 class consisted of many late commitments due to several players leaving for the NBA or transferring.  Late additions are always a touchy subject because they're usually pretty hard to predict.  Just look at Spike Albrecht and Caris LeVert, who were both late additions, but have been pretty productive for Michigan.  Plus, nobody is quite sure whether Austin Hatch will play long term in the 2014 class, so that's a bit of a wildcard.

The other thing to consider is that Michigan's 2015 class is completely empty right now.  OSU has been recruiting at a blistering pace in 2015, but it's still early.  Michigan's class is not going to be empty, so we really don't know how things are going to shake out there.  As of now, I'm assuming that OSU will probably have the better class, but Michigan is in on some top end guys like Jalen Brunson and Jalen Coleman, so don't count them out yet.  Still, it's hard not to give OSU the edge in recruiting.

Once again, Michigan and Ohio State will square off twice in the regular season - as should happen every year, but this may be one of the toughest year's to predict in recent memory.  Usually, projecting next year's rivalry games centers around what each team brings to the table and where the games are located.  This year, both teams host a home game and the honest truth is that we don't really know what each team is bringing to the table. 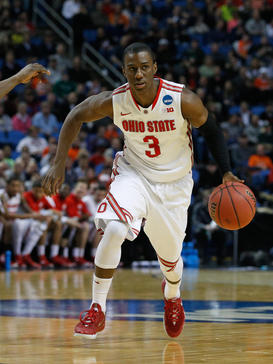 What could next season mean for the Buckeyes?

Each squad has some proven players and some major question marks.  Michigan brings back Caris LeVert and Derrick Walton, but are looking for bench players like Zak Irvin to step up and players with no experience like Kameron Chatman and Mark Donnal to make an impact.  Ohio State likewise brings back Shannon Scott and Amir Williams, but are likely going to have to rely on players like Keita Bates-Diop and D'Angelo Russell to make early impacts.  Without knowing how the newcomers will perform, it's a tough thing to project.

Just look at BTP's Memorial Day Power Rankings.  Ohio State was ranked #2 and Michigan was ranked #3.  The Buckeyes averaged 1 spot higher in the votes, but the teams are slated to be very close.  On paper, Ohio State looks to be the better incoming team next year.  They have key returners and the better incoming recruiting class.  Even from a Michigan perspective, OSU's class looks very good.  Michigan actually recruited Keita Bates-Diop and Jae'Sean Tate for quite some time, so "evaluations" shouldn't be an issue here.

Of course, there are reasons to buy Michigan's hype as well.  LeVert looks like a serious All-American contender and Walton is continuing Michigan's recent run of really good point guards.  Add in Irvin - who played well off the bench last year - and you have 3 really good looking starters.  If Mark Donnal can be productive, Michigan might not drop-off as far as some think, especially given that Kameron Chatman and DJ Wilson - Michigan's highest rated 2014 recruits - both could play the last remaining open spot.

The games in 2014-15 are likely going to be highly competitive and continue the great recent run of Michigan - Ohio State games.  The Buckeyes might take a small edge in this category, at least in incoming talent, but my bet is that the teams are going to be pretty close next season.  A split to the season series is probably what I expect to see.

Last summer, I ranked the Top 5 worst single-play games of the Big Ten schedule.  Due to the Big Ten's expanding nature and limited number of regular season games, there are always a few regular season conference games that only occur once.  The game that I ranked #1 was Michigan vs. Ohio State.  This infuriated many, as they believed Indiana vs. Purdue deserved the top spot.  My reasoning in support of Michigan vs. Ohio State was largely due to the rivalry's competitive nature and nationally prominent teams.  With another season in the books, I feel even more confident in that selection.

The fact is that this rivalry is in more than just good shape.  In fact, outside of possibly the early 1990s, this may be the best period of this rivalry of all-time.  Just take a look at the general factors.  First, as detailed above, both teams are very good and both programs look to remain at the top level.  Rivalries are always fun, but just look at IU-PU from last season.  Neither team was all that great and it took a lot of the excitement away from arguably the Big Ten's best overall rivalry.  These are two elite level teams battling it out.  Even if they weren't rivals, these would be really exciting basketball games.  Just take a look at how the teams have stacked up recently according to KenPom:

On top of that, the series has been competitive recently.  Yes, Michigan just swept OSU and yes, OSU had a dominant streak before 2011, but this series has really been competitive for 4 seasons.  Over the last 3 years, Michigan leads 4-3 and the 2010-11 season really signaled the restart of the rivalry.  OSU's 3-0 record against Michigan that year doesn't scream competitiveness, but those games were actually a lot closer than some think and as I have written about before, the 2010-11 OSU team was absolutely loaded.  The fact that Michigan was even in those games says a lot.

If I had to select one of the teams as "winning" the rivalry at this very second, I think I would have to lean Michigan simply because they've done more on the court recently and are in pretty good shape to at least be competitive again next year.  Ohio State has been recruiting better so far, but that's almost entirely linked to the 2014 class as explained above.  Maybe that class can overcome some of the other advantages Michigan has had going, but I think the advantages of that class might be a bit overblown by some.  Having said that, I wouldn't be surprised to see that balance change by time Big Ten season starts next year.  As the Buckeyes look to rebound from a "down" year, I think we are going to see more of the great games we have been able to witness over the past few seasons and add to what is already a red hot rivalry.

-----
Thomas Beindit is Manager & Editor-in-Chief of BTPowerhouse and Contributor at Wolverine247. You can follow @tbeindit on Twitter for Big Ten basketball updates.