The Cornhuskers have a coveted recruit on campus this weekend. Can they make a big impression?

Glynn Watson, a 5'11" point guard out of Westchester, IL and ranked #68 overall in the 2015 247Sports Composite Index, is on the road this weekend as seen in his below tweet: 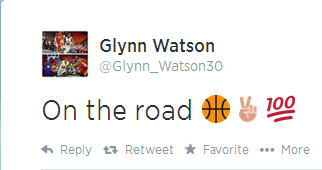 Where is he headed on the road you ask? That would be Lincoln, Nebraska to visit the Nebraska Cornhuskers.  The Crystal Ball predictions on 247Sports.com have Nebraska as the favorite to land Watson right now at 60% while Marquette has the other 40%. Other recruiting websites have the Top 3 as Nebraska, Creighton, and Purdue. One school is the common denominator here - and that is Nebraska. Getting him on campus for an unofficial visit this weekend is a big deal for a program looking to capitalize on one of its most successful seasons in a long time. If the Cornhuskers can start to land players ranked in the Top 100 on a consistent basis - this could truly be a program on the rise in the B1G.

Here is a recent video on Watson in action at the Jayhawk Invitational:

As you can see, he appears to be a great facilitator of the basketball and also has the capability to knock down shots which is an added dimension that not all point guards in today's game have. He recently had a game winning shot in the second overtime as part of the Run-N-Slam tournament which shows he can also be a clutch shooter. Most programs would love to have a guy like this and that is why the likes of Marquette, Iowa, Creighton, and Purdue have offered a scholarship along with Nebraska. Will he commit to the Cornhuskers this weekend? Probably not, but getting him on campus could go a long way in eventually getting this coveted commitment.