After a heck of a year, let's see where the best coaches in the Big Ten stand.

The 2013-2014 Big Ten basketball season was full of surprises. We saw the rise of Nebrasketball, the fall of Indiana, and a trip to the Final Four for the Badgers. At the front of all this wackiness has been the coaches. Some are beloved amongst their community, but others are dead men walking. But let's take this time to honor greatness: here's the top 5 best coaches in the Big Ten for next season.

Nobody saw this coming, but Nebraska became a legit contender in the Big Ten last year. Looking forward to next year, they look even stronger. They're losing no real contributors, and have an entire other year for the combination of Shavon Shields and Terran Petteway to develop. But this success wouldn't exist without Tim Miles.

Miles has provided an incredible amount of stability to the Nebraska program by attracting transfers like Petteway, and allowing them to contribute immediately. That stability gave the Huskers tons of success in big spots last season. The one that sticks out is their win at home against Wisconsin. That was a must-win for their tournament hopes, and expectations were high. It was probably the biggest game in recent history for Nebraska, and Miles did a fantastic job keeping his players poised and focused. They administered a clinical attack on the Badgers, and locked up their spot in the NCAA Tournament.

Next season will be very interesting for Nebraska. Obviously, they're not a powerhouse, but they won't be the underdog that they once were. Can Miles keep the team focused and improve from their first-round exit? I think he can, but even if they do, that won't shake up the rest of the top 4 coaches to come. 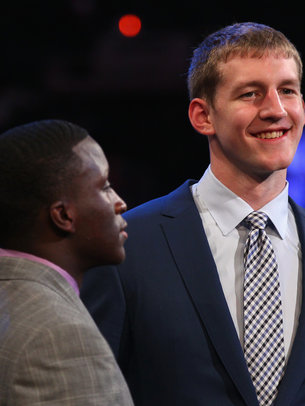 These next 4 won't surprise anybody, but their ranking can vary depending on the year. Thad Matta has had some great tournament success, but because of how great other teams have been in the Big Ten, I have to rank him 4th.

The Aaron Craft era finally came to an end with OSU's first-round upset by Dayton. Last year's team had high expectations, but never found success in the tournament. Not only will the Buckeyes lose Craft, but also lose Lenzelle Smith, Jr. and LaQuinton Ross. That's a lot of talent and leadership to lose, but if any coach can adapt, it's Matta.

Matta has transitioned seamlessly from era to era. He went from Oden-Conley to Turner-Sullinger to Thomas-Craft without a hitch. Next year, the Buckeyes have an absurd amount of incoming talent. D'Angelo Russell, Keita Bates-Diop, and Jae'Sean Tate all have star potential, and will see some solid minutes in their freshman campaigns. Expect them to burst onto the national scene pretty soon under the tutelage of Matta.

If this were last year, Beilien would be at #2, but I have to go with the most recent Final Four appearance. Beilein is still an excellent coach who can develop talent like none other.

He turned Trey Burke from a 3-star recruit into the National Player of the Year. He helped Nik Stauskas transition from being a strict 3-point shooter to a future NBA lottery pick. And if next season, Caris LeVert becomes a star, It will be impossible to deny the coaching abilities of Beilein. He has a unique eye for talent that he can mold into his system, and LeVert seems to be the next logical star to blossom. LeVert demonstrated flashes of that potential last season, but he'll have the team to himself with the losses of Stauskas, Mitch McGary, and Glenn Robinson III.

While next year may seem a bit scary for Michigan fans, I have full confidence in Beilein's ability to get the most out of his teams. When LeVert becomes a star, someone else will become the next man up for Beilein to develop. There's no telling who that will be, but Beilein will find his man.

With Wisconsin's Final Four appearance, you can't tell Bo Ryan nothin'. For his whole career, the one knock has been that he can't do anything in the tournament. Those critiques are null and void now, and Ryan has the chance to further cement his place as one of college basketball's best coaches next season.

The Badgers will be in the top 5 of most preseason rankings, and will be a nice mix of experience and explosivity (that's a word now). So many current Badgers have come quite a long way since the beginning of last season. Traevon Jackson entered this season as someone of an enigma/nightmare at point guard, but became poised and smooth by the end of the year. Frank Kaminsky was a nobody outside of Madison, but will be on the short list for the Naismith award.

Next year will be huge for Ryan, but even today, you can't deny that he's one of the best coaches in the B1G, if not the country.

No matter how many great coaches are in this conference, the number 1 spot belongs to those with a title. As of today, that's just ol' Tommy Izzo.

Coach Izzo finally failed to meet his guarantee that if you stay for 4 years at MSU, you'll reach a Final Four. That's an absurd accomplishment, and it's amazing that he's been able to come anywhere close to that. No other coach has had the historical consistency and success throughout the years. Next year will demonstrate the greatness of Izzo. They're losing the crux of their team, but I don't expect them to fall back too much. That just doesn't happen with Izzo at the helm. Come March, no one will want to play an Izzo-coached team, no matter their talent.

What do you think? Am I totally wrong? Let us know in the comments.