Texas Shooting Guard Austin Grandstaff will become a Buckeye in 2015.

During a recruiting visit to Ohio State's campus on Sunday, May 4, Buckeye head coach Thad Matta received an oral commitment from Class of 2015 4-Star shooting guard Austin Grandstaff. Grandstaff had originally committed to Oklahoma State, but announced his intentions to reopen his recruitment in February of this year.

I have Committed to THE Ohio State University #BuckeyeNation

The 6-foot-5, 190 pound guard is viewed as one of the top junior prospects in the nation. Grandstaff is ranked as the No. 5 shooting guard and the No. 36 prospect nationally in the Class of 2015. 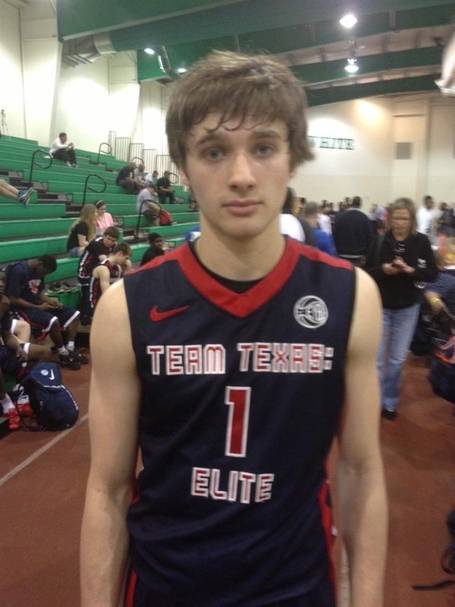 Grandstaff is a member of Nike's Team Texas Elite, who play on the EYBL circuit (Photo Credit: 247Sports)

Matta believes Grandstaff will be able to contribute to Ohio State's most pressing need right away: scoring. The 17-year-old Texas native averaged 27.1 points, 6.9 rebounds and 3.1 assists this season for Rockwall High School.

Grandstaff shows exceptional shooting range, which should help spread the floor on any offense he plays within. He had a 51-point explosion earlier this season in which he showcased not only his prolific jumper, but also his burgeoning dribble-drive acumen.

Grandstaff is expected to be used as more of an off-ball guard, using screens and motion sets to pop open for jumpers. However, Grandstaff has shown the ability to play some point guard during his time at Rockwall. Should he continue that playmaking development during his senior season it stands to reason that Grandstand could be used as a point guard in certain situations. However, his primary function as a Buckeye will be to put points on the board.