The Gophers will have a huge senior class playing in 2014-15, giving them a chance to make the big dance and ramp up Rich Pitino's program.

Share All sharing options for: 2014-2015 Minnesota: Pitino Needs To Win

Minnesota surprised some people in 2013-14, Rich Pitino's first season. They won eight conference games and went on to win the NIT. They performed above expectations, but it was still looked like a rebuilding program transitioning under a new coach. Next season will bring Pitino the opportunity to really bolster his program to another level.

The Gophers only lost one big piece, guard Austin Hollins, at the end of the season, and his leadership will be severely missed. Guards Malik Smith and Maverick Ahanmisi also finished their senior season. Although they weren't big scorers or vital pieces to Pitino's system, Ahanmisi and Smith averaged a combined 28.6 minutes per game.

The biggest question for Minnesota in 2014-15 is who steps up to fill those minutes in the backcourt. Seniors Deandre Mathieu and Andre Hollins will certainly start in the first two guard spots. The next most experienced guard on the roster is Daequan McNeil, who played just 9.7 minutes and scored 1.6 points per game in his freshman season.

Pitino could try to fill the third guard spot with Joey King. He's experienced, played well down the stretch last season and has a good shooting stroke. It's rather unlikely he play the three though. Pitino wants to maintain the fast pace and outrun his opponents. King can't get up and down the floor like a true guard can, or even most small forwards for that matter.

Rich Pitino put together an interesting recruiting class, with two large centers and another junior college transfer, but it does not include an simple solution to the lack of depth at guard. Nate Mason, a three-star point guard from Florida, certainly has potential, but Pitino is already playing two point guards in Mathieu and Hollins. He can't fill the third guard spot, so Mason will see solid play time backing up Hollins and Mathieu. 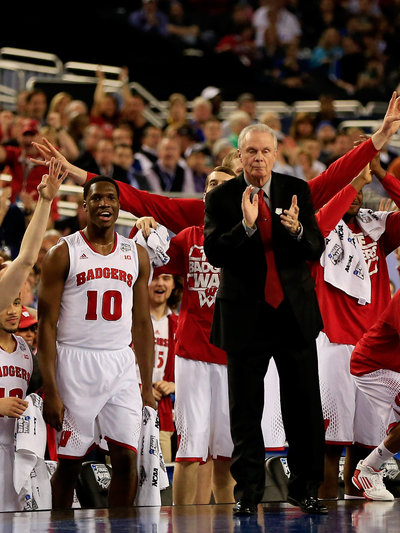 Transfers have already proven useful to Pitino in Minnesota (Smith and Mathieu), so it's likely Carlos Morris quickly moves his way into the starting lineup. The junior college transfer had offers from Arkansas, Cincinnati, UAB and Seton Hall, and possesses a deadly jumper. Morris, a 6'5" shooting guard, fits Pitino's system perfectly and can help this Gopher squad right away.

Minnesota will have one of the oldest lineups in college basketball next season. Hollins and Mathieu will both be seniors, as will centers Maurice Walker and Elliott Eliason. Morris and King will both be juniors. In an age where college basketball is dominated by talented freshman, the Gophers will need to take advantage of their experience and play smart basketball.

The Gophers can go deep in 2014-15. They have a talented and veteran starting five. They gelled quickly last season and proved they can play in Pitino's up-tempo system. Hollins and Mathieu are going to run some opponents off the floor, and Mo Walker showed he can be a bully in the post. If Pitino finds some competent guards to use off the bench and King plays strong at power forward, there's no reason Minnesota can't make the NCAA tourney.

This a big year for Pitino. All the pieces are there for him to win. He is going to lose a huge senior class at the end of 2014-15 and could go through a short downturn in the following seasons. If Pitino is to build his program swiftly and attract some big-time recruits, Minnesota has to at least make the big dance in 2014-15.