After a down year, Illinois looks to become relevant again in the Big Ten race.

Share All sharing options for: Illinois - How Important Is 2014-15 To The Program?

John Groce is now entering his most pivotal season as the head coach of the Fighting Illini.  The grace period for the head coach is now over and he will start feeling heat quickly if he doesn't return results.

In year one, Groce got the benefit of a great group of returning players.  Not only could they score in bunches, they were able to quickly adapt to Groce's different style of play.  The 12-13 team achieved an NCAA tournament bid and came very close to knocking off Miami enroute to the Sweet 16.  Illinois has a tough fan base to please, but Groce seemed to appease everyone with the results of his first year.

The off season after year one brought about many changes to the Illini roster.  Four seniors graduated who combined for 39.83 out of the 68.47 points the team averaged per game.  Illinois also lost four bench players to transfer, that combined for 4.68 points per game.  Groce quickly had to find a way to replace 65% of the team's scoring.  To do this, he added five freshman and three transfers.  Rayvonte Rice also became eligible after sitting out a year under the NCAA transfer rule.   The team started the year playing great, but a bad January losing streak caused the team to miss the NCAA tournament.

Year three has started out rough, with Darius Paul being dismissed from the team for disciplinary reasons.  Illinois now adds only two newly eligible transfers in Aaron Cosby and Amhad Starks as well as two freshman.  Cosby and Starks add much needed three point shooting and can both play the point when needed.  Leron Black, Mr. Basketball from the state of Tennessee, is the most talented player Coach Groce has recruited, and should be a force down low.  Michael Finke is the other freshman and is a wild card at this point.  He was a great three point shooter in high school, and has recently grown another inch, which puts him up to 6'10".  His size and shooting ability draws comparison to the big men Wisconsin has won so many games with over Bo Ryan's tenure.  For the first time under Coach Groce, Illinois seems to have the caliber of athlete it will need to compete in the top half of the Big Ten.

Kendrick Nunn Could Be A Special Player For Illinois 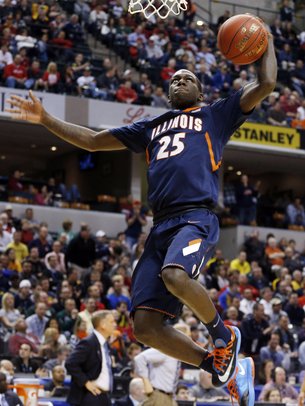 One of the star freshmen in the Big Ten last year was Kendrick Nunn. How good can he be this season?

Illinois has fought for top recruits in the past and for the most part, has struggled to land the top talent.  Being in a recruit's final three and having your hat on the table is great, but sooner or later, you need to get picked.  The problem for Illinois is that since they lost the National Championship game in 2005, they have been all but irrelevant.  They made the tournament a few times since then, but never made any big noise.  Recruits today want to either go to a blue blood, or go to a school that is considered cool.  Unfortunately for Illinois, it is far from being considered cool.  They hope to get there by updating the State Farm Center and revamping their uniforms.  But the most important trait prospects look for in a school, is being a winner.  Winning in the tournament and fighting for conference championships should be a routine occurrence if you really want to tap into that top talent.  How they perform this season will directly affect if they can get any of the top four and five star talent that they are after.

This season will define John Groce either for better or worse.  Either the Illini play great and Groce brings in talent reminiscent of the Conley/Oden class at Ohio State, or they lose and may start to see the downside of Groce's career at Illinois.

The biggest prize, the thing that every coach, player, and team strives for, is to win a national title.  Illinois does not have the talent currently to win a title.  You need to have five star, "one and done" talent, and right now Illinois does not have it.  Illinois needs to win and win a lot.  They need to prove they can steal some top talent from around the country and maybe, for once, keep a top in state player from going to a blue blood.  To win a national title, you need five star players.  To get five star players, you need to win.  Now it is up to Illinois in a pivotal season to show that they can win the games they need to win, to move the program towards a national title.