Maryland is coming off of yet another very disappointing season and is also going through a very difficult off-season so far. The Terrapins have already seen the following transfer this off-season: Seth Allen, Nick Faust, Shaq Cleare, and Roddy Peters. Allen's departure is the most shocking as he was the second leading scorer on the team and only a sophomore who was really coming into his own. After three straight seasons of missed NCAA tournaments, Coach Mark Turgeon has to be on the hot seat in a big way as are several other B1G coaches. Luckily for Turgeon, he has a tremendous recruiting class getting ready to join him in College Park. Every position is covered in this class and the Terrapins also had a huge (literally) late find as well. With every  player ranked in the Top 130, Maryland has a chance to rebound next year from the disappointment of the first three seasons under Coach Turgeon. 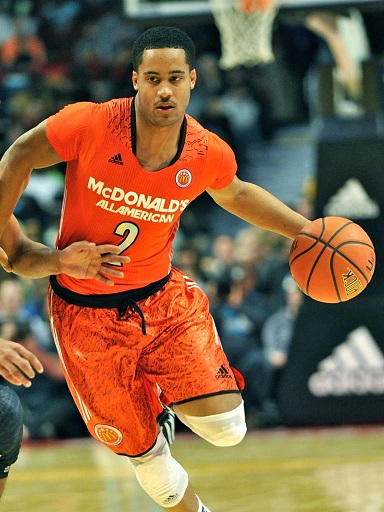 Trimble was named a McDonald's All American, and you can clearly see why in this video. He appears effortless in taking guys off the dribble and finishing at the hoop which is a lost art form today. He also appears to have a pretty good shot which could make him a deadly player for the rest of the B1G to play with. He averaged 23 points per game this season and scored a career high 47 in a game as well. With Seth Allen now out of the picture, it would appear the PG spot is Trimble's to lose. He doesn't seem to be a very flashy player, but does appear to make pretty good decisions and could be an on the court leader very early in his career at Maryland. If he does win the starting PG spot, a lot will be asked of him early, but he should be able to handle it. He recently played in the Kentucky Derby Festival Basketball Classic and had quite the all-around game with 9 points, 8 rebounds, and 7 assists. That is the type of play Maryland will be looking for in the coming years. 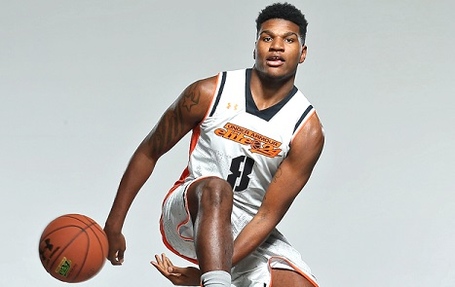 Wiley could be the most affected in a positive way by all the transfers that have occurred this offseason. He clearly is a talented player and especially appears to have a good shot which can't really be taught. However, he likely wouldn't have seen a ton of minutes if the transfers hadn't occurred - especially Seth Allen. Now Wiley will be in the spotlight pretty early on and it will be interesting to see how he handles that. The B1G is a tough conference to play in as an upper classmen, not to mention a freshman. He recently played in the Derby Classic along with fellow recruits Trimble and Nickens. He had 7 points on 2 of 5 shooting to go along with 2 boards and 1 assist. Nothing special, but certainly not bad either. He should be a very solid player for the Terrapins for a number of years. 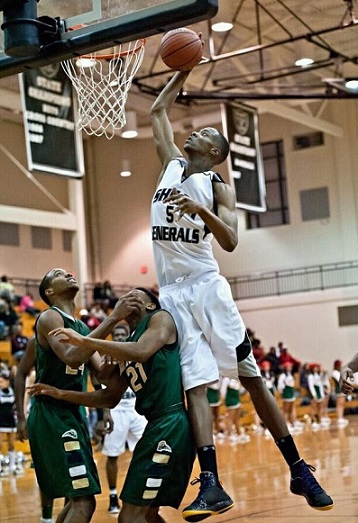 Reed shows some pretty good skills in this video and you certainly can't teach his 7'1" size. The B1G is really lacking in big men going into next year and there are several teams in the B1G that would kill for a player of Reed's size and potential skill. He is very long which clearly helps him on the defensive end as he seems to protect the rim pretty well. I would question his offensive skills a bit as he doesn't seem to have a whole lot of post moves at this point, but that is somewhat normal for college big men today - at least early on. He is clearly not going to come in and be an all-league player right away, but he has a ton of potential to become that down the road. And with the lack of big men in the conference as a whole next season, Reed has a chance to put up some pretty good statistics depending on the minutes he ends up playing. 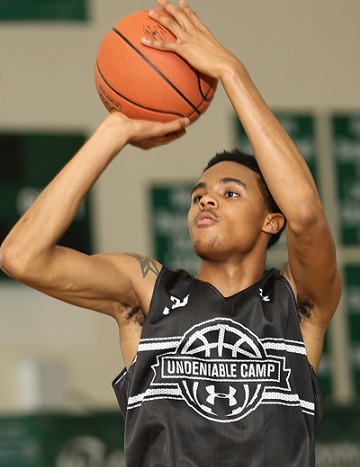 Everyone knows what Nickens is coming in to do at Maryland - shoot the basketball from deep. As you can see in the video and any other video you watch of him, he can flat out shoot the ball from anywhere. Nickens also recently played in the Derby Classic and true to form went 2 of 3 from the three point line to finish with 6 points, 1 rebound, and 2 assists. Players like Jared don't really need to do a whole lot more than consistently make the three point shot to have a significant role on the team. Yes, he will have to prove he can play some defense and be able to handle the ball from time to time, but when you shoot this well - you will always have a spot in the rotation for the most part. With all the upheaval this offseason, Nickens should have a chance to compete for some solid minutes - especially if he can prove he has more game than just the three point shot. 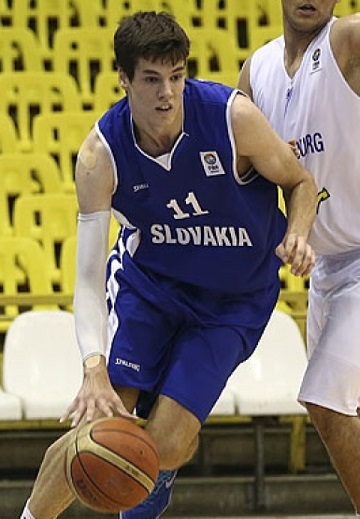 Cekovsky was one of the huge steals of the late recruiting period for the 2014 class. While he is ranked #127 overall in the composite index - it is mostly driven by a few services not knowing a whole lot about him as an international player. 247Sports actually puts him at #36 overall which is right behind Trimble (a McDonalds All American). If anyone had any doubt - just look at the offers. Arizona and Louisville don't offer just anyone and Kansas certainly doesn't show interest in just anyone. Cekovsky is very talented. He can shoot the ball as well as put it on the floor and score at the hoop. He also plays very good fundamental defense which is normal for European players. Schools like Indiana would have killed to get this guy late in the game at 7 feet tall. The International recruiting scene is a bit different than in the States in that it is much more secret as to who is looking at who, so it is likely there was significant interest from other schools as well. It wouldn't surprise me at all if Cekovsky is playing significant minutes next year for the Terrapins and playing very well in those minutes.

State of Recruiting from Pete at Testudo Times:

Maryland's 2014 recruiting class has widely been ranked in the top ten of the nation, and with good reason. They've got the numbers (five commits), the positional spread (one at each position) and the top-end talent (all are ranked in the top 130 of the 247sports composite, with four in the top 100) to justify the praise.

The star of the class is point-guard Melo Trimble, who was the All-Met player of the year last season at Bishop O'Connell and is expected to start at point guard from Day One in College Park. Late addition Michal Cekovsky, a Slovakian prospect, is also expected to compete for a starting job at center (he's seven-foot tall, although his game is more that of a power forward), while shooting guard Dion Wiley, small forward Jared Nickens and center Trayvon Reed will likely play smaller roles in the rotation.

Out of those three, Wiley is the most likely to see some serious playing time in Maryland's first season in the Big Ten. He's a strong scorer at the two, and Maryland will need all the help they can get in their backcourt, with three of four outgoing transfers coming from there. Nickens is a spot-up shooter who could come off the bench to spark some offense, while Reed is a project who helps provide immediate length.

With all the offseason transfers occurring at Maryland - could there be something brewing behind the scenes? Probably not, but you don't often see 4 transfers in one offseason including your second leading scorer. Clearly something was going on inside the locker room which was not beneficial for the team. The question now is whether it is the problem players transferring out or if the problem players are left on the team. That is what Terrapin fans will be focused on early in the 2014-2015 season.

No need to hide who is next since there is only one team left. The Ohio State University has taken the top spot in BTP's Recruiting Class Countdown. There is not much doubt in this one as OSU has one of the best classes in the entire country which should help the Buckeye's continue their extreme recent success next season.