2014 Could Be A Historic Draft Year For The Big Ten

Share All sharing options for: 2014 Could Be A Historic Draft Year For The Big Ten

Of course, college games are not won or lost in the NBA Draft.  Just look at Kentucky recently.  They have easily been the most dominant program in the NBA Draft over the last few years, but that also includes a year when they went to the NIT.  Kentucky has been a great program recently, but for the amount of talent they're putting into the NBA, the picks would imply they would have several national titles.  That's a debate and story for another day, but the point is that the NBA Draft does not automatically equate to wins.

Still though, fans not only like to see talent going to the next level, but recruits also like to see it.  Putting players into the NBA Draft can be the difference between landing a big prospect or missing him.  With the Big Ten's recent rise on the court, there has also been a rise in the conference's NBA Draft performance.  Just look at the Big Ten's 2013 NBA Draft class.  Not only did the conference have 5 players drafted, but 4 of them were selected in the 1st Round.  Victor Oladipo, Trey Burke, and Tim Hardaway, Jr. also all ended up in the Top 5 for NBA Rookie of the Year voting.

Though the Big Ten has had some solid drafts over the last few years, 2014 could be a special year for the Big Ten.  Of course, the conference had a ton of success during the college basketball season with 3 Elite Eight teams and 6 teams in the NCAA Tournament, but Draft night might even treat the conference better.

In order to get a better grasp on how the Big Ten was looking for Draft night, I went to several different sites and checked out where they had the Big Ten prospects going.  The sites used here were CBSSports, DraftExpress, NBADraft.net, NBA Draft Room, and MyNBADraft.com.

What I did was take those 5 mock drafts, compare their selections, and then charted where they had the Big Ten prospects going in the draft.  Here is what I found: 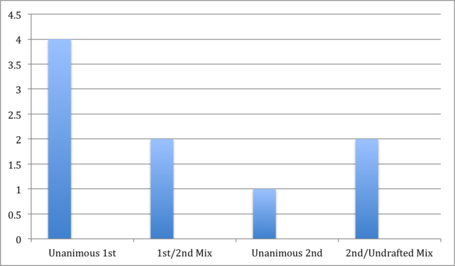 There are a few things to take from this chart.  First, if you have any faith in the mock drafts, the Big Ten looks extremely likely to have 4 players selected in the 1st Round.  Those guys were listed in the 1st Round on all 5 sites and as far as I have seen, are listed on every other site as well.  However, it's the 1st/2nd Mix category that could really change the perception of the Big Ten in the Draft.  If Mitch McGary and Glenn Robinson III could slide into the 1st Round or even have one guy move up, this could be an incredible year for the Big Ten.  Having Keith Appling and Roy Devyn Marble move up from the 2nd/Undrafted Mix would also be nice, but the impact would not be as significant as the one that could come from McGary and GR3. 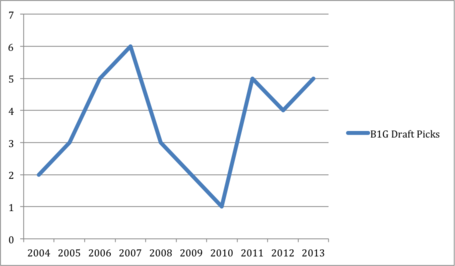 There are a few things from this chart that merit discussion.  First, that 2007 remains the peak year for the Big Ten in the NBA Draft, at least since 2004.  That year featured a total of 6 selections from the Big Ten.  It's also worth noting that there has been a pretty significant rise since 2010 for the conference.  In fact, the conference has been able to have 14 players selected over the last 3 seasons, which is pretty impressive.

According to the mock drafts used above, the Big Ten has a solid chance at surpassing that 2007 NBA Draft.  On every mock draft, 7 Big Ten prospects were selected in 2014, which would be higher than the total number in 2007.  In fact, if there were 7 prospects selected, it would be the most since the 2000 NBA Draft, where 8 players were selected.  What could add even more is that Appling and Marble could also get drafted, which could potentially bring the total to 9 draftees, which would be the most by the Big Ten in the 2000s. 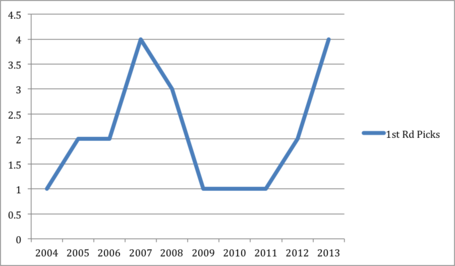 Though it's a relatively safe bet that this year's Draft class will be the best since 2000, there's also a decent chance that the Draft class is better than the 2000 class.  First, there's the chance that Appling and Marble could move into the Draft field.  If only one of them are drafted, that would tie the 2000 numbers, but if both were drafted, the 2014 class would have more selections than the 2000 class.  However, if either McGary or GR3 moves into the 1st Round, it would give the 2014 more 1st Round selections than 2000, which would be far more significant.  1st Round selections are far more likely to last in the NBA and indicate the strength of the field.  The Big Ten would have to catch some breaks, but if one of these scenarios could occur, or some combination, this could be the best Draft class since probably the early 1990s, which is pretty incredible.

Overall, this year's Big Ten Draft class is not guaranteed to be the best, but it is in strong position to be the conference's best Draft class since at least 2000.  Along with this, if the Big Ten can get at least a little luck, it might be even as good as that 2000 class or better.  Depending on how you view that, it may either be incredibly impressive or not so much, but it's important to remember that 13 NBA Drafts have occurred since that 2000 Draft.  Even being the best since then is pretty darn impressive.  Add in possibly another decade and this could be a very special year for the Big Ten in the NBA Draft.