Did The Big Ten Underachieve In The NCAA Tournament?

Share All sharing options for: Did The Big Ten Underachieve In The NCAA Tournament?

At the end of the day, we all know the media is going to run with those numbers and many around the country will use it to argue that other conferences deserve more respect than the Big Ten. We have already seen ESPN and the media try to jump on the SEC this year with 2 teams in the Final Four. Sure, they only got 3 teams in the NCAA Tournament and 1 was a play-in team, but they won games in March, which is what matters to many people. The Big Ten had plenty of success for itself, but without those key wins late, can they really argue they are the best?

The answer is mixed. No person can actually sit here and argue that the Final Four and National Championship Game don't matter. Those are without a doubt the biggest games. Flawed or not, those games just mean more. We all know these games are almost always close and are decided by a bucket or two, but they're played on a national stage with so much on the line. The Big Ten's struggles on this stage are not going to be soon forgotten.

However, we can't realistically pin an entire conference on the result of 1-2 games per year. As much as some people may forget, the Big Ten has 12 teams, not just Wisconsin. The Badgers may have had the most success in the NCAA Tournament this year, but that doesn't mean they are the only Big Ten team that matters. The same can be said for Kentucky and UConn. Both have had great runs to the title game, but the American and SEC don't suddenly all become national title game participants because they happen to be in the same conference. A conference is composed of all the teams, not just the top team.

The question here is whether the Big Ten met expectations for the NCAA Tournament. Regardless of what anyone says, the Big Ten had a good postseason. Along with their NCAA Tournament success, Minnesota won the NIT and Illinois and Penn State both at least made the 2nd Rounds of their tournaments. Add that to a solid NCAA Tournament performance and things look really good. However, this article is about the NCAA Tournament, so let's stay focused on those numbers. Here's a quick rundown of how things went for the Big Ten: 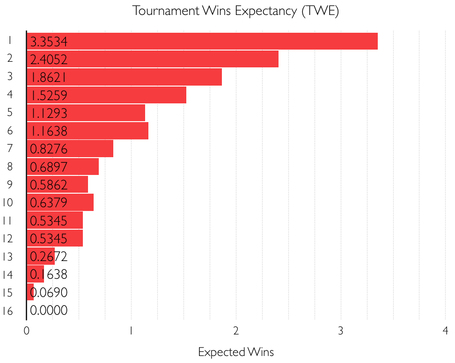 To no surprise, as you tend to get higher, you tend to have higher expectations. It's pretty simple really. You typically get an easier path and are a better team if you're seeded higher. You should go farther. So how about the Big Ten? Let's take a look at each team's expected wins and total results:

The chart is pretty convincing. In terms of expected wins, the Big Ten easily outperformed expectations. The biggest performers were Michigan State and Wisconsin. The Spartans were probably underseeded and their performance went a long way in adding to the Big Ten's performance. Still though, even if MSU went out 1st round, the Big Ten would have almost met expectations. That's a pretty strong statement.

The biggest thing that people have forgotten is that 3 of the Big Ten's NCAA Tournament teams were very lowly seeded. In fact, Iowa was a play-in game and Nebraska was in the Round of 64, but as a #11 seed. People ripped on the Big Ten for these teams losing, but is that really fair? The biggest contribution both of these teams made to the conference was getting into the big dance. That alone is a boost to the Big Ten's reputation.

The moral of the story here is don't buy into the Big Ten underperformed narrative. Could the Big Ten have been better? Absolutely. Teams like Iowa and Ohio State could have easily pushed the conference to 12 actual wins instead of 10 and quelled much of this discussion. There's no Big Ten team playing on Monday night, but the conference has more than represented itself in the NCAA Tournament for another great year.