As we get to the last days of the Big Ten regular season, we will be posting our Big Ten Tournament projections a little more frequently. Not as much may change, but with 5(!!!) ties in the conference standings, it's pretty easy to say that the race is tight. A single win over the weekend could move teams up pretty significantly. With that, let's look at today's Big Ten Bracket:; 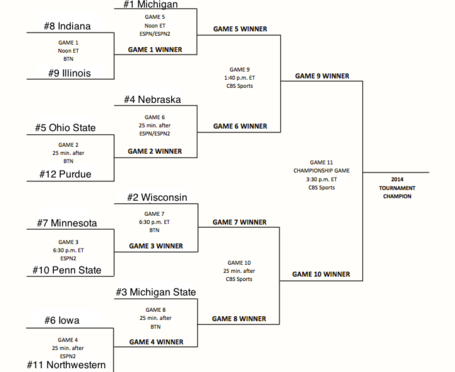 The top 3 positions maintained as neither team has played since Friday. Â Wisconsin faces Nebraska today and MSU faces OSU today. Â Here are your scenarios for the #2 seed:

Further down, the #4 seed remains open. Â The big weekend development was Iowa going down at home against Illinois. Â This locked Iowa out of receiving the #4 seed. Â The Hawkeyes owned virtually every tiebreaker, so that's actually a pretty big development. Â Now, there are two teams left and here are the scenarios for the #4 seed:

- Nebraska Clinches With:
- Ohio State Clinches With:
The #2 and #4 seeds are the biggest things left to be determined in the Big Ten Tournament seeding, but there are still a few interesting races for seeding down the line. Â Iowa and OSU both have the potential to lock up the #5 seed. Â Along with this, the #8, #9, and #10 seeds are all open depending on if Penn State wins due to tiebreakers. Â However, the #8 and #9 game is a lock. Â It's basically about who will be the "higher" seeded team. Â At the bottom, the Purdue and Northwestern game will decide who are #11 and #12.