Rutgers and Minnesota. Minnesota and Rutgers. Scarlet Knights and Golden Gophers. I'm struggling to find two schools that will share a conference with less in common than Rutgers and Minnesota. Piscataway, New Jersey and the Twins Cities, Minnesota. By my cursory research, the two schools have never faced each other in any sport. I wonder how many people in history have even been to both campuses. Will Philip Nelson be he first ever? He should write a memoirs.

Anyway, on to the basketball recruiting.

Rutgers is the first B1G new-comer to show up on this countdown. Of the two new schools to the conference, it is certainly the one with the lesser basketball tradition. The Scarlet Knights have only been to six NCAA tournaments in their history, with the last coming in 1991. Their last winning season was in 2005-2006 and their last 20-win season came a decade ago. Rutger's has, as weird as it sounds, been to a Final Four: in 1976, after a 31-0 regular season and led by now-coach "Fast" Eddie Jordan. Jordan, I think I can safely say, will be the only B1G basketball coach to have also coached in an NBA All-Star game (I did no research on this statement). Rutgers basketball is probably most famous for the player abuse/harassment scandal under recently fired coach Mike Rice. 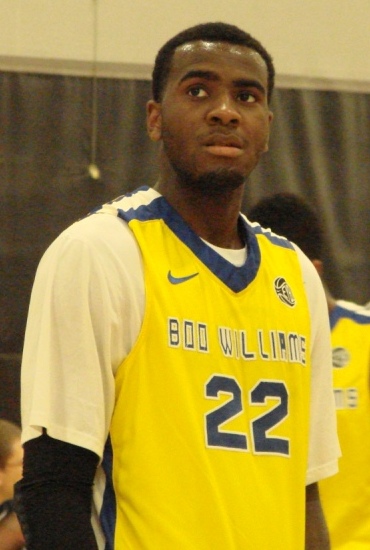 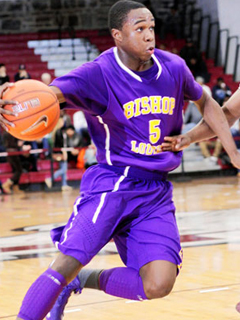 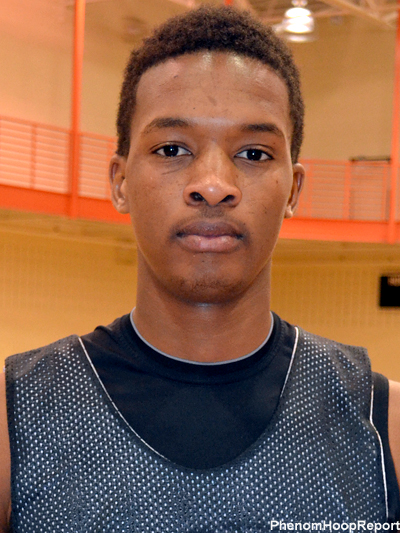 So, Foreman seems like a pretty decent athlete, eh? The tape showed lots of dunks, blocks and pretty nice finishes around the basket. There were a handful of jump shots as well, but his release looks very strange and I'm going to assume that's not going to be his bread and butter in college. This is Wally Judge's final season at Rutgers, and Foreman looks like a good replacement in the front court.

Here's a new one...an actual game! Williams, playing for Bishop Loughlin in purple (he's #5), faces off as a junior against NYC high school star and current Fordham Ram Jon Severe (what a name!) and Christ the King in the an inter-borough championship game. His jump shot is picture perfect. Quick release, good elevation, everything you're looking for in a shooting guard. Williams also has a nice pass to a man under the basket in the highlights.

Not really much to see in this 51 second clip, also the title has Diallo in the class of 2015, which obviously isn't correct. He's a big, strong center who can rebound and block shots. You can tell, even in that brief video, that his footwork needs a lot of work. I'm not sure how he figures into Coach Jordan's plans for next season, but I hope not a lot because he doesn't seem super skilled. He does have some nice bounce for a big-guy.

State of Recruiting from David White of On the Banks

Eddie Jordan did yeoman's work putting a roster on the floor this year after the Mike Rice scandal.  At the same time he was focused on the 2014 and 2015 classes.  Rutgers did well drawing in some Top 150 recruits in Mike Williams and Dwayne Foreman.  Those two along with Diallo and Daniels should form a nice foundation to build on.
Jordan and company are still out there recruiting even though there are without an open scholarship.  The team is looking at Point Guard Matt Farrell, Center Adonis Delarosa and Guard Jamall Gregory.  Speculation says someone on the team will transfer or leave the program.
But the 2015 class is where Jordan needs to hit a home run.  He has 6 scholarships to give and 2 verbal commitments already.  He's landed two small forwards in Top 150 player Leroy Butts and sleeper recruit Austin Burnette.  Both are supposed to be heady players who make the right pass and can hit the jumper.
With the other four scholarships, Jordan is casting a wide net.  But the crown jewel is scoring point guard Isaiah Briscoe.  This Top 20 player is a Jersey boy and apparently interested in what Jordan is selling.  He would fit in Jordan's offense perfectly and could be the pied piper recruit this program has craved for 20 plus years.

Rutgers is going to probably be way over it's head, at least at first, in B1G basketball...and....well...just keep playing that saxophone, friend.

Like their football program, the heyday of Minnesota basketball came largely in the first half of the 20th century, with national titles in 1902, 1903 and 1919. The Golden Gophers won the B1G and went to the Final Four in 1997, led by coach Clem Haskins and star Bobby Jackson, but an academic scandal in 1999 would see the NCAA retroactively strip the school of their accomplishment. More recently Minnesota has made the NCAA tournament in 2005, 2009, 2010 and 2013, the last three under coach Tubby Smith. Smith was fired after the 2013 season, because, well, I'm not exactly sure. You don't see a coach coming off an NCAA tournament appearance for a program like Minnesota get fired all that often. It seems that the ends justified the means, though, as they brought in Richard Pitino, son of Hall of Famer Rick Pitino, who has the team squarely on The Bubble. 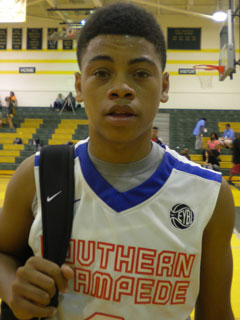 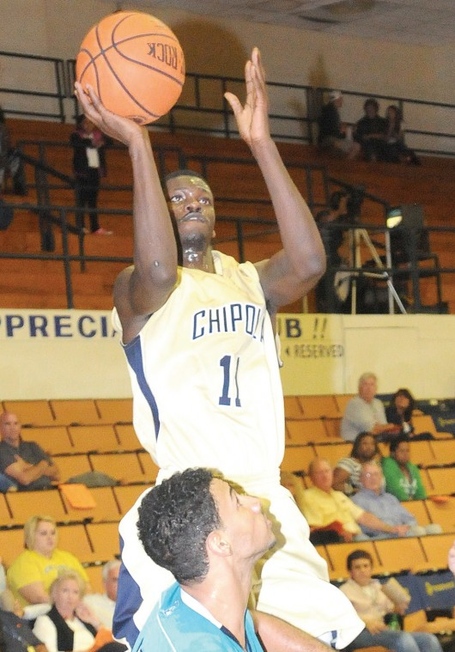 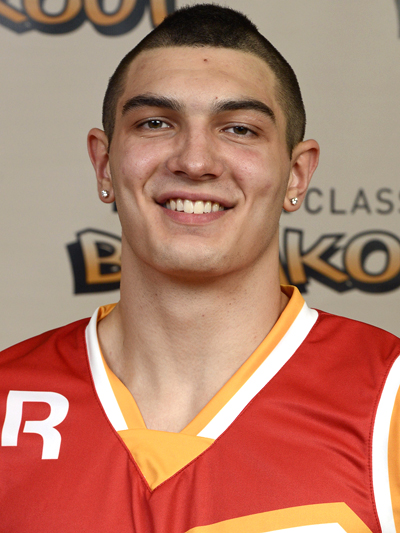 This mixtape is about a year old, but I picked it because of the sweet graphics. Mason seems like one of those high school guards that don't jump off the court athletically and are on the shorter side, so they fly under the radar of recruiting services. His game seems effortless, which is not to say he isn't trying, he's just smooth and clinical with his movement. The outside shot is definitely there, although I've seen other film where his stroke looks different, more compact, so maybe he's been tinkering with it recently. I hope that coaches at Minnesota will urge him to attack the basket because he has really nice handles and appears able to finish in traffic.

Junior College players are tricky to evaluate. On one hand, if the player has maturity or attitude issues, going somewhere that they are the best player and they feel like they have to show-out for a D1 offer could augment the problems. On the other hand, the experience could be humbling and with coaches and teammates around them that understand their situation it might be the best thing for them. I don't know anything about Morris's personality, but his game is college ready. Chipola is one of the best JUCO programs in the country, with at least five former highly recruited high school players. Morris should come to Minnesota next season and immediately be one of the best players on the team. He has a deadly jumper, great passing instincts and plenty of athleticism.

Looks like we've found our first big time dunker in the countdown. "The Hulk" (great nickname) can certainly throw it down and has arms that go to his feet, but there's a reason a guy with that much athleticism is barely a top 250 recruit. The first red flag is that a good half of the three minute video of highlights were from warm-up dunks. Don't get me wrong, I love an athletic, jumping-bean power forward, but this is a great example of how mixtapes can be deceiving. Martin seems very, very, very raw. There are a few jump shots in the film, but I can't imagine he'll be doing much of that, at least at first, at Minnesota. He also seems very slow getting up and down the court for a guy with that level of athleticism.

State of Recruiting from Tom of The Daily Gopher

For the 2014 recruiting class there had been months and months of discussion about the "big three" recruits coming out of Minnesota.  For a program like the Gophers, when you have a trio of top-50 talent in your back yard you need to be able to keep them.  Unfortunately for Richard Pitino he was brought into the game too late and he missed out on Tyus Jones, Rashad Vaughn and Reid Travis.  So the staff quickly moved on.

In the short amount of time that Pitino has been leading the Gopher program two prominent recruiting themes have emerged.  Early on in recruiting for the class of 2014 Pitino and staff were very active and eager to land a high-caliber, high-profile player or two.  They were a part of the final decision on 4-star guys like Tum Tum Nairn, Ja'Quan Newton and Wade Baldwin.  And they ended up a likely second place on Travis and SG-Isaiah Whitehead.  The new Gopher staff was working their East Coast AAU ties to get into the living rooms of these kids but in the end just didn't have enough to land them.  I expect in year two of recruiting we will see them pursue big names yet again and maybe with a season under his belt in the Big Ten more kids will give Minnesota serious consideration.
Secondly the staff clearly was working hard to improve the athleticism, quickness and speed of the current Gopher roster.  As they implement the style of play that they want to employ, it is imperative that they have guys at their disposal with better length and the ability to play at a faster pace.  PG-Nate Mason is coming into the program next year and will be a player similar to current PG-Deandre Mathieu but with three or four inches and likely a better shooter.  PF-Josh Martin has a Big Ten ready body but is also very athletic at a position the Gophers desperately need to improve.  And SG-Carlos Morris is a JUCO kid who will replace the lanky Austin Hollins on the perimeter as a guy who can shoot and should be a good defender.  All three are very athletic and quick giving the staff more speed on the floor to implement what they want to do both offensively and defensively.
Ultimately Pitino and staff are trying to implement a system that is predicated on athleticism and quickness.  My concern has been that there are not a lot of kids out there who both possess elite athleticism AND also have a developed skill set.  Then you have to out-recruit other programs and get these kids to come to Minnesota.  This will be his biggest recruiting challenge.  In the early years I believe Pitino will have to identify kids who have great athleticism and then develop their skills (shooting, ball-handling, etc) or hope they are late bloomers.  Overall I like the direction of the program and I am anxious to see how Pitino's second full year of recruiting goes compared to his first.  With five juniors on the roster the staff will have at least 5 scholarships to work with for the 2015 recruiting class, next year is where he'll have an opportunity to make a big impact.

When you're a school in a state like Minnesota, where there generally is not a ton of local talent and it can be difficult to recruit nationally, and there's a year like this with three big-time players in the state, it is incredibly disappointing to miss out on all of them. Using the 247 Sports Class Calculator, had the Gophers signed all three of the local stars (Jones, Vaughn and Travis) they would have had a class score of 51.65, which would have been the 3rd ranked class in the country (behind Duke and Kentucky, ahead of UNC and Arizona). They ended up with some good talent, but fans have to be wondering, "What could have been?"

Team #8 is generally known as a basketball school but frustrated hoops fans are probably reminiscing about football success during a disappointing season on the hardwood. They'll be fine, they always are.

Team #7 has been in the news recently, but for something that happened nine years ago. Another team just passed their mark for wins without losing in a college basketball season.