What is going on at Indiana? - NBA Draft, Transfers, And More

Now that Black Monday is over in Bloomington - let's take a look back and try to figure out what is going on at Indiana.

Share All sharing options for: What is going on at Indiana? - NBA Draft, Transfers, And More

The Indiana Hoosiers started the season with 18 players (13 scholarship players and 5 walk-ons) and were one of the youngest teams in the B1G Conference and the country for that matter. Everyone knew it would be a rebuilding year of sorts, but things really looked bright for the future. Most expected Noah Vonleh would stay at least two years given he was one of the youngest players in the entire class. When he left? Well Luke Fischer would be there and be well developed by his junior season. Jeremy Hollowell was supposed to have a breakout season in a starting role after his strong finish last year. All these plans didn't exactly work out well though. In fact, they kind of went like this:

The falling beam has become the symbol of the 2013-2014 Hoosier season. The Hoosiers did not even make the NIT this year. Not making the NCAA is unacceptable to Hoosier fans. Not making the NIT? That is a fireable offense. The early offseason for Indiana fans hasn't gotten any better. Noah Vonleh announced he is going to the NBA which didn't shock too many people after the tremendous season he had as a true freshman. Once he showed he could shoot from the outside, it was a no brainer that he would be gone. What many didn't see coming was this, courtesy of @ChronicHoosier: 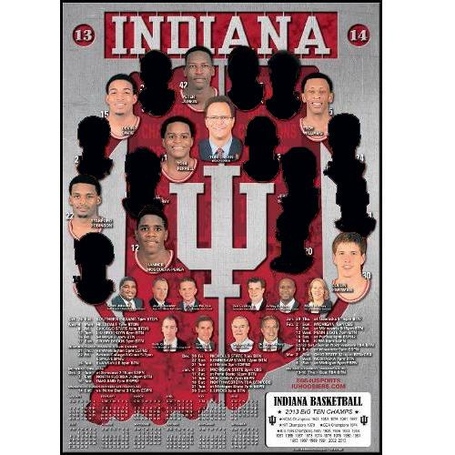 Yes, four of these players were seniors and were going to be gone regardless (Sheehey, Gordon, Howard, and Wayer). However, the other seven weren't exactly planned. Luke Fischer transferred during Christmas Break so that he could be closer to home. This set alarm bells off for many Hoosier fans as they knew by this point there was a good chance Vonleh was going to be a one and done. As the season went on, it also became clear that Jeremy Hollowell was going to transfer. He was suspended for three games due to "focus" issues and never really regained a major role on the team after that. The real surprise so far has been Austin Etherington. He started several games down the stretch and was seen by many as a Hoosier through and through. In many ways, he was the one that brought Cody Zeller to Hoosier Nation. He is transferring to find more playing time which is fine, but still unsettling for many Indiana fans. Is there a culture problem in the program again? When someone like Etherington transfers - you have to sit back and wonder.

To add more fuel to the fire of there being a culture problem - every single remaining walk on (Jonny Marlin, Joe Fagan, and Andrew Calomeris) has also left the program this week. In Fagan's case - he is going to at least remain at Indiana, but just stop playing basketball. These are guys that likely aren't going to have much of a chance anywhere else either (maybe with the exception of Marlin). You are playing basketball at Indiana University - why would you ever give that up? Maybe that is just a crazy fan's perspective though. Or maybe it really does show a major problem internally in the program. There are still rumors flying around about Hanner Mosquera-Perea and Stanford Robinson's future as well. If the Hoosiers lose both of them, they will be down to five returning players - one of which just tore his ACL (Hartman) and one of which has all kinds of medical issues keeping him off the court (Jurkin). If there is a culture problem - maybe it is good that the house will be cleaned. However, the rabid Indiana fans are not going to put up with the rebuilding excuse again. This wasn't a problem inherited from another coach like the beginning of Crean's tenure. This is a self-created problem by apparently not mixing and matching the personalities and talents well enough on the current roster.

The Hoosiers are involved with fifth year transfer 6'9" Anthony Lee of Temple along with schools like Louisville and Ohio State. The one thing Indiana has going for it is a major hole in the middle which means Lee would come in and have all the playing time he could ever ask for. Coach Crean has also offered two freshman forwards in 6'7" Josh Cunningham out of Chicago and 6'8" Yante Maten out of Michigan. The Hoosiers are considered among the leaders for all three of these big men which would really help balance the roster out next year and make Indiana fans forget March 24, 2014 - or what I am referring to as - Black Monday.