#9 Illinois is set to take on #8 Indiana in the Opening Round of the Big Ten Tournament, Thursday, March 13. 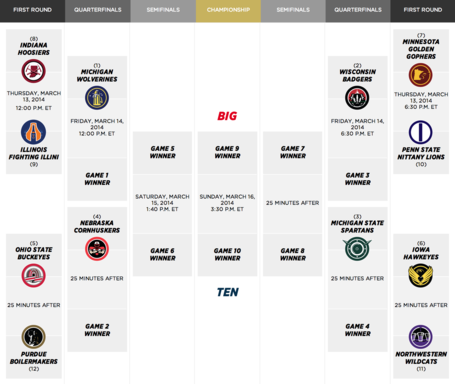 Even though Illinois did not play on Sunday, they still came out losers. John Groce and his boys looked on as Minnesota throttled Penn State, in the process dropping the Illini to the #9 seed. The Golden Gopher's win is the difference between the Illini facing Indiana and Michigan (combined 22-14 in B1G play) or Penn State and Wisconsin (combined 18-17 in B1G play) in the first two rounds. There are no easy roads in the B1G tournament, but you won't find any teams overly anxious to trade places with the Illini.

Let's be honest here, history is not on the Illini's side. A #9 seed has ever won the B1G tournament, and only three times has a 9-seed or lower even made it to the championship game: #9 Iowa in 2002, #10 Illinois in 2008 and #11 Illinois in 1999 (Maybe the underdog factor plays in Champaign?). Only one team that has had to play all four days of the tournament has ever won the championship - 6-seed Iowa in 2001 (they had some luck, as both 1-seed Illinois and 2-seed Michigan State were upset in the second round) . Even for college athletes, playing four blood, sweat and tears filled basketball games in four days takes its toll. If Illinois is going to pull off a tournament win from the 9-spot, they are more than likely going to need some help (i.e. upsets) along the way. Hopefully John Groce isn't much of a history buff.

Road to the Championship:

3/13 Opening Rd. versus #8 Indiana: The season series was split, with each team holding serve at home. Both games were close - Illinois won the first in an overtime thriller; a month later the Hoosier's took revenge in a 10-point, closer-than-the-final-score-indicates contest. I expect no less this time around. At the heart of this matchup is the ongoing - and just plain fun to watch - duel between Rayvonte Rice and Yogi Ferrell. In the two-game series Rice averaged 24.5 points, 6.0 rebounds and 3.0 three-point makes, while Ferrell threw up an equally impressive line of 23.5 points, 4.5 assists and 3.0 three-point makes. These two seem to bring the best out in each other, and if they hope to win, the Illini certainly need Rice to be at his best here. If both stars are on just sit back and enjoy the fireworks, it'll be HBO Sunday night programming (on a Thursday night) good.

3/14 Quarterfinals versus #1 Michigan: The first game these two teams played was not a pretty one, at least for those garbed in orange. It was a 22-point game at the half, a 31-point game when the final buzzer rang and a thorough dismantling of the Illini the whole way through. That 84-53 Wolverine win will no doubt be fresh in the minds of both teams, as it occurred only ten days prior to their potential matchup. It's safe to say Michigan won't be nearly as hot as they were that day, when they knocked down 16 of 23 (!!!) three-point attempts. I don't believe John Beilein is banking on that kind of performance again, even if his Wolverines are one of the best three-point shooting teams in the nation. On the other hand, I wouldn't count on the Illini struggling that badly on the defensive end again. Still, this would be a huge upset by the Illini any way you slice it. The Sagarin Ratings hold Michigan as nearly nine point favorites in this potential matchup. If the Illini are lapse in their defensive rotations and fail to generate turnovers that nine-point line might look way too generous by the time the game is over.

3/15 Semifinals: If the Illini can survive the first two days in Indianapolis, they will be looking at a matchup with either 4-seed Nebraska, 5-seed Ohio State or 12-seed Purdue for the right to play in the B1G Championship game. Chances are slim-to-none the Boilermakers get to this point (Purdue did beat Illinois way back on January 15, but that was a very different Illini team in the midst of an eight-game losing streak). The Illini split their season series with Nebraska and were swept by Ohio State. The Cornhuskers can stake a claim to being the hottest team in the B1G, with only one loss - encouragingly enough coming at the hands of Illinois - in their last nine games. Ohio State has run hot and cold all season, but with an emotional win over Michigan State to close out the season the Buckeyes are a team no one wants to see when they start rolling. A matchup with the Buckeyes might be preferable, as they would be on their third game in three days as well. The teams might struggle to break the 45 point barrier, but that's the kind of game John Groce can dig.

A Tale of Three Seasons:

The Illini, along with everyone else in Champaign, Ill., seem to have put that whole eight-game losing streak - a stretch of misery brutally endured by the Illini and their fans from January 8 to February 9 - behind them. This is a confident Illinois squad, riding high after recent road wins against Michigan State and Iowa. They may be confident, but can they be consistent? The Illini have had as streaky a season as one will ever see. They started the season 13-2, lost 10 of their next 11 and recouped to go 4-1 over their last five games. Which one of those teams will show up in Indianapolis? If the Illini are looking to make a run they need to control the pace of the game and they need to force and capitalize on turnovers. Turnover opportunities are key for a team as offensively challenged as this one. Illinois is 10-4 in games in which they force 13+ turnovers, and just 8-9 in games they do not. Offensively, ball movement is critical. Illinois is 13-4 when they dish out 10+ assists. When the ball stops, so do the wins - Illinois is 5-9 when recording fewer than 10 dimes. Making a run in the gauntlet that is the B1G Tournament is no easy task, especially for teams like Illinois who have very little room for error. If Groce can keep his team engaged, they have a fighter's chance at winning some games. 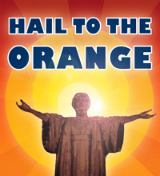 Will anyone be hailing to the orange in Indy?

As of right now the Illini look locked into a solid NIT tournament seed. A few tournament wins could go a long way as far as seeding is concerned. After starting the season 13-2 with a top 25 ranking this certainly isn't the endgame Illini fans had in mind, but after enduring that horrible stretch of play in January and February this turns out being a nice salvage job by John Groce and his team. A run to the B1G Championship game is highly unlikely - as I said earlier, history is most certainly not on their side - but I don't expect the Illini to cordially bow out without a fight. Look for Groce's team to grit it out in an attempt to pull some upsets -- with the way this season has been in the B1G anything is in play.