As we wind towards the close of the Big Ten regular season, the big news that typically arises regards potential lineups and brackets for the postseason. Almost all of these are directed toward the NCAA Tournament, but what about the Big Ten Tournament? This year's bracket should be even more unpredictable than last year and with several teams on the bubble, it could have major implications. With that in mind, let's take a look: 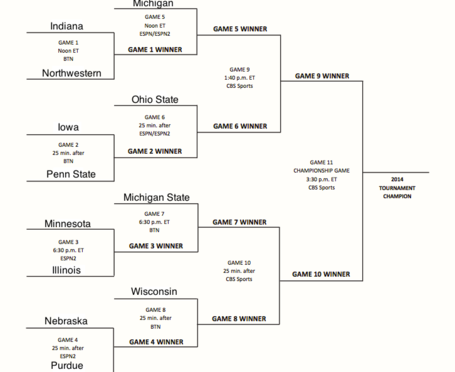 The first thing to stress about this projection is that it's just that, a projection. The standings are incredibly close from top to bottom and on top of that, there are several ties in the standings. This projection could look a lot different even by the end of the night, with Iowa potentially moving up to the #4 spot with a win over Indiana. This is a moving target just like any normal bracket projection.

Perhaps the most intriguing thing is Iowa being slated #5. They certainly have more than enough time to move up, but it's pretty crazy to think that they would be the 5th best team in the conference considering where they were when the non-conference season ended. Still, it's more than possible. Along with this, it is interesting to see Northwestern slid that far in the seeding, which may sound unusual, but they had some great play in Big Ten play for awhile.

The most exciting potential matchup of this bracket has to be Michigan vs. Ohio State. The Buckeyes have to be dying for another shot at Michigan after losing earlier this year and they are in great position to get it. Along with this, another Iowa vs. OSU showdown would be fantastic. Both of those games were great this year. On the other side, a rematch of that great MSU vs. Wisconsin game is enticing, but Minnesota and Nebraska will both be battling on the bubble, offering even more entertaining games.

Every game on this bracket has some sort of storyline, which is a sign that the 2014 Big Ten Tournament just might be the best one in its history.