Before we get started with the first installment of our B1G Giant Countdown, I'd like to introduce myself, as this is my first piece for BTPowerhouse. My name is Andrew and I am a Maryland graduate living in Washington D.C., so I'm new to your strange, corn-and-brat-fed world. Until now I've been contributing solely to Testudo Times, but I'll be taking over as a writer and manager for the recruiting coverage here.

Over the next few weeks I'll be breaking down and ranking every 2014 recruiting class in the conference, two at a time. The format you see below will be the basic format for every post, but as a new-comer here I would love to hear feedback in the comments about what you think I could change, take away, add...really anything.

Side Note: As I write this I am watching Mark Harmon on my TV as I wait for hockey to come on, so I feel like I'm in a pretty B1G state of mind.

Until their relative success this season, Nebraska has rarely been known as a basketball school. The Cornhuskers have only six NCAA tournament appearances in their history, the last coming in 1998. They're led by Texas Tech transfer, junior forward Terran Petteway (17.7 PPG, 5.2 RPG) and should return most of their key contributors for the 2014-2015 season. The only senior is shooting guard Ray Gallegos (7.5 PPG). 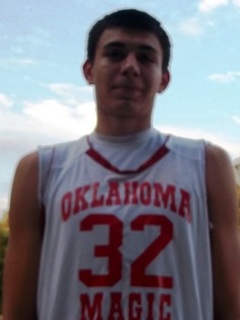 The most recent video I was able to find was from 2012, so his sophomore year highlights. A player can and should change quite a bit in two years, but this is the best we got so let's take a look.

In reading about Hammond's game, the first thing he emphasized was his defense. Obviously in a highlight video we aren't going to see much one-on-one post defense or any defensive mistakes. You can see that he has solid instincts while blocking shots. He's able to time his jump with the offensive player which results in a bunch of stuffs right in their face, before they are even able to get the ball out of their hand. Again, this is just a highlight video, so these could be the only blocks he had all season, but I'm going to assume that's not the case.

The two most impressive elements of Hammond's offense are his turnaround jumper and proclivity to go right up with the ball when collecting it under the basket. So many big men, even those much further along in their development than a sophomore in high school, tend to bring the ball down to their hip before trying to go back up, resulting in strips, blocks and overall unnecessary motion. Hammond uses his height to his advantage and doesn't bring the ball below his shoulder if he doesn't have to.

On the negative side, he's certainly not an overwhelming athlete. If he was out there jammin' on Oklahoman high schoolers, we would have seen it in the video.

State of Recruiting from David McGee of Corn Nation

As of right now, the Huskers have only signed one guy, Jacob Hammond, a 6' 10" C from Comanche, Oklahoma. He's a Rivals top 150 player and, get this, he's the FIRST ever top 150 player to sign with Nebraska. EVER. E.V.E.R. That gives you a glimpse into the state of affairs of talent acquisition at Nebraska. He's been putting up some pretty impressive numbers, which you'd expect from a top 150 player. He's a skilled scorer and a very good rebounder at a position of desperate need for the Huskers.
They're still in search of talent. They're hot on the trail of JUCO PG Trey Dickerson, F Deng Deng and PF Willie Atwood. Atwood and Dickerson are friends and there has been a lot of twitter chatter about them wanting to play together in college. Dickerson is tentatively planning to visit on March 9 vs. Wisconsin, which has a chance to be the biggest home game at Nebraska in at least 15 years. It could be a wild atmosphere that should be impressive atmosphere...unless they piss it down their leg which, if history is any indicator, that's the most likely scenario.
A senior transfer is also a possibility. They only have one senior, Ray Gallegos. But they only had 12 on scholarship to begin the season and with Deverell Biggs leaving mid-year they've got three scholarships to give. I think they'd like to grab Dickerson and one of the other two at least. Right now, they just need talent, especially in the post, but talent across the board is needed.
Honestly, recruiting doesn't get a ton of attention around here. It's difficult to track who they've missed out on. JoJo Anderson and Jonah Bolden are the big names they missed out on. Anderson went to Creighton, Bolden signed with UCLA.
For 2015, they've received a commitment from Keanu Pinder, a SF from Australia who'd playing at Sunrise Christian in Wichita. They're in on several other players that could really highly sought after kids, but we'll see how things go there. It will be interesting to see if they continue their resurgence through the end of the season if that has any impact on some of these kids they're in on.

You got the highest rated recruit in your history (even if he's just a 3-star)! So, celebrate Nebrasketball fans...just, like, don't go crazy.

From a historical bottom-feeder to a semi-juggernaut. Wisconsin has made the NCAA tournament 15 straight seasons and will assuredly extend that streak this year. Under Bo Ryan the Badgers have never finished lower than 4th in the Big Ten. Although they have never cracked the Final Four, Ryan's run has been remarkable. With only one scholarship opening for the 2014-2015 season, and already having a very good team, the class of 2014 will not be asked to make a significant impact right away. 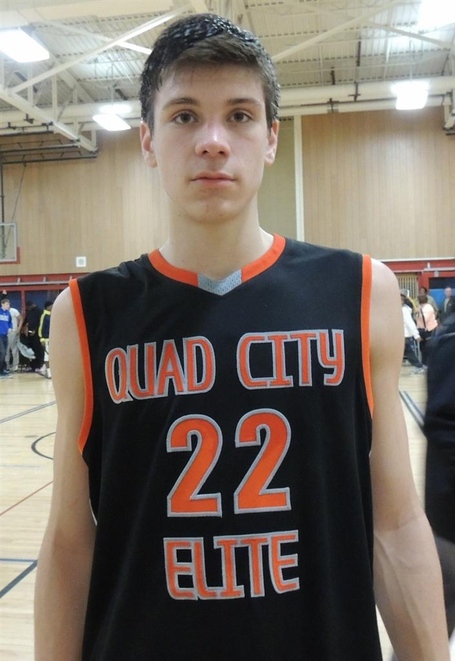 Note: Don't worry about the lack of offers. When a player commits so early in the process other programs tend to back off unless he is a perceived blue-chipper or improves by leaps and bounds, like Anthony Davis growing 8 inches in two years.

I did come away impressed with is passing ability. For a bigger guy that is obviously one of the best player on his team, he looks willing to dish off to someone with a better shot at scoring. He even showed off some flash with no-look and behind the back passes.

Overall, Happ seems like the perfect Wisconsin basketball player as long as he either gets a buzz-cut or grows fantastic curls. He'll probably play sparingly in his first few years then be All-B1G as a junior. Bo Ryan is a wizard.

State of Recruiting from Phil Mitten of Bucky's 5th Quarter

Anytime a school signs only one scholarship player in a recruiting class, like Wisconsin did in 2012 when Sam Dekker arrived, the excitement level is tempered. Due to a flurry of redshirts in the 2010 class, the Badgers had only one opening for most of the 2014 cycle and hope to have struck oil again with Ethan Happ from Rockridge (Ill.) High School. The 6'8" Happ is yet another well-rounded, skilled forward who will play a big role in UW's future.

Touted as "the next Dekker" by some around the time of his commitment almost two years ago, Happ has added weight to his frame and will come in with more strength, toughness and rebounding acumen than Dekker, which has helped those unfair comparisons fade away. Happ has a nice handle and has developed into a Mr. Basketball candidate in Illinois despite playing for one of the smallest schools.

Next season, the Badgers will have four experienced forwards returning from this year's rotation, so there is no real need for Happ to step in right away and contribute as a freshman. With that said, Happ is going to be a welcome addition in Madison. I'm in the camp that rating a recruiting class if pretty worthless until about Year 3, but if forced to grade Wisconsin's one-man class, I'd give it a B. Assistants Greg Gard and Lamont Paris do most of the heavy lifting these days, but give Gary Close credit this time around.

Overall, the program does a solid, if unspectacular, job of recruiting. I think the mindset of fans is "not satisfied, but understanding." Bo Ryan and his staff have always put together classes better than they appear on paper due to snagging underrated recruits like Happ. Despite what looked like a couple of reaches in the 2013 class, it appears Nigel Hayes and Bronson Koenig could both be stars, which coupled with an opportunity for a stacked 2015 class has optimism running high for the near future.

The big one that got away in 2014 was Milwaukee's Kevon Looney. Though deep down I knew Looney was a longshot, Ryan and the staff worked their butts like never before. The Badgers went toe-to-toe with Duke until the bitter end, when the in-state superstar surprised everyone by picking UCLA over five other finalists. Looney and Happ together may have been somewhat redundant, but you cannot ignore a Top 15 talent in your backyard. Wisconsin did recruit other big-time forwards for 2014 to help solidify its future front court. I'm convinced Abdul Malik Abu would have been another Hayes-like wrecking ball; he opted for N.C. State.

Hypothetically, if guard George Marshall had transferred before this season rather than at the semester and Looney had cut UW loose sooner, there's a decent chance the Badgers would have added Bryan Alberts, a combo guard from Los Angeles -- to this class. Instead, without any certainty of an available scholarship, Alberts signed with Gonzaga.

In the next recruiting cycle, Wisconsin needs a bit of everything, but will again focus on bringing in more size. Specifically a true center. In a stroke of serendipity, the 2015 class includes a pair of potential centerpiece big men within the state's borders. Diamond Stone (No. 5 overall) and Henry Ellenson (No. 48) have both been heavily courted for several years now. Getting either one would be great; missing both would be disappointing despite some decent backup options. In all, the coaching staff has six total scholarships to work with, but has not handed out many offers yet. I do expect Bo Ryan to pick up his next point guard in this 2015 too -- Minnesota's Jarvis Johnson has gotten the most attention so far. Guys like Brandon Hutton, Roosevelt Smart and Josh Sharma are also on the Badgers' radar.

You could just look it up, but it's more fun to guess.

Team #12 is currently ranked and in the top 20 and top 4 of the B1G. They have one player in the NBA, who happened to be traded today (February 19th).

Team #11 is in the middle of a very mediocre season and have only made the NCAA tournament once in the last 13 seasons. They last had an alum play in the NBA in 2002. That former player became much more notable in 2007 for a revelation about his private life.