Share All sharing options for: BTPowerhouse's Week 6 Big Ten Power Rankings - There Is A New #2 In Town

The last week was a significant one for the Big Ten, but unfortunately, the conference came up short and failed to convert on what had the potential to be a statement weekend.  Teams like Illinois, Maryland, and Penn State scored some big victories, but other teams like Michigan, Michigan State, and Ohio State came up small.  Now, with non-conference play coming to a close in the near future, the rankings are getting closer than ever and the conference continues to try and score some big victories.  As of Monday morning, the Big Ten had an overall record of 117-41.

The Badgers rolled were off last week and as a result, faced no significant challenge to their unanimous #1 ranking from last week.  They will get challenged with Buffalo and California this week.

The Terrapins continue their impressive rise and move into #2 on the power rankings this week.  Before the season, many were talking about a rough year for Maryland, but they continue to improve and score some big wins.  As of now, they might be the most serious challenger to Wisconsin this season.

Classic at a Crossroads? 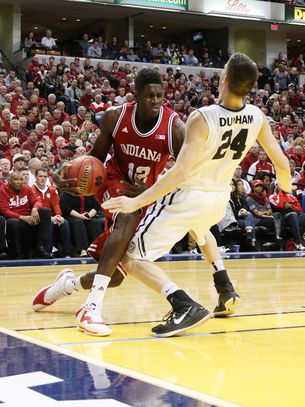 BTPowerhouse takes a look at what the future may have in store for one of the top non-con events for the Big Ten.

The Buckeyes slipped to #3 this week after losing to North Carolina in Chicago.  Ohio State has yet to score a marquee victory and will likely have to wait until conference play to change that.  They do get an alright Wright State team this weekend, which could help their resume.

The Hoosiers are another team on the rise after scoring a win over Butler in the Crossroads Classic last weekend.  Indiana has been a bit inconsistent, especially on the defensive end of the floor, but they have put together a pretty solid non-conference resume and will be a real challenge to beat in Big Ten play.

The Illini come in at #5 this week after winning the Braggin' Rights game against Missouri last weekend.  Illinois has a few solid wins in non-conference play and could be a major threat if young players like Kendrick Nunn can hit their stride in the first few games of Big Ten play.

The Gophers are quietly proving to be one of the better teams in the Big Ten this season and although they have not played any challenge teams in their last few games, this is still a quality unit that will be very dangerous in conference play.  A lot will come down to playmakers like Nate Mason and Deandre Mathieu.

The Spartans took a nose dive this week after suffering their worst loss of the season at home against Texas Southern last weekend.  Michigan State will have to continue to play through the injury of star forward Brendan Dawson, but that was a huge hit to this team's resume.  They will have to work to rebound over the next few weeks.

The Hawkeyes lost another disappointing game to an in-state team this week.  Iowa seemed to be in good position against UNI, but the wheels fell off in the 2nd Half and they could not keep pace.  Iowa gets North Florida before opening up Big Ten play on the road.

The Nittany Lions have not necessarily looked impressive over the last few weeks, but they just keep winning and moving up the rankings.  This week, they are sitting at 11-1 with a pretty good shot at moving to 12-1 with Dartmouth looking ahead.  We will see if this team's impressive record is for real when they go on the road to Wisconsin.

The Cornhuskers were off last week after splitting their games to Cincinnati and Incarnate Word.  They will look to add another win to their resume with Hawaii.

The Wolverines continued their rough stretch with a loss on Saturday to a pretty solid SMU team at home.  Michigan is in free fall mode right now and desperately need to beat Coppin State to get things settled down.

The Boilermakers faced a quality opponent for the second week in a row and came up short yet again.  This team has the potential to hang with solid teams, but just does not appear to have enough to grab big time wins.

The Wildcats split against Central Michigan and Western Michigan last week, but maintain their #13 ranking largely because Rutgers did enough to stay below them.

The Scarlet Knights lost another home game this week and this time it was against St. Francis.  Everytime Rutgers seems to take a step forward, they suffer another painful loss.  They desperately need to win their next 3 games against teams ranked outside of the Top 100 on KenPom before hitting conference play.