The Big Ten is starting to round into shape and now with the Big Ten - ACC Challenge underway, fans are starting to get a more accurate picture of the teams and how things will shake out this season.  With key matchups against teams like Duke, Louisville, and Syracuse, this could be a big week for the conference.  As of Monday morning, the Big Ten had an overall record of 74-15.

The BTPowerhouse Week 3 Big Ten Power Rankings consisted of 20 voters.  A total of 11 voters came from the BTPowerhouse staff.  The remaining 9 votes came from SBNation's Big Ten team sites.  These sites included: Black Shoe Diaries, Bucky's 5th Quarter, The Champaign Room, Corn Nation, The Daily Gopher, Hammer & Rails, Land Grant Holy Land, Maize & Brew, and On The Banks.  Please note that these rankings do not include the games that occured on Monday evening involving Nebraska and Rutgers.  With that, here are the BTPowerhouse Week 3 Big Ten Power Rankings:

The Badgers had an impressive week leading into these rankings and to no surprise, they still remain the unanimous pick at the #1 spot.  They knocked off wins against Georgetown and Oklahoma in the Bahamas in the Battle for Atlantis tournament and still look the part of a Final Four team.

The Buckeyes remain at #2 this week after beating Campbell and James Madison.  Ohio State's closest game remains their matchup with Marquette earlier in the year where the Buckeyes still won by 11 points.  We will get to know this team a lot more with their game against Louisville this week. 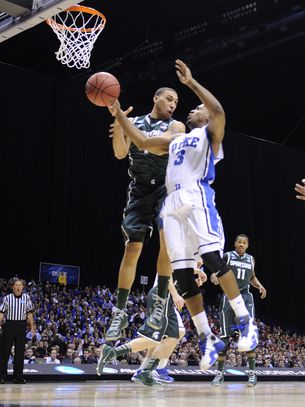 Get all the updates on one of the top non-conference events in college basketball.

The Wolverines went 2-1 in their games last week, but considering that they faced solid Oregon and Villanova teams, that record is nothing to overlook.  In fact, Michigan was literally a bucket away from being in great position to beat Villanova in New York.  Michigan gets Syracuse this week.

The Spartans still have no marquee wins on their resume, but considering that they played competitively with both Duke and Kansas already this year, that is not exactly a bad thing.  MSU did secure a win over Marquette last week, which is their best win so far this year.  They get Notre Dame this week.

The Illini may have been the most impressive team outside of Wisconsin last week.  Illinois played in the Las Vegas Invitational and secured a huge win over Baylor for the championship.  The Bears are the only quality team Illinois has played this season, but that is arguably the best win for the Big Ten all season.  They will look to continue their run on the road against Miami this week.

The Terps jump up to #6 in the rankings after a 4-0 week including wins over Arizona State and Iowa State.  Maryland is already putting together a pretty solid resume and might have the two best wins of any team in the Big Ten at this point in the season.  They get Virginia at home.

The Hawkeyes move up from the #10 spot this week, but improved by less than a point in their average score.  They knocked off three wins last week against underwhelming opponents at home.  Iowa gets another shot at a marquee win with a road game against North Carolina this week.

The Cornhuskers continue their slide this week.  Two weeks ago, Nebraska was ranked #4 on this list and last week they sat at the #7 spot.  A lot of this is the competitiveness of the Big Ten, but another part has been underwhelming play against inferior opponents.  (Note: Nebraska's Monday night win not included).

The Gophers dropped a spot this week and lost about a point in their average, but admittedly, a lot of this is due to the rise of Iowa and Maryland in the rankings.  Minnesota split with Georgia and St. John's last week and will play a pretty average Wake Forest team on the road for a shot at a decent road win.

The Boilermakers have been one of the pleasant surprises in the conference and continue to improve their standing.  They did fall to Kansas State last week, but pulled off victories over BYU and Missouri and are looking like one of the most underrated teams in the conference.

The Hoosiers dropped from the #6 spot this week after a loss to Eastern Washington and an underwhelming win over UNC Greensboro at home.  Indiana has been trending down since their win over SMU who is looking like they may have been overrated in the preseason rankings.

The Nittany Lions pulled off wins over Akron and Bucknell last week.  Neither win was necessarily all that impressive, but Penn State is sitting at 6-1, which is solid for where many perceived this team to end up this season.

The Wildcats narrowly held on to the #13 spot after a narrow win over Miami (OH) and a loss to Northern Iowa last week.  If Northwestern does not improve its play, it will likely be at #14 very soon.

The Scarlet Knights had another wild week with losses to Saint Peter's and Virginia and a win over Vanderbilt.  This team has been hot and cold all year, which is holding them back from moving up over Northwestern.  (Note: Rutgers' win over Clemson was not included).