Check out BTP's power rankings for the Big Ten

The Big Ten is coming off another mixed week of play.  The conference did score some big victories over the past week against teams like Cincinnati and George Washington, but the conference also struggled in matchups against Arizona, Oregon, and Vanderbilt.  Now, with big games awaiting teams like Indiana, Michigan, and Purdue, the Big Ten will look to take a step forward.  As of Monday morning, the Big Ten had an overall record of 108-34.

The Badgers rolled to two easy wins over the last week and showed no movement from the top in this week's power rankings.  Considering the movement from other teams behind Wisconsin, they probably strengthened their hold on #1 for the time being.  Wisconsin is off this week.

The Buckeyes faced two overmatched opponents at home this week and recorded a perfect 2-0 record.  Ohio State lost to the only good opponent they have faced this year, but they will get another shot this week against North Carolina on a neutral court.  This should give a better barometer on if the Buckeyes are for real. 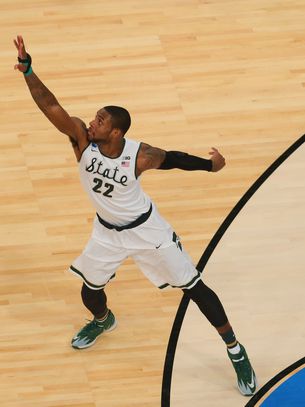 According to a report, the Big Ten's conference tournament will be heading to the Big Apple.

The Terps got two semi-decent teams at home over the last week and reeled off two solid wins.  Neither team will be challenging for the top of the rankings, but both were solid RPI wins and should be valuable as the season continues.  Maryland will get Oklahoma State this week in what should be a very difficult game.

The Spartans are moving towards the top of the rankings despite only playing one game this week.  They scored a pretty easy win over Oakland, but are looking like one of the best teams in the country who has yet to score a marquee win.  They get Eastern Michigan and Texas Southern this week.

The Gophers are quietly proving to be one of the most consistent teams in the Big Ten and have reeled off 5 straight wins including a win over a solid Georgia team and a road win over Wake Forest.  Minnesota gets three pretty easy games to close non-conference play, but look poised to start at 11-2 or better.

The Hawkeyes slid after receiving a beatdown from in-state rival Iowa State.  Though Iowa fans may be a bit down, there are still a lot of things to like about this team and they get a quality Northern Iowa team at home this week.  If Iowa can score a victory, it would be huge for their NCAA hopes.

The Illini easily had their worst week of the season so far and suffered back-to-back losses against Villanova and Oregon.  Neither of these teams is bad, but Illinois was in position to beat Oregon and could have challenged Villanova with a little better shooting.  They get three underwhelming opponents to close non-conference play before going on the road to Michigan.

The Hoosiers are another team that is under the radar right now.  Indiana is sitting at 8-2 with its only losses coming against an elite Louisville team and a surprisingly good Eastern Washington team.  If Indiana can at least go 1-1 in their games against Butler and Georgetown, the Hoosiers would be in great position entering conference play.

The Cornhuskers had an up and down week after losing to a bad Incarnate Word team and beating a solid Cincinnati team.  Nebraska appears to have enough defense to stick with almost anybody they face, but getting enough offensive firepower to compete consistently will be a challenge this season.

The Nittany Lions are starting to get a lot of attention after starting the season at 10-1 and receiving votes in the Week 6 AP Poll.  Penn State beat a decent George Washington team last week and look like they could be poised for a breakout.  They get Drexel and Dartmouth before going on the road to Wisconsin.

The Wolverines followed up their incredible loss to NJIT with another upset against Eastern Michigan and getting completely annihilated by Arizona.  This could be the worst stretch for Michigan in the last 3 to 4 years.  Michigan will have to improve before facing a solid SMU team at home or risk slipping further down these rankings.

The Boilermakers looked like they could score a quality road win over Vanderbilt last week, but fell flat against the Commodores.  Purdue will have to rebound against a good Notre Dame team.

The Wildcats won their only game this week by a final score of 101-49.  They will face Central Michigan and Western Michigan this week.

The Scarlet Knights scored victories against New Hampshire and Manhattan this week and have put together a 6-4 record on the season.  If they can continue to improve, they could be in position to win their next 4 games.