Illinois will be without last years starting point guard Tracy Abrams. Who will start in his place, and will Illinois be able to find a consistent scoring threat.

Share All sharing options for: 2014-2015 Illinois Preview: The Guards

Last year Illinois had to replace the scoring ability of Brandon Paul and DJ Richardson.  Tracy Abrams scored almost exactly the same as he did the previous season and Illinois struggled with scoring until Kendrick Nunn emerged as a scoring threat mid way through the Big Ten season.  Overall Illinois scored 6 points less a game and had a hard time winning games even though they played stellar defense.  This season Illinois enjoys an intake of shooting talent, with the eligibility of Ahmad Starks and Aaron Cosby.  Along with the continued development of Kendrick Nunn, Illinois should be much improved on the offensive side of the floor.

Ahmad Starks will be the starting point guard this season.  Tracy Abrams would have been the incumbent starter but he is out for the season with a torn ACL.  For most teams this would have been a disastrous turn of events, but Starks should be able to fill in seamlessly this year.  Ahmad Starks is redshirt senior transfer from Oregon State that averaged 39% from both FG and 3 point range during his last season.  Starks is a much smaller point guard than Abrams but uses his speed to blow by defenders.  His superior shooting will also allow Illinois to stretch the floor and open up the paint for an improved inside game.  The biggest question mark for Illinois will be if Starks can play defense at the same level as Tracy Abrams.  Abrams has been very good on the defensive and for Illinois and it will be interesting to see if Ahmad can live up to that same high level. 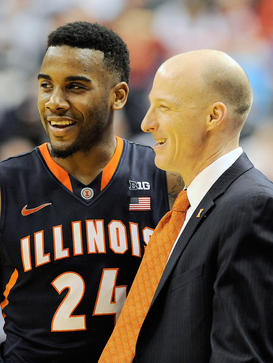 Check out some predictions for 2014-15 Illinois basketball.

Kendrick Nunn will be the starting shooting guard this season.  Before Nunn became the starter, Illinois really struggled finding anyone that could consistently make a three pointer.  Once Kendrick emerged, they had a player that constantly hit 2-3 three pointers a game.  Kendrick also gave Illinois a player who moved very well off the ball and often found open spot in the defense for easy buckets.  His slashing ability also allowed him to get easy layups or get to the free throw line.  Over the off season Nunn had minor surgery on his knee and it has yet to be seen if that will have any effect on his game.  Hopefully, with a year of experience and sufficient rest time for his knee, Nunn will have a breakout year.

Aaron Cosby - If any player on the Illinois bench has the ability to breach the starting lineup, Aaron Cosby is that player.  Depending how Nunn plays during early practices, he might even be able to pass him up before the start of the season.  Aaron Cosby is a redshirt junior transfer from Seton Hall, who averaged  12.6 pts per game while shooting 42% from FG range and 40% from from three during his last season.  Cosby played the point some while at Seton Hall and has the ability to put the ball on the floor and find open team mates.  He will at the very least give you a scoring threat off the bench, and has the chance to become the go to scorer this season for Illinois.

Jaylon Tate - One of the biggest x-factors for Illinois, will be the play of Jaylon Tate.  He was question mark for most of the season, having a number of great games early during non conference play, but disappearing on the bench for the rest of the season.  Tate had a number of games this season with more than 5 assists, but he also shot horribly.  Overall for the season he shot 26% from FG range and 4.3% from three.  4.3% That wasn't a typo.  Illinois had a player that shot 1-22 from the three point line.  If Tate has any hope of making it onto the court this year, he has to find a way to make shots.

Illinois has three players who averaged over 10 points per game during previous seasons.  If all three players can keep up that kind of scoring, Illinois will put opposing teams in a very difficult situation.  While Ahmad Starks is an experienced player, this will be his first year actually getting to play in John Groce's system.  In the end, the ceiling for Illinois will be determined in many ways by the ceiling for Starks.