The college basketball season tipped off last Friday and every team in the Big Ten has played at least one game as of Monday with a decent chunk having played two games at least two teams - Minnesota and Rutgers - playing quality opponents so far.  Overall, the Big Ten has started the season at 16-2 overall.

The Buckeyes rolled in their opener against UMass Lowell and looked the part of a Top 25 squad winning by a 92-55 margin.  D'Angelo Russell also validated some of the hype with a nice first game.  The Buckeyes will have to show they can compete against a tougher team as they get Marquette at home on Tuesday.

Who Is PSU's Shep Garner 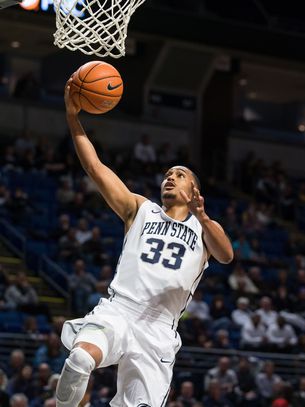 We breakdown the Penn State true freshman who is lighting up the scoreboard for the Nittany Lions.

The Wolverines had a competitive game early with in-state Division II school Hillsdale, but in the 2nd Half, Caris LeVert pulled Michigan away and the team never looked back.  Michigan still looks pretty young, especially upfront, but there is plenty of talent on this squad to win a lot of games.

The Cornhuskers move up a spot this week after handling Northern Kentucky at home in their opener.  Terran Petteway had a big time opening game with 25 points, 6 rebounds, and 1 assist.  David Rivers and Shavon Shields also had big first games.  Nebraska will get Central Arkansas and Rhode Island this week.

Despite being pretty heavy favorites by most in their first game, the Spartans had a pretty big challenge in getting by Navy.  Granted, the game was on the road, but this was easily the biggest reason MSU dropped from #4 to #5 in the power rankings this week.  They will face Duke on Tuesday, which should be quite a challenge.

The Hawkeyes opened with Hampton at home over the weekend and were able to coast to a pretty easy win off a really great offensive performance.  Senior Aaron White had a huge first game and looks like a serious All-Big Ten contender after one game.  They get Texas on Thursday, which should be a pretty challenging game.

The Illini had a very mixed opening weekend.  They looked pretty mediorcre - especially on offense - in their opener against Georgia Southern, but they completely destroyed Coppin State on Sunday.  They will get Austin Peay this week, which should be another "tune up" game.

The Terps had an easy win over Wagner on Friday to move to 1-0 on the year.  The big contributor was Jake Layman who had 16 points, 9 rebounds, and 6 assists.  They will get Fordham this week.

The Gophers are one of only two teams in the Big Ten with a losing record as of Monday, but that one loss came in Puerto Rico to a very good Louisville team.  Minnesota was competitive for segments in the game, but the Cards will simply too much to hang with at least as of now.  Minnesota gets Western Kentucky and Franklin Pierce this week.

Keep up on all the Big Ten recruiting updates.

The Hoosiers blew the doors off Mississippi Valley State in their home opener.  They were a little sloppy for segments, but when you put up 116 on a team, things are usually alright.  Indiana gets SMU later this week.

The Boilermakers had a dominant win over Samford on Friday night and played a relatively competitive game against IUPUI on Sunday.  The big star was freshman Vincent Edwards, who was Big Ten Freshman of the Week.

The Nittany Lions scored two wins in the first week against Morgan State and Fordham.  Fordham isn't a great team, but they were rated #169 on KenPom, so that's at least a somewhat decent win for Penn State.  They get Charlotte this week.

The Wildcats won a relatively competitive game against Houston Baptist on Friday night.  The game had solid performances by Vic Law and Bryant McIntosh, but the team needs to play much better if it wants to move up on this list next week.

The Scarlet Knights are the second team with a losing record as of Monday.  They fell to George Washington at home by 17 points.  However, there are a few things to note about this loss.  First, George Washington is rated #42 on KenPom, which shows that they are a good team.  The other thing to note is that Kadeem Jack was out for the game.  Losing at home by double-digits is never a good thing, but this is actually a pretty excusable loss.  Remember, Rutgers is projected by most to have a bad year and considering these two factors, this wasn't a devastating loss by any means.