Minnesota dropped the Big Ten's biggest game of the weekend to Louisville, but the rest of the conference had a good performance overall.

On Friday night, the Big Ten tipped off conference play with a total of 11 games.  These 11 games were played against a variety of opponents including teams from the ACC, AEC, and Patriot League.  The games were also played in a variety of locations including at home, on neutral courts, and on the road.  Admittedly, most of the games were against inferior opponents, but it was still a chance for fans to check out college basketball for the first time this season and did feature a few interesting games.  With that, let's jump into what happened.

Storyline of the Night

The big storyline of Friday night clearly came out of Puerto Rico.  I will discuss the game action more below, but when you have two teams facing off with head coaches from the same family, people are going to pay attention.  When you add in that both teams are pretty solid and coming off good postseason performances last year, there is going to be even more interest.  The Minnesota-Louisville matchup was certainly the biggest college basketball game last night and could very well be the biggest game of the weekend.  Unfortunately, the Gophers did fall to the Cardinals, but it was a great sight, especially considering the game's location in Puerto Rico.

Game of the Night: Minnesota vs. Louisville

Again, the easy pick was Minnesota's matchup with Louisville.  In fact, the game was selected as the Big Ten Game of the Week by BTPowerhouse as well.  Minnesota fell by a final score of 81-68 and the score was indicative of how the night went overall.  The Gophers were good enough to hang with Louisville for segments, but never had enough firepower to really keep up.  The biggest concerns were Minnesota's inability to compete with the press used by Louisville and some dreadful outside shooting.  Minnesota finished the night at 22.2% from 3PT range and considering that the starting lineup shot 4 of 15 overall from 3PT range, that is a major red flag.  Part of this was certainly some tough defense by Louisville, but Minnesota needs to find a second shooter to go with Andre Hollins.

In terms of individual performances, Andre Hollins led the team.  He had 22 points, 4 rebounds, and 2 assists and finished with a 114 offensive rating.  He looked well playing off the ball and was ability to convert when his number was called.  Deandre Mathieu made some nice plays including some great feeds inside, but he was largely an offensive liability outside of that.  Again, part of this was a great defensive backcourt in Louisville, but one of the biggest things you can do against a press is have good point guard play.  Mathieu finished with 3 assists and 4 turnovers on the night.  The one big player of note outside of these two was Nate Mason.  After some foul trouble in the backcourt, Mason got some big time minutes and had a really good debut for Minnesota.  Granted, he was ineffective at the free throw line and from outside the arc, but otherwise, he looked pretty solid and finished with 10 points, 4 rebounds, and 2 assists on the night.  Mason also had the 3rd highest offensive rating on the team on Friday.

One final note on this game.  Louisville is going to have one heck of a team this year and both Montrezl Harrell and Terry Rozier are the real deal.  There were some plays where it was just obvious that these guys were on a different level.  Even Chris Jones had a good game for Louisville and performed pretty well against what was regarded as a good backcourt for the Gophers.  The Cardinals are also scheduled to play Indiana and Ohio State this season, so they're definitely a team to keep an eye on.

Illinois won by a final score of 81-71.  For as much hype as Illinois has gotten from some - including myself - they had a pretty lackluster first game.  The Illini were tied 31-31 at halftime and there were some whisperings about how this team looked like last year's team.  Notably, the offense definitely looked like it was still a work in progress.  Rayvonte Rice still looked solid with 24 points on the night, but many of the players fans were hoping to step up didn't really happen.  Leron Black scored 6 points on the night and Kendrick Nunn went scoreless on 2 attempts.  These two will ahve to do better if the team is going to take the next step.  Illinois was also outrebounded on the night 41-25 and Nnanna Egwu ended up with 1 total rebound.  If your starting big man ends up with 1 rebound, it's definitely going to be a concern.  We will see if Groce can get the team to perform better in the next game.

Indiana won by a final score of 116-65.  The Hoosiers were pretty sloppy in the first half, which shows in the 19 team turnovers, but eventually, things got settled down and Indiana's pace really separated them from Mississippi Valley State.  True freshman James Blackmon, Jr. led the scoring with 25 points and was money from long range (3/4).  After Blackmon, Yogi Ferrell had a nice game with 15 points and 5 assists and Nick Zeisloft finished the night with 16 points.  Also, Hanner Mosquera-Perea finished with 12 total rebounds, which was good to see on a team that looked to have a lot of frontcourt issues. 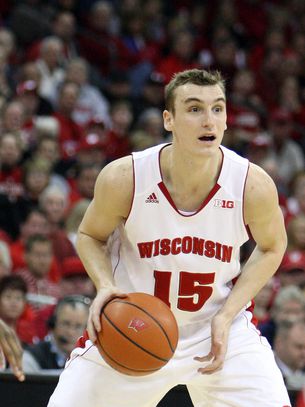 Get all the Big Ten updates.

Iowa won by a final score of 90-56.  This was an offensive firestorm for the Hawkeyes.  Iowa had 5 players score double digits and 7 players had offensive ratings over 100.  The star of the night was Aaron White who scored 19 points, had 7 rebounds, and had 6 assists on the night.  There are probably only a couple of players in the nation that are as diversely talented as White.  One of the areas of concern this season was on the wing, but Jarrod Uthoff had a nice performance with 13 points and 4 for 5 from long range.  If he can keep things going, Iowa should be in good shape.  Overall, a pretty easy win for the Hawkeyes.

Maryland won by a final score of 82-48.  It was a fun win for the Terps were a bunch of players contributed.  In fact, 7 players had at least 20 minutes and no player had over 25 minutes.  It was truly a team effort.  Dez Wells led the scoring with 18 points, but Jake Layman and Melo Trimble also both had double digits.  One thing really worth noting is that Layman had a nice game.  He had an offensive rating of 146 to add to 9 rebounds and 6 assists.  He is a diverse player that could really help this team.  Freshman Michal Cekovsky did play, but had just 14 minutes.  It will be interesting to see who picks up the minutes as Maryland faces more challenging opponents.

Whew. Michigan State won by a final score of 64-59, but boy was it close.  The Spartans had some solid performances from Travis Trice and Branden Dawson, but the offense was a major concern.  Nobody was an effective outside shooter besides Trice and only two players scored double-digits.  Maybe this sounds harsh, but Navy was rated #302 overall by KenPom.  The Midshipmen were not exactly supposed to be a powerhouse this season.  Other areas of concerns were just 10 free throw attempts and a relatively mediocre performance by Matt Costello.  One thing worth noting is that newcomer Bryn Forbes made just 1 out of 6 shots from 3PT range.  Unlikely that continues.

Northwestern won by a final score of 65-58.  Overall, it was a mixed performance by the Wildcats.  Newcomers Vic Law and Bryant McIntosh had exciting performances, but there wasn't a ton going for the team outside of them, especially from long range.  Northwestern shot just 27.3% from outside the arc.  It is worth noting that Alex Olah had 21 points and 10 rebounds, but that stat line might be a tad deceiving.  He certainly didn't perform as well as a double-double would indicate.  Still, if Olah can keep numbers even close to that this season, it would be pretty big for Northwestern going forward.  On a final note, JerShon Cobb scored just 5 points and had just a 74 offensive rating.  Not exactly the numbers fans wanted to see.

Ohio State won by a final score of 92-55.  The Buckeyes were pretty dominant in this one and a lot of guys got involved from the start.  The big player to watch was D'Angelo Russell.  He was the Big Ten's highest rated incoming recruit according to many and he showed it on Friday.  Russell finished with 16 points, 6 assists, and 4 rebounds.  He wasn't great from long range, but a 134 offensive rating is nothing to overlook.  Shannon Scott and Sam Thompson also put in pretty solid games and Thompson was very efficient.  Ohio State doesn't necessarily need either of those guys to be huge offensive weapons, but if they can produce like they did Friday, that would be big for the team.  Overall, a pretty big beat down by the Buckeyes.

Penn State won by a final score of 61-48.  This was actually a relatively close game, especially early on.  Penn State was up just 27-23 with 41 seconds in the 1st Half and led by just 7 for the early portions of the 2nd Half.  That aside, the Nittany Lions did have some nice moments.  DJ Newbill led the team in scoring with 17 points, but it was Shep Garner that turned many heads.  Garner is a freshman and made quite a splash with 14 points and some nice play inside.  Garner's 117 offensive rating was also 2nd on the team.  Going forward, some areas of concern are rebounding and pretty inconsistent shooting.  Penn State won the rebounding margin, but it was just 40-36.  The Nittany Lions also shot just 38.5% from outside the arc on 13 attempts.  People aren't jacking up a ton of shots, but they're going to need to be a bigger threat from there moving forward.

Purdue won by a final score of 80-40.  For Boilermaker fans, this one probably felt good given the team's recent struggles.  The big player in this game was freshman Vince Edwards.  Edwards was effective offensive with a 148 offensive rating and led the team with 13 points.  Edwards also grabbed 8 rebounds and went 3 for 4 from outside the arc.  He definitely has a future here.  Other guys to note are Isaac Haas and Jon Octeus.  Haas had 11 points and 8 rebounds in 20 minutes and will be a contributor this season.  Hammons or not, Haas is just too good.  Octeus didn't make the splash many hoped, but he does have potential going forward.  The minute distribution is going to be the thing to watch for Purdue going forward.

Wisconsin won by a final score of 62-31.  This game was a little sloppy to start, but the Badgers never looked back once they got running.  For anyone hoping to take down Wisconsin this year, this was probably not what you were hoping to see.  Sam Dekker and Frank Kaminsky looked like All-Big Ten players.  On top of that, Kaminsky looked like a dominant force.  Not only did he have a double-double, but he was also had a 37.0 assist rate.  When a team's big man has a higher assist rate than its guards, things are going pretty well.  Wisconsin did have a few defensive issues during the game, but this was too easy.