How far can Purdue's backcourt take it without the experience of the Johnson brothers leading the way?

Share All sharing options for: 2014-15 Purdue Preview: The Guards

It's not unduly harsh to accuse the Purdue Boilermakers' backcourt of inefficiency last season. The six guards who averaged at least 10 minutes per game combined for the following shaky figures: 39.2% from the floor, 34.0% from three-point range, 69.3% from the foul line and 7.4 turnovers per game. Purdue finished 10 games with effective field goal percentages (eFG%) above 50, but six south of 40.

This year's Boilers must make do without leading scorers Terone and Ronnie Johnson, but it could be addition by subtraction. The brothers were two of the backcourt's three worst eFG% shooters. Point guard Ronnie boasted a worse offensive rating than any guard other than Bryson Scott. The Johnsons also carded the two worst defensive ratings on the entire team. Their experience, particularly that of the senior Terone, will be missed, but their production is eminently replaceable.

Now the question becomes: Who's going to do the replacing?

Purdue's new man of mystery can play. Octeus' numbers from Colorado State last season would have placed him first on Purdue's team in scoring, second in rebounding, third in assists and second in FT% among shooters with 50 attempts. He posted a better true shooting percentage than any Purdue guard except Rapheal Davis or Kendall Stephens, and his turnover percentage—while frequently working as CSU's point guard, mind you—was identical to that of Stephens, a spot-up specialist. For a team that routinely shot itself in the foot with turnovers and other bad decisions, Octeus appears a godsend on the surface.

Now, here's the million-dollar question with Octeus. This is a player who made it abundantly clear that leaving Colorado State was "a business decision," designed to put him against higher-level competition to impress NBA scouts. According to Octeus, conversations with UCLA coach Steve Alford indicated to him that he'd be the Bruins' starting point guard had he been admitted. It's difficult for me to wrap my head around the idea that he'd have landed at Purdue without Painter making similar promises, unless the time frame simply led him to jump at the first power-conference school that would have him. 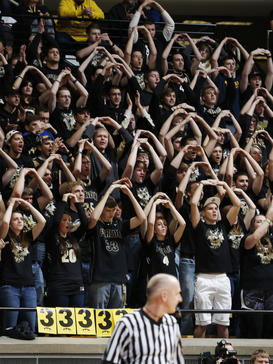 Who can be the x-factor for the Boilermakers this season?

Octeus' naked ambition could be a double-edged sword for the Boilers. On one hand, his drive to reach the Association could rub off on Purdue's occasionally-dominant, sometimes-somnambulent big man A.J. Hammons. A positive work ethic from Octeus may remind Hammons that while the NBA will still allow him in the door because of his size, it may not allow him to sit down and get comfortable unless he's willing to work. The potential downside could be Octeus going into business for himself, working doubly hard to show out for the scouts and sacrificing the team's needs for his own career advancement. Purdue fans may not want to expect it, but they didn't want to expect Ronnie Johnson to storm out of town in a selfish snit, either.

If Octeus plays the system Painter wants, plays it well and motivates Hammons to crush every opponent Godzilla-style, Purdue can squeak into the NCAA tournament. If not, Boiler fans will sweat out NIT selections, knowing full well that AD Morgan Burke probably isn't ponying up to send the team to the CBI again.

In four minutes of scrimmage time this past weekend, Stephens stroked four three-pointers. When he's hot, Stephens is capable of turning a game around with a string of bombs. When he's cold...well, when he was cold last season, Purdue usually found itself in deep trouble. He ended the year by shooting 29% from deep over the Boilers' final six games, all losses. Two of the six would have flipped to victories with just one more made triple from Stephens, including a two-point loss to Ohio State in the Big Ten tournament.

The biggest obstacle in Stephens' way this season will be of his own making. He shot nearly 77% of his field goals from behind the arc, with only 10 attempts near the rim according to Hoop-Math.com. This isn't anything new at Purdue, home of relentless chuckers D.J. Byrd and Ryne Smith. However, neither of those two players truly thrived as offensive threats on the level that Purdue appears to need from Stephens. In fairness to Kendall, this did improve late last season. He averaged four two-point attempts over his final four games, which doesn't seem like much, but keep in mind that he tried only six two-point shots over THE ENTIRE MONTH OF DECEMBER. A Stephens who can attack the basket and get himself to the line, where he's positively lethal, can easily lead the team in scoring.

Aside from Hammons and potentially Octeus, Stephens may be the Boilers' most important scoring option. His 6'6" frame needs to become an asset inside the arc and potentially on the glass, rather than predictably camping out at the three-point line and awaiting his next shot.

(If you're looking for Rapheal Davis, he'll be included with the "wings" preview.)

The Purdue contingent here on BTP has already written a good deal about Mathias. He's expected to enter and take off the pressure Kendall Stephens has been under as Purdue's lone reliable shooter. There's the kind of passing skill that Painter has raved about to anyone who'll listen this summer. There's the coach-like eye for the game that even veteran teammates have been able to make use of during early practices, allowing Mathias to contribute even as he battles various physical ailments. It begins to sound like we're all expecting him to do everything short of sell popcorn.

While all the expectations are probably unreasonable for this season, Mathias does look like the kind of unheralded prospect who has a nice four-year career, becomes a favorite at his school and perhaps spends a few years making a living overseas. If you're into comparisons, the best case for Mathias could eventually—not this season, but eventually—resemble someone like Ron Baker from Wichita State. Baker's a third-team Blue Ribbon All-American as we enter this season. Lofty goal, but possible—if Mathias stays healthy. Remember, various physical ailments.

Scott was the kind of player to make a coach wish basketball had football-style platoons of offensive and defensive players. Defensively, he was one of Purdue's most aggressive ballhawks, leading the team with 30 steals. Foul trouble was an issue some nights, but in Scott's defense, he was a freshman opposing the likes of Marcus Smart, Aaron Craft and Deandre Mathieu in those games. Offensively, however, Scott was frequently lost. He suffered through 27-percent shooting in Big Ten play, committing 4.1 turnovers and 4.7 fouls per 40 minutes.

This season, Scott has to prove himself as a shooter, passer and ballhandler, all while keeping himself from lapsing into careless fouls on the other end. ("Is that all?" I know, right? Why not ask him to learn Sanskrit and save the Bolivian rain forest while he's at it?) Of course, the better he does at the latter while still being a disruptive all-purpose pest, the more Purdue fans will forgive him the lack of offensive fireworks. After all, Boiler backers still revere Chris Kramer, who was hardly an offensive superstar.

Kramer didn't shoot much, but he knew how to select the right shots. Scott's first battle will be to remake himself as a pass-first lead guard, taking only the best looks for himself instead of raging headlong into the teeth of the defense and throwing up contested shots in some misguided effort to one-up Ronnie Johnson. Scott's offensive improvement may be more dependent on others—i.e. the shooters spacing the floor—than any player on Purdue's roster except A.J. Hammons.

When the Purdue coaching staff speaks of Thompson—which doesn't seem all that often since Jon Octeus came aboard—the diminutive freshman draws praise for his intangibles like leadership and communication. As for his game, Thompson will likely distinguish himself by not standing out, if that makes sense. His best role will be to find the most direct route to put the ball in Hammons' hands, then wait for a kickout and hope for an open look at the basket.

Thompson carries a similar frame to former Purdue standout Lewis Jackson, but he's a much better shooter than LewJack was when he arrived in West Lafayette. Thompson also resembles Bryson Scott in that both were primarily scorers for their high school teams, but Thompson should have an easier transition to a distributor role than Scott has experienced thus far. The newcomer would have been given minutes out of necessity before Octeus arrived, but now he'll have to fight for time.