What can Hawkeyes fans expect (or boldly predict) for this season?

Share All sharing options for: 5 Bold Predictions for Iowa in 2014-15

Being bold and making absurd predictions is part of what makes sports great. No one could have predicted that UCONN would have won the National Championship last year, or that a Michigan squad that lost two starters to the NBA would have finished 15-3 in the best conference in the country. These predictions are fun, a little lighthearted, and will hopefully stir up some debate.

Iowa will win 22 games or more this season

After last season's 20 win season and tumultuous decline down the stretch, morale is not at an all time high in Iowa City. Roy Devyn Marble is gone, but a sizeable chunk of the rotation returns and is one year more experienced. Iowa is due for some better breaks this season after the way last year's ended, and I think the 22 win mark is a tough task but reasonable for this team. Besides for North Carolina and a neutral site game against Texas, the non-conference schedule is super reasonable. If they sneak by and win one of these games, they will already be 13-1 on the year. Looking at conference play, they start off with a brutal stretch of Ohio State, Nebraska and Michigan State. The season then gets considerably easier, with Illinois, Penn State, Indiana and Northwestern as the last four games of the season. If they can win at Purdue and sneak a few more wins in, they could be at 20 or 21 before the Big Ten tournament, and either a win in the Big Ten tournament or post season tournament will get them to 22 and above the 20 win mark of last season.

Fran McCaffrey is one of the most entertaining coaches to watch during a Big Ten basketball game. Some fans love getting on Fran's nerves more than others, such as an unnamed Michigan fan in this picture below, but Coach McCaffrey's sideline tirades have been well documented. Here is an amazing video of McCaffrey getting the boot against Wisconsin last year in a game that the Hawkeyes were winning at the time. Wisconsin hit the free throws and ultimately won the game, so McCaffrey's tizzy fit did not send the message it was supposed to. Looking at Iowa's schedule, I can see a few games where Fran could lose his mind. Playing at Madison Square Garden on Broadway is always a treat, and against an excellent team like Texas and freshman Myles Turner, there's a good chance for Fran to lose his cool. Another surefire bet is at home against Iowa State, where the refs will probably try to make it interesting for the in-state rivals. Lastly, the Michigan students really seemed to rile Fran up last season, and I think we could see him being asked to leave in that game as well. 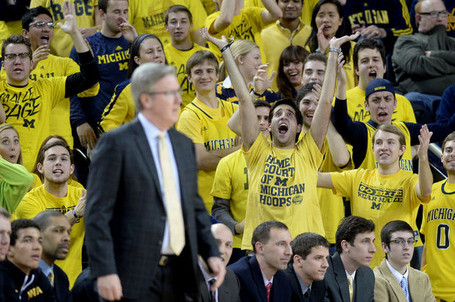 Aaron White will be a First Team All Big-Ten member

Aaron White's importance to Iowa was well documented here, so I won't belabor the point. But White truly has the type of talent to go from role player to solid contributor to Big Ten All-Star in his fourth year in Iowa City. White has elevated his game tremendously every year, and is looking to add a much improved three point shot to his arsenal along with his mid-range game and offense rebounding. White will have to compete with a lot of excellent forwards for this spot, including Terran Petteway, Sam Dekker and Frank Kaminsky, but has the ability to leap frog at least one of them to snag a spot on the coveted roster.

Iowa will beat North Carolina in the Big Ten/ACC Challenge

The Big Ten has had moderate success against the ACC over the last few years, splitting last year's Challenge 6-6. This year I expect the Big Ten to have great success, with a lot more favorable matchups on the schedule. However, Iowa was given the daunting task of traveling to the Dean Smith Center to take on the Tar Heels. North Carolina lost P.J. Hairston, James Michael McAdoo and Leslie McDonald to a team that finished 24-10 and 13-5 in the ACC. They bring in Joel Berry, Justin Jackson and Theo Pinson, all players ranked in the top 20 according to ESPN, but North Carolina always seems to struggle at the beginning of the season, even at home.  The Heels dropped a home game against Belmont and a road tilt at UAB before December 1st, and Iowa is a considerably better team than those two. I expect Fran McCaffrey to have his guys amped up for that game, and I wouldn't be too shocked if the Hawkeyes left Chapel Hill with a win.

If you haven't watched him play before, Gabriel Olaseni is the definition of a blue-collar player. Iowa doesn't run any plays for him, but he has found a way to become an impact player at both ends of the floor for the Hawkeyes. Olaseni is one of the few Division I basketball players that hails from England, not a surprise considering the country's largest sports are soccer and cricket. A soft-spoken, talented young man who plays the game the right way (and even admitted he was scared of McCaffrey his freshman year), it's hard not to root for Olaseni even if you're not a fan of the Hawkeyes.

The Hawkeye Way - Gabe Olaseni (via University of Iowa)